Weekends sure seem to be flying by these days.  I spent this last one in Atlanta with lots of blogging friends at the Haven blog conference.  I can sincerely tell you that the women of Haven are so genuine and fun to be around.  I’m so glad I went and I encourage any of you thinking about going next year to for sure go!
If you’ve been following my blog for the last three months, you know I was preparing for my second NPC bikini contest.  I competed for the first time last July and I got the itch to do it again mostly because I needed to get back in shape after falling off the wagon after my first competition.  I had a harder time sticking strictly to my diet this time (I’d say I did 90%, but I had dessert cheats along the way that I shouldn’t have had).  And that’s the thing about a contest like this, when you get there for the day of the show, you can surely tell who cheated and who didn’t.  Or maybe whose been training longer because their bodies are just crazy good.  The competition in Houston was fierce this year with so many phenomenal competitors.  But, committing to competing in a bikini contest also caused me to train harder and eat better than I would have if I didn’t have the contest looming.  That’s the real reason I competed, because the contest day has never been my favorite part.

This year, I placed 9th in the Bikini Novice division and 13th in the Bikini Masters division (ages 35-44).  I’m proud of what I accomplished and definitely feel like the women who placed above me deserved it.  I’m not crazy about my stage pictures, but I figured you might want to see them.   It’s wild how nervous you can be with only a few seconds on stage, but this audience was really big and intimidating.  I wish I was smiling more in the photos.  My coach, John Sherman, even texted me later and said I needed to smile more at the night show, which I did. My cousin (a fellow competitor) gave me a tip to start smiling right before going on stage and then placing your tongue against the back of your two front teeth/roof of your mouth to hold your smile in place.  It worked later! 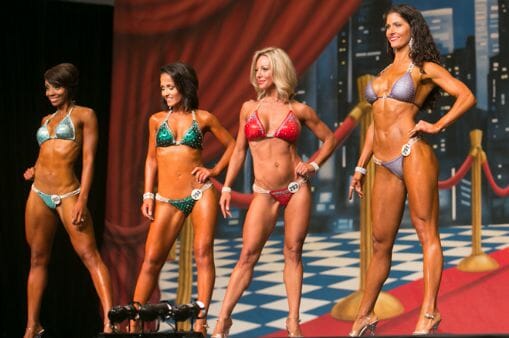 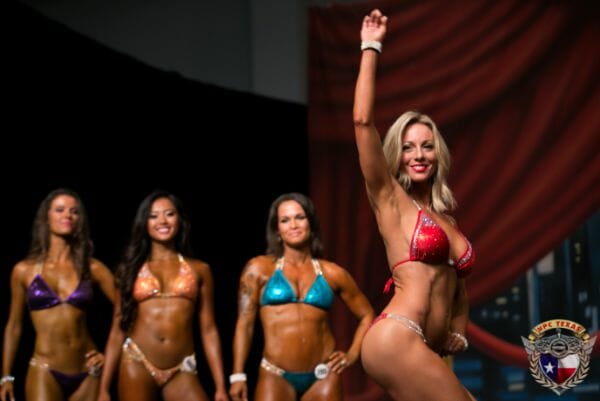 I loved my red suit that I got from Angel Competition Bikinis.  I thought they did a great job and I liked the dangly rhinestone side connectors.  I ordered completely online, so I just sent my measurements in and they custom made the suit. I was nervous about the fit, but it ended up fitting perfectly! 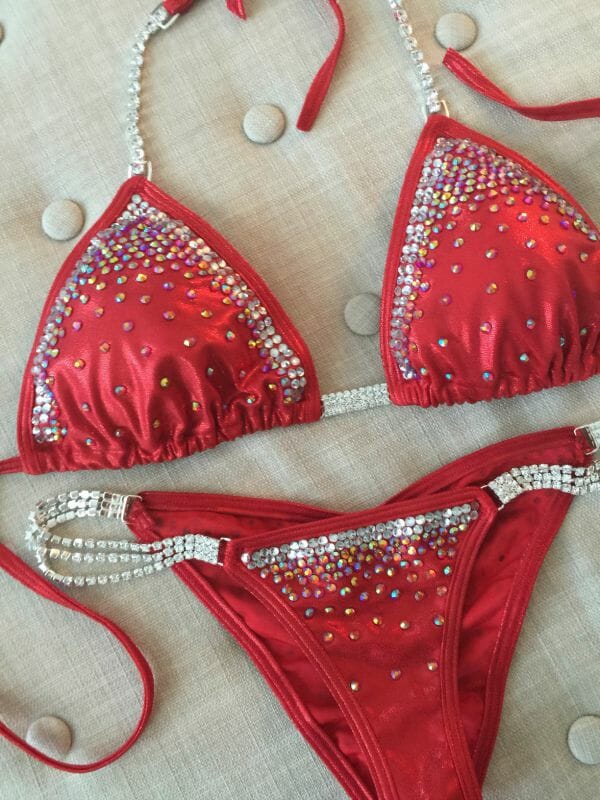 I trained for 12 weeks and took weekly progress photos along the way.  I started at about 25% body fat and got down to about 18% when I competed.  Ideally, I would’ve gotten down to 15%, but that would have taken me another month probably. 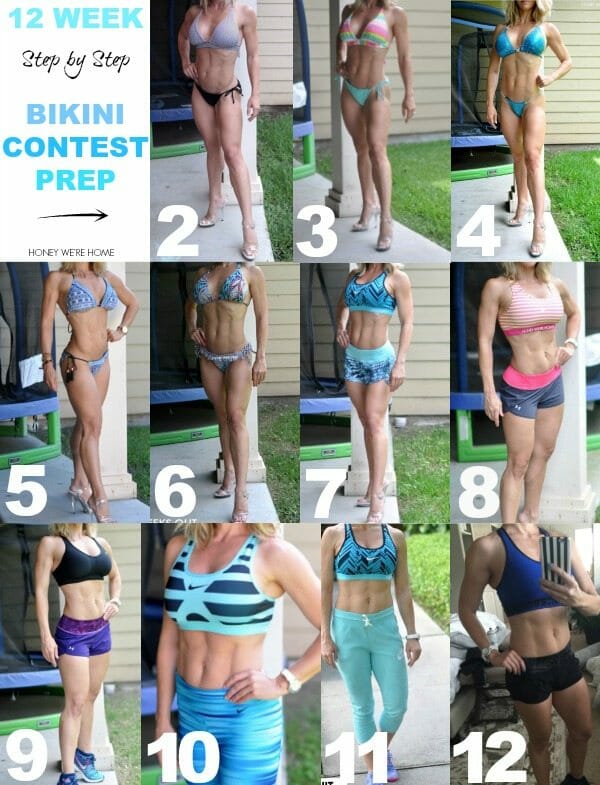 Friday before the contest, my friend Jessica (who was also competing) did my spray tan (2 coats in the morning and a third that night).  She happens to own a spray tanning company Beautifully Bronzed, so that worked out perfectly.  We rinsed off in between the 2nd and 3rd coats and I also rinsed on Saturday morning, but in retrospect, we shouldn’t have.  It’s better to be ridiculously dark (like embarrassed to be seen in public) in person to look like a great tan on stage because those stage lights are so bright they wash you out and you look so much better darker- it shows your muscles and definition better.  This picture below is after the first two coats on Friday morning. 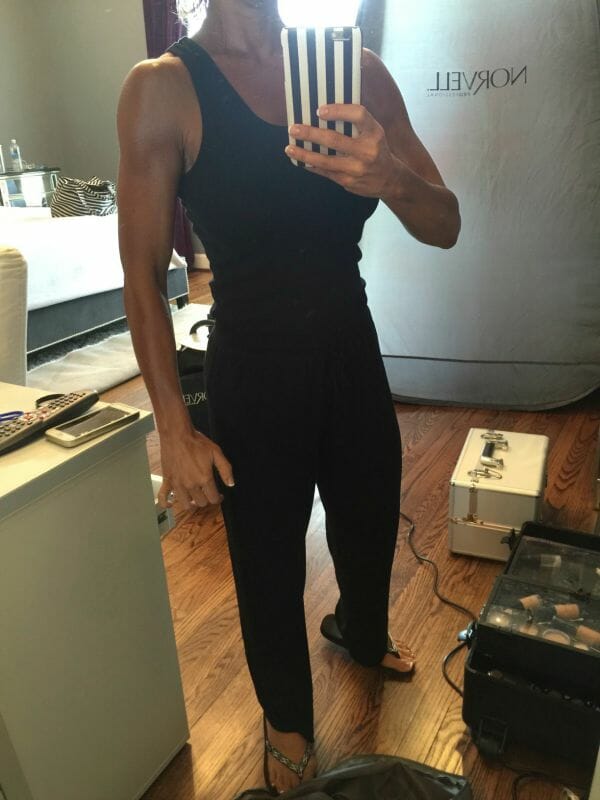 I can tell you that two coats of spray tan is sticky and takes forever to dry!  It starts rubbing off on everything and is really hard to keep even throughout your body.  And, the next day especially you start to stink.  It’s one of the icky things about competing.  Then, it takes forever to wash off.  About a week and during that week you look all splotchy until it comes off completely.

The actual day of the contest was the longest day.  I rode with Jessica and we had to be there by 8:30 a.m.  I packed everything I needed to do my hair and makeup, including a small stand up vanity mirror, warm jacket (it was freezing in there), bottled water, an apple, my bikini and heels. 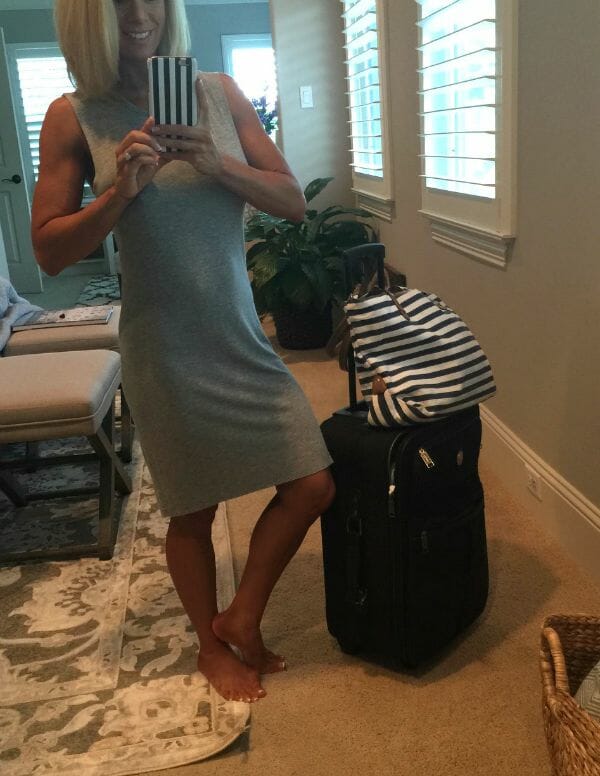 To save money, I did my own hair and make-up this time and I just did it at the auditorium while we waited.  I ended up deciding to curl my hair at the last minute to give it more body. 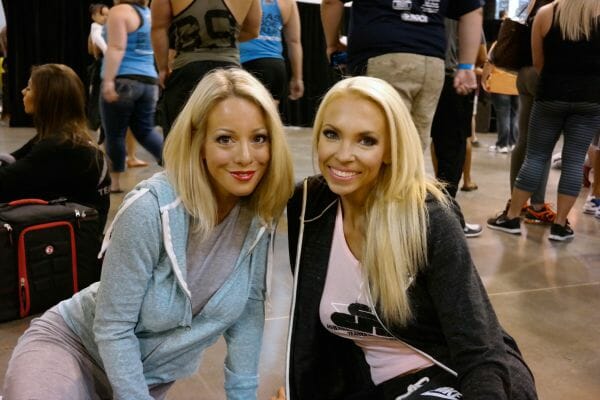 There’s a lot of waiting around at a contest like this while the other competitors are on stage and they always put the bikini division last.  I’m so thankful that several friends came to support me.  I know it’s not the most entertaining thing waiting around, but I think they had some fun watching the physique guys on stage. 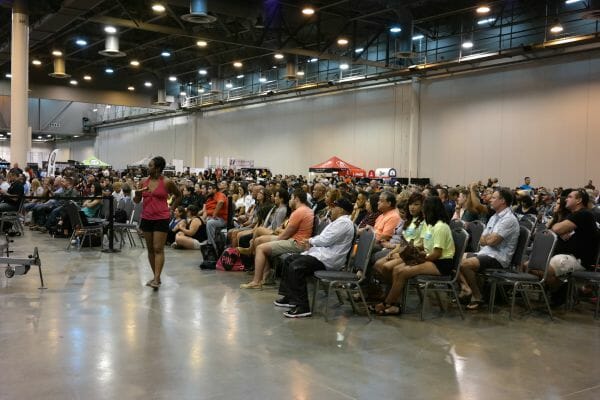 Backstage is full of nervous/excited competitors getting final coats of spray tan/glaze and the guys are doing push-ups and the girls are practicing their posing and touching up hair and make up.  It’s really crazy back there. 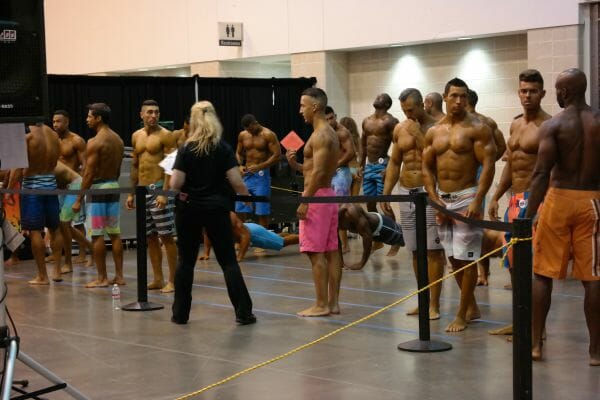 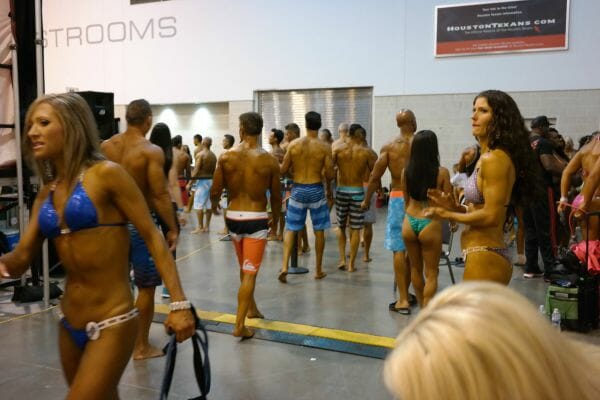 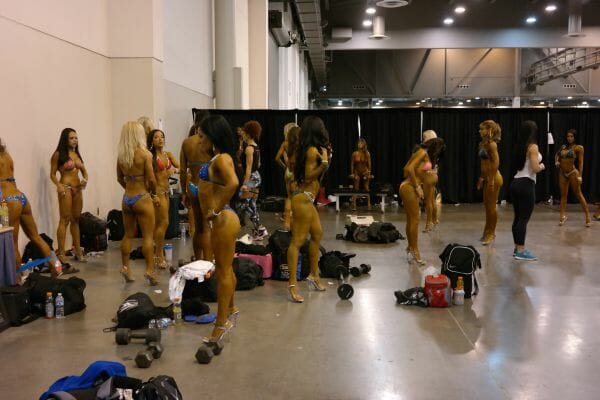 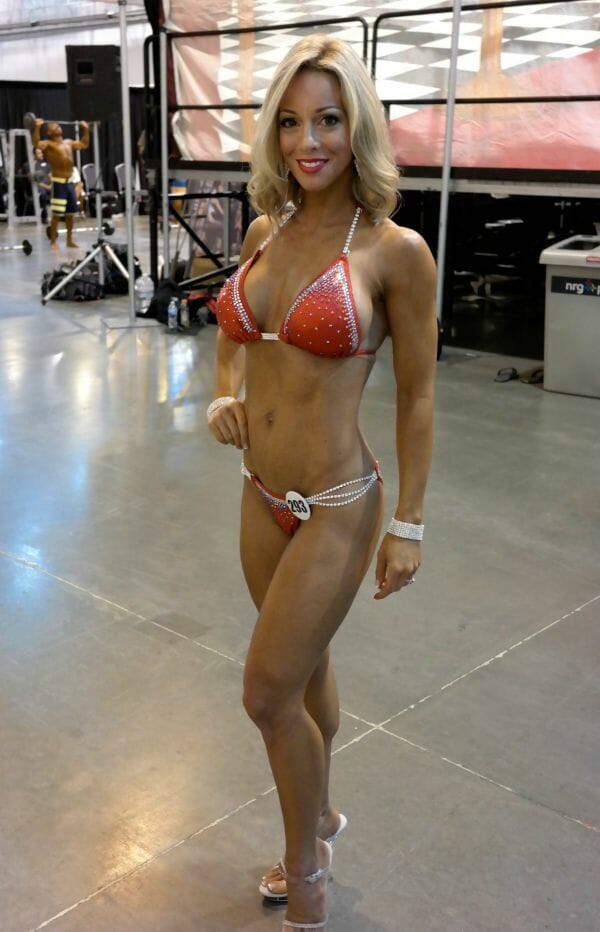 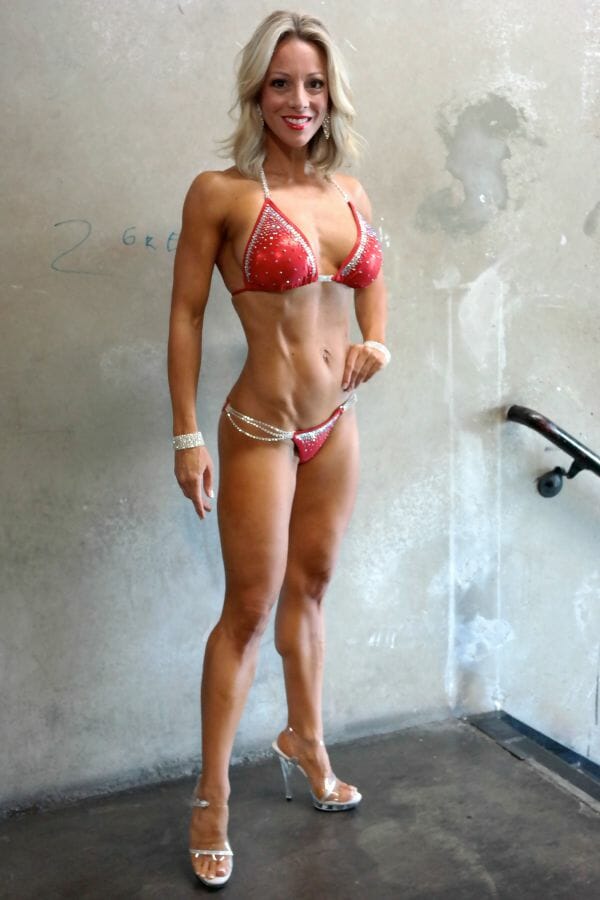 We ended up going on stage at about 2:00 and were done by 3:30.  Jessica did so well and looked absolutely gorgeous.  She place 11th in both Bikini Novice and Bikini Open.
Then, we had to be back at 5:30 for the night show, which lasted until about 10:30 p.m.  Talk about a long day!  I was just so ready to be over it by the time it ended!  Of course I had my little good luck charm with me and he was the sweetest. He’s actually giving me a kiss in the picture below. 🙂  My hubby was a trooper too, hanging with us all day.  He bought the celebratory pint of Haagen Dazs Carmel Cone ice cream I’d been dreaming about! 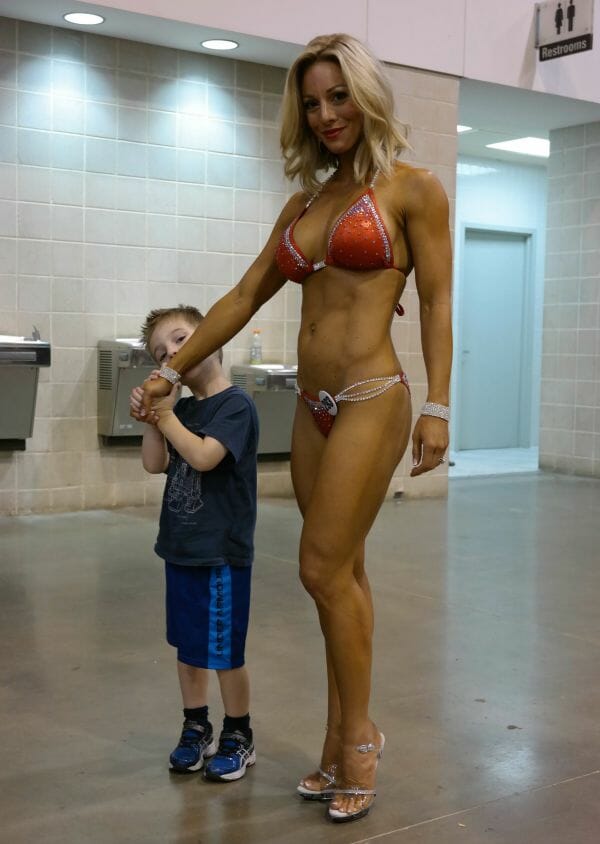 Thank YOU SO VERY MUCH for sticking with me throughout these last 3 months as I prepared and shared my fitness journey with you.  Reading your encouraging and supportive comments here and on my Instagram have given me that extra boost of confidence I needed when I was feeling insecure.  I appreciate you so much!