Remember when you first moved into your home and you had clean, never-been-used spaces and empty closets?  These spaces represented possibility, a fresh start, a chance to start anew . . . 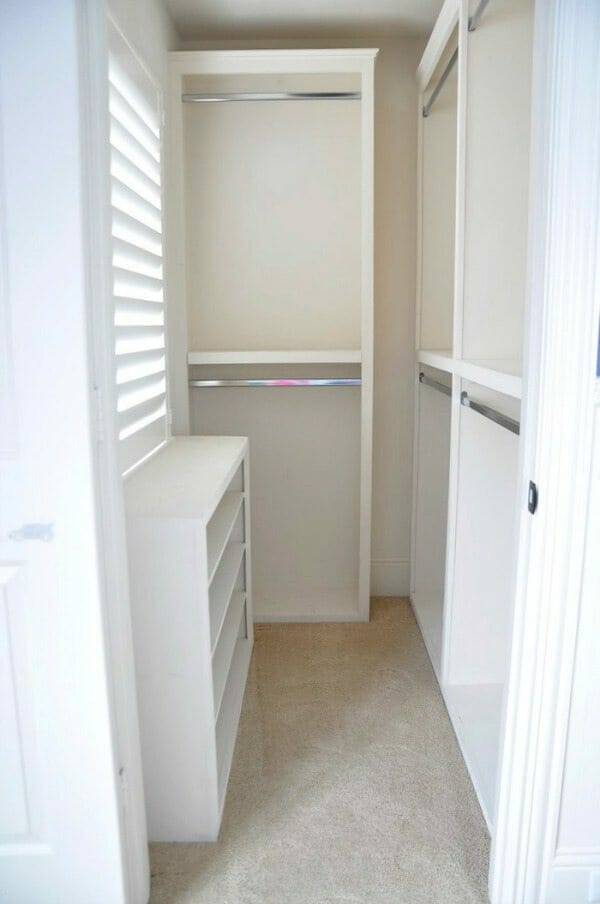 And then somehow, over the years, you end up stuffing who-knows-what into those spaces and then just shut the door so you don’t have to deal with it. But, behind closed doors lurks a closetful of clutter. 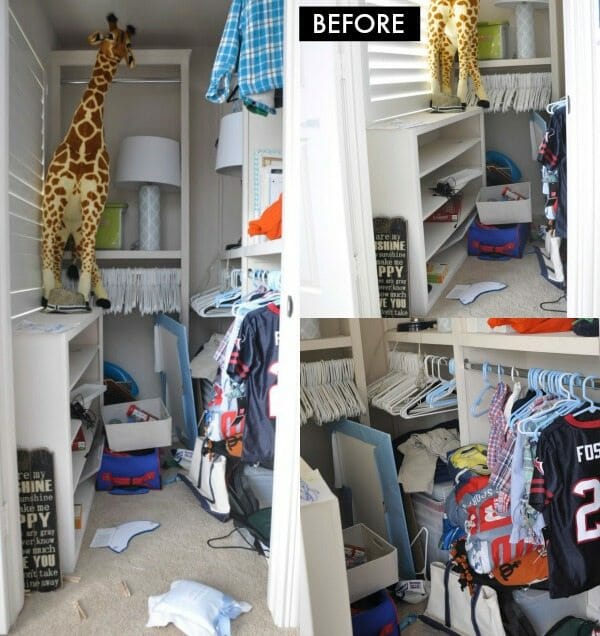 In my son’s room, he hasn’t been utilizing his closet because I never set it up for good use.  He keeps most of his clothes in the drawers in the bathroom and his pajamas in the dresser in his room, so only his few button-down shirts were hanging.  Everything else was just stuffed in there when there wasn’t another good place for it.
So, I took everything out . . . 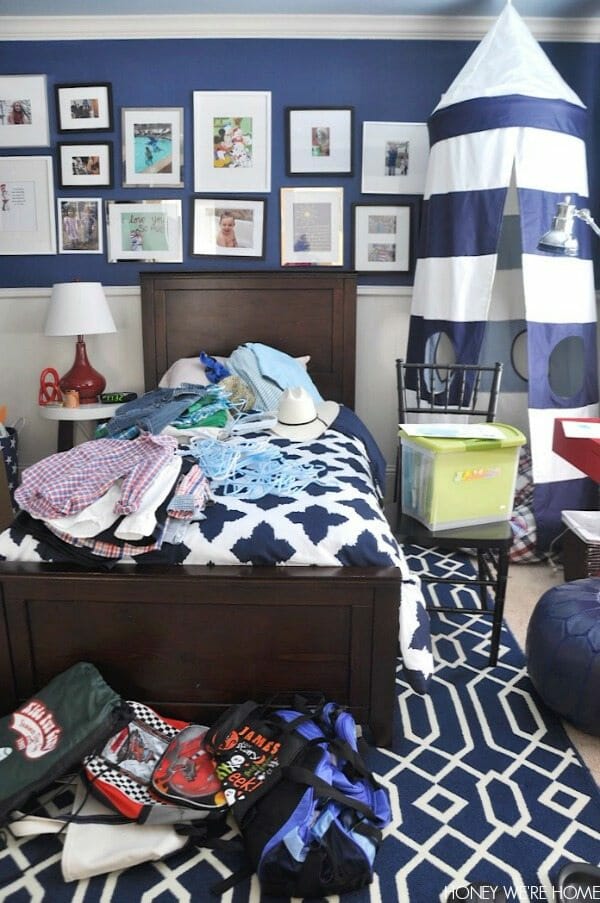 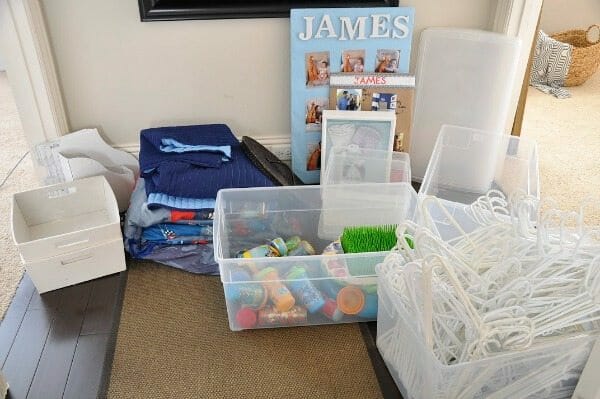 Then I vacuumed the floor and shelves.  (If you look closely, you’ll see my son has inherited my fascination with the electronic labeler and I now find labels all over the house. This one on the wall outside his closet door says “James”.) 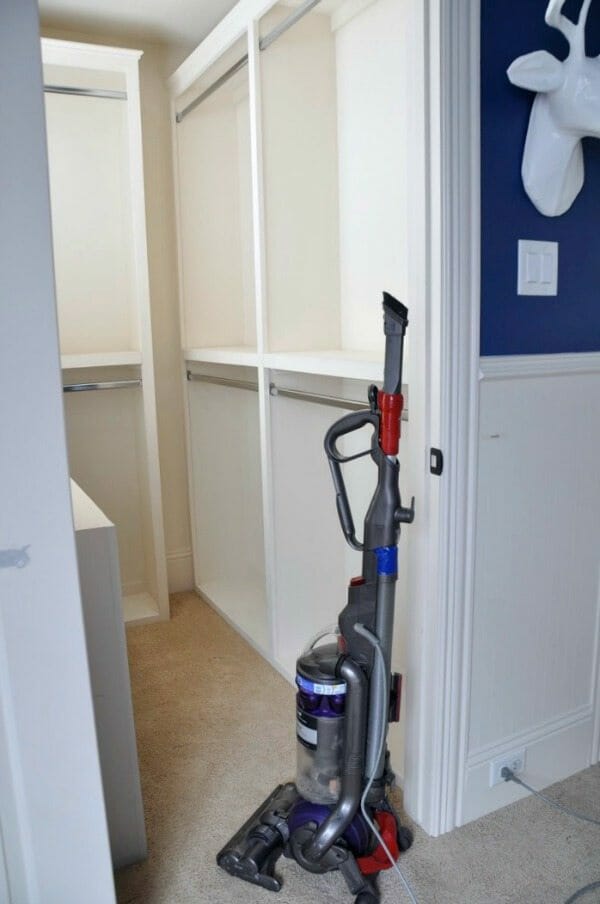 When you get down the the nitty gritty of organizing a space, the part that overwhelms and keeps most people from tackling the mess is “What do we do with everything left over- the things that don’t belong back in the space?”  That’s the hard part because the organizing doesn’t just stop with the kid closet, for example.  You then have to find space for the rest of the stuff.
This is why I’ve become very willing to donate, sell or trash the things we no longer need.  And seeing all the things that have gone out the door this year since doing this “Top 10 Organization” series is making me so much more mindful of the things I bring into the house.
Would you believe I went to Target last week and only bought what I came for?!  That’s a big deal! Especially when I spotted things like this adorable doormat.  I just kept thinking, “Is this going to be one of those things I’m donating/tossing/selling a year from now?”
I’m truly trying to keep a household where there is a specific place for everything and we don’t have too many “things” we don’t need/use/love.  That being said, however, having a place for everything might mean that all James’ little toys went in one bin because trying to organize them by type would’ve made me a crazy woman when I was organizing his playroom.  I’m fine with things being “mostly organized” or “generally organized”.  Total chaos, like this “before” closet, makes me anxious. I guess I wasn’t too anxious though- it’s basically been this way for 4 years!
But not anymore! 🙂  And when James saw it, he was so happy too.  He said, “Mom, you cleaned my closet!” Now, he’s got all of his button-down and polo-style shirts hanging, which frees up some room in his drawers. The white hangers were given to my brother.  We had so many because I switched them out in my closet for the slim, felt ones.

James’ hats and bedding are in the canvas bins that we’ve had since he was a baby.  I keep those during the big playroom purge, but they’d been in my laundry room, waiting to see if I had use for them before donating.  Glad I kept those! 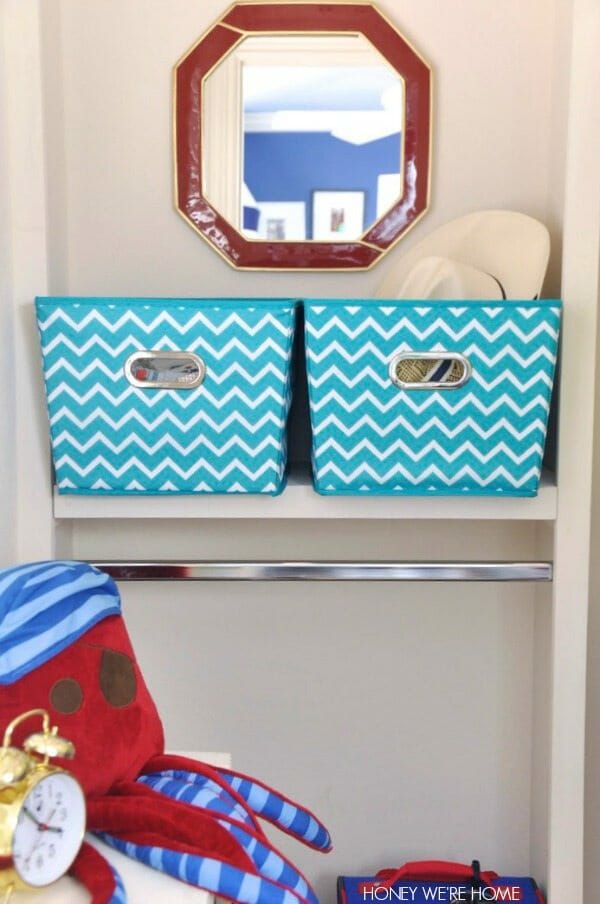 The file folder is for James’ personal papers and schoolwork.  You can see how I got that under control here. 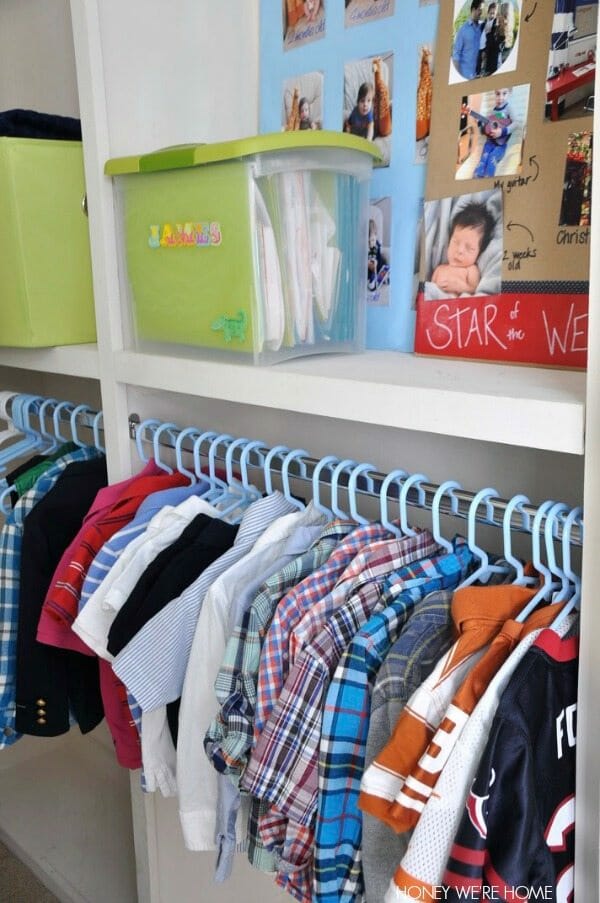 Now we are actually using the built-in bookshelf to hold some of his books.  We had moved almost all of his books to the playroom, but I do prefer to keep some in his bedroom so we don’t have to go to another room to grab a book to read before bed. 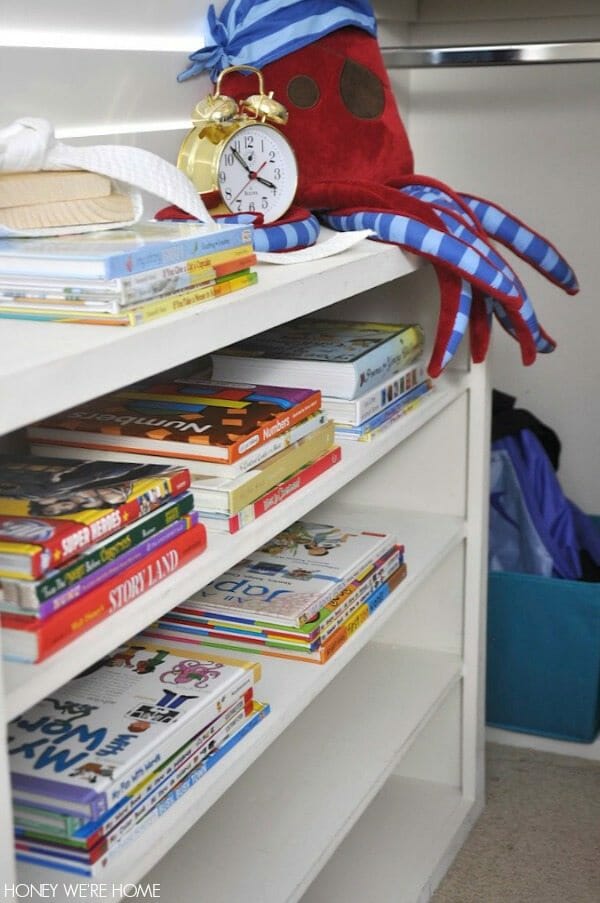 I also moved his white karate belt and board he chopped with his hand into the closet.  I want to preserve this and it kept getting tossed around in the playroom. 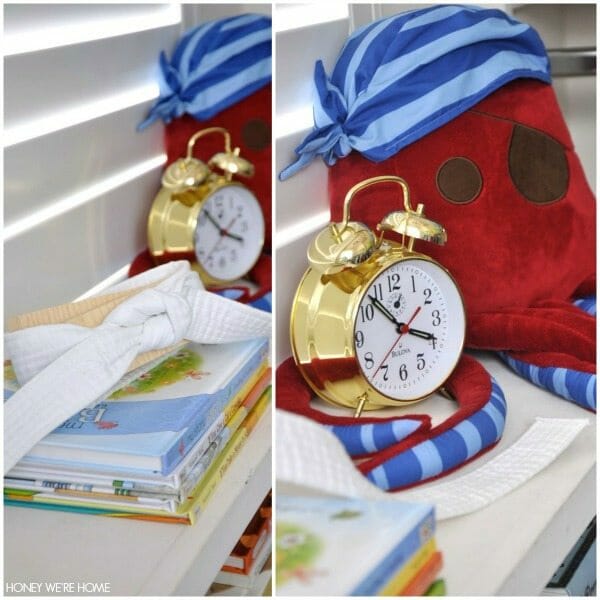 A few sentimental moments remain, like the shadow box I made when James was a baby that holds his hospital outfit and tiny footprints, the month-by-month 1st birthday collage, and the photos he chose to bring to school when he was “Star of the Week” this year. 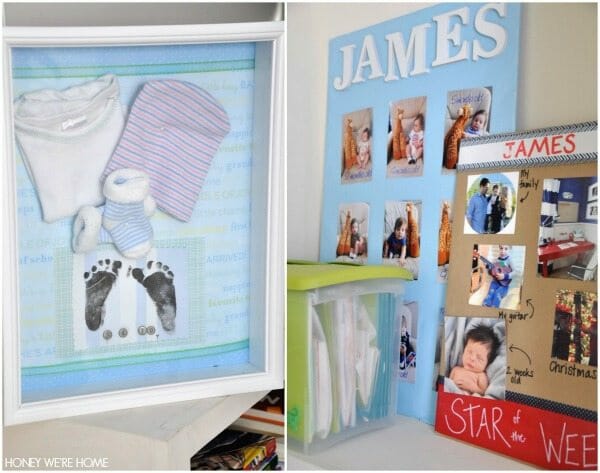 And because this was technically, “kid clothes” Top 10 Organization Challenge, I went though James’ drawers and cleaned them out, and sorted through all the clothes so we could see what fits and what he’s outgrown.  A yearly chore when you have children.  Now I’ll be able to tell what he really needs for Spring/Summer.
When I took everything out of the drawers I was surprised to see so much dust and dirt.  Is it lint??  I mean, this is where the clean clothes go.  Oh well, a quick sweep of the vacuum got it all out so we could start fresh. 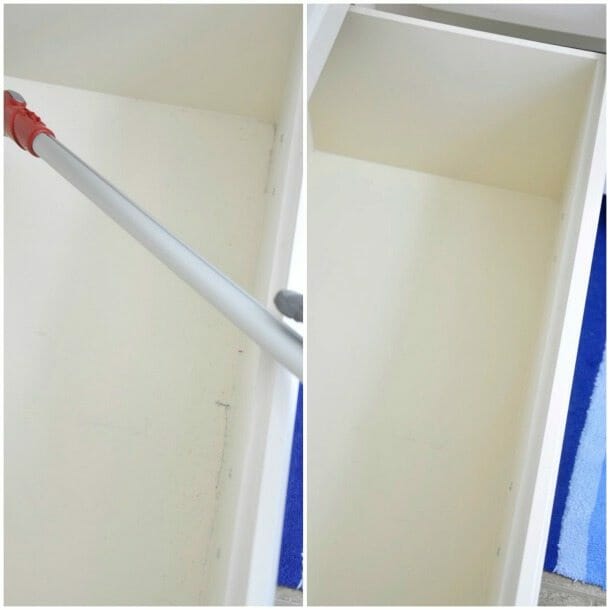 Looks like most of his shirts still fit and he has plenty. 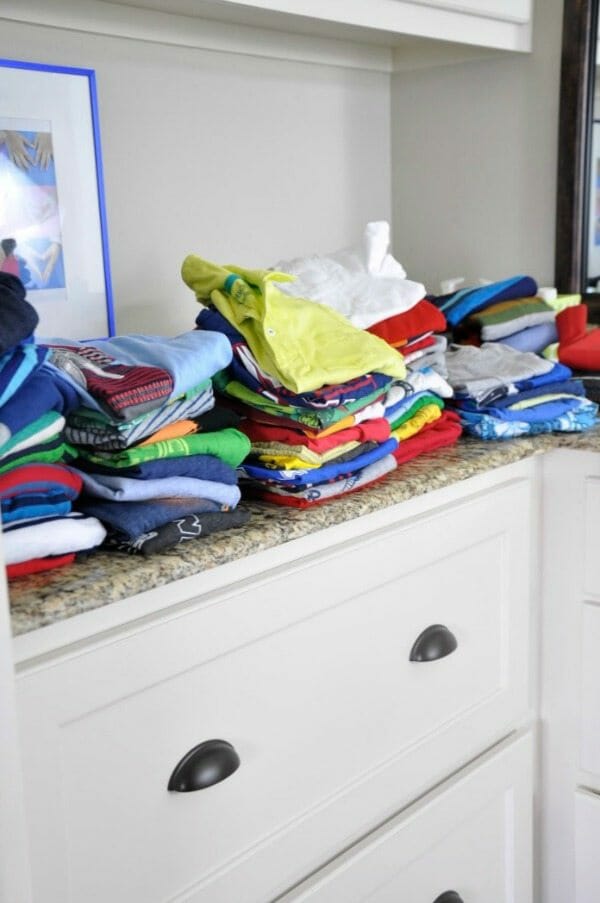 In the back row are sweaters and sweatshirts, then two piles of long sleeve tees with a few tank tops on top.  The front row is all tee-shirts. 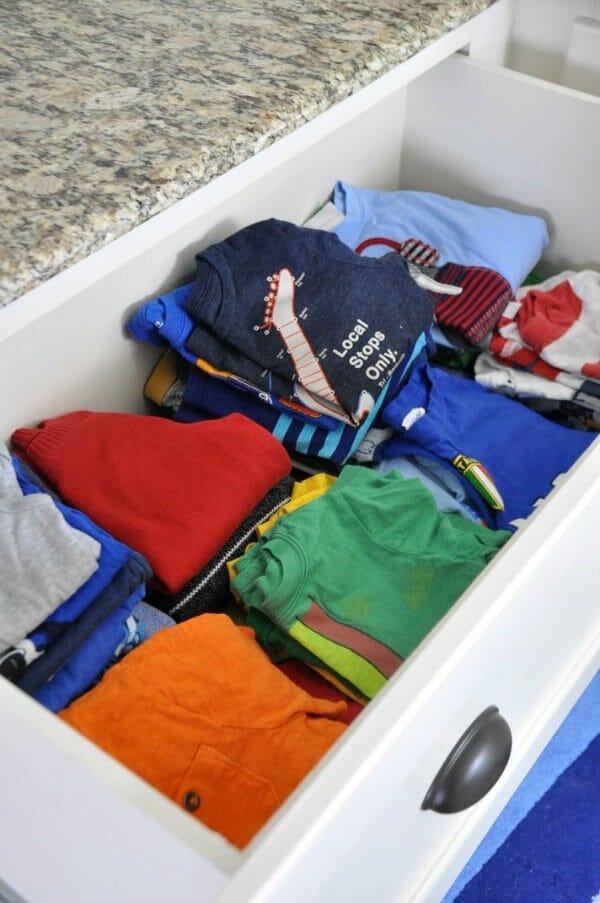 He’s good on jeans since I recently bought him new ones, but I bet he’s outgrown most of his shorts.  I made a pile that I plan to get him to try on before bath time since I couldn’t really tell by looking if they fit. But, since most are from Old Navy or Target, I’ll just have him try on one sample pair to see if all those in that brand fit.  Saves time and a kid’s patience. 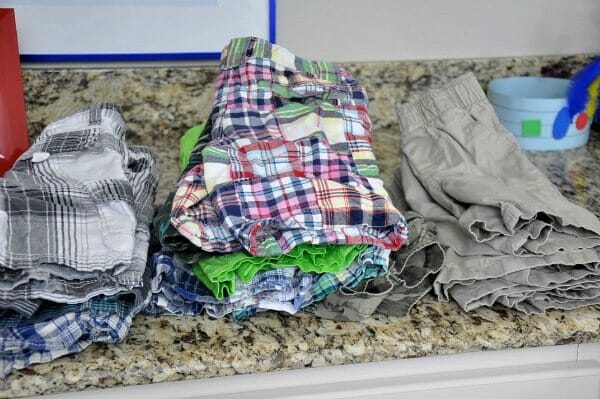 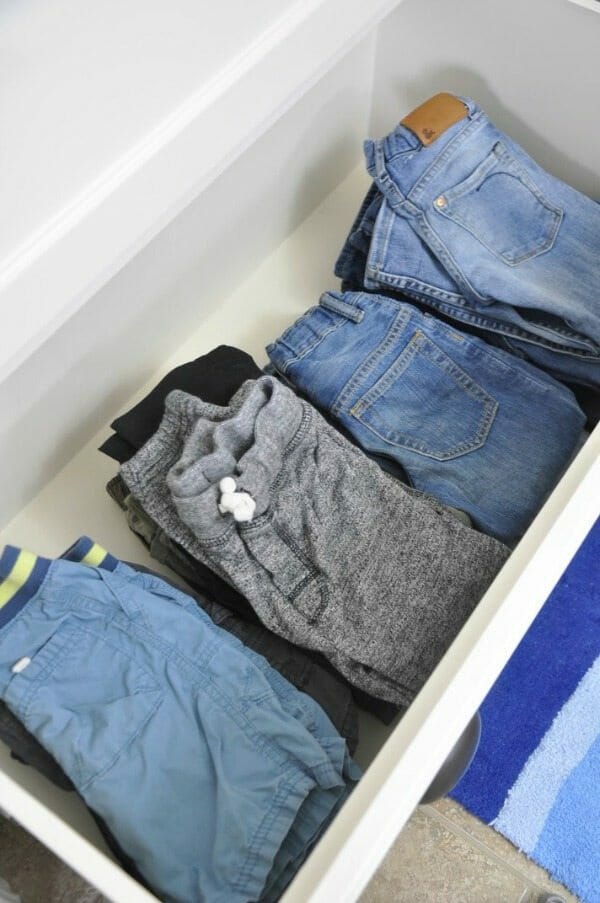 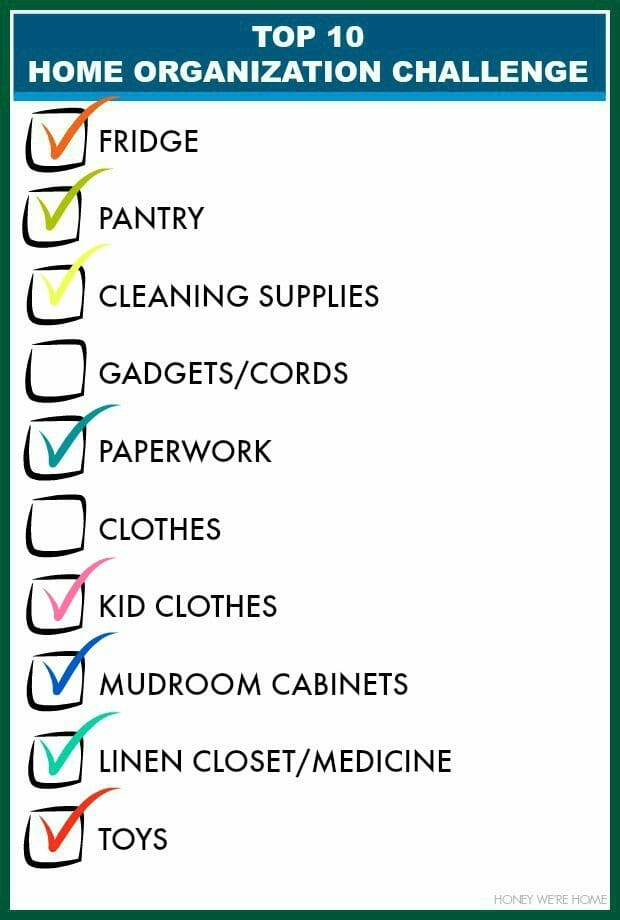