It’s been 4 weeks since I got my eyebrows microbladed and today I’m sharing all about the process with lots of before and after photos and answering all of your questions – Does it hurt? How much did it cost? It is an actual tattoo? Where did you go? Does it look real? etc. 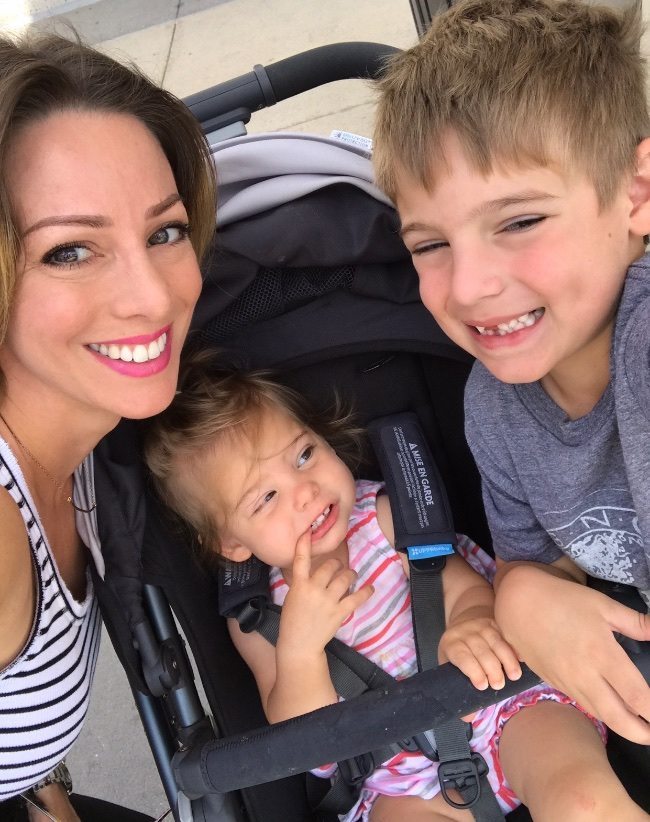 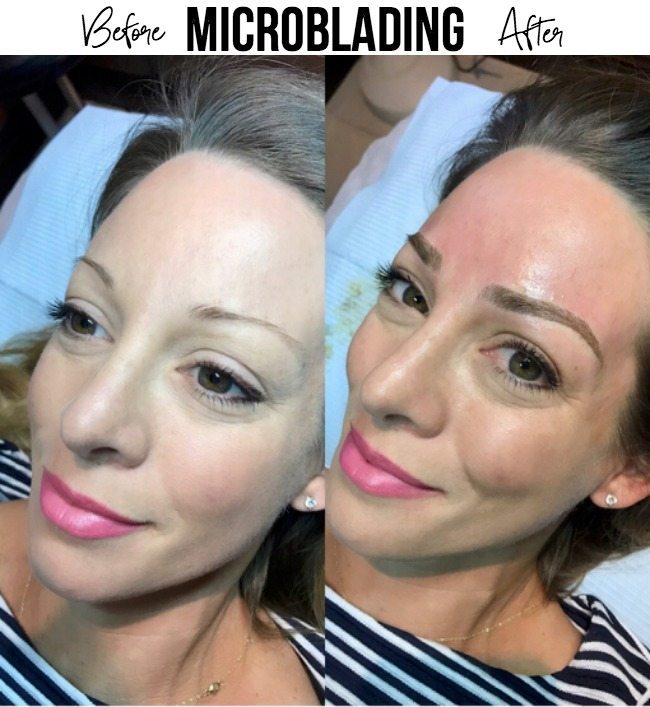 The morning of my appointment, I snapped a picture of my face with makeup on, but no brow makeup. As you can see, my little bitty brows are barely there! 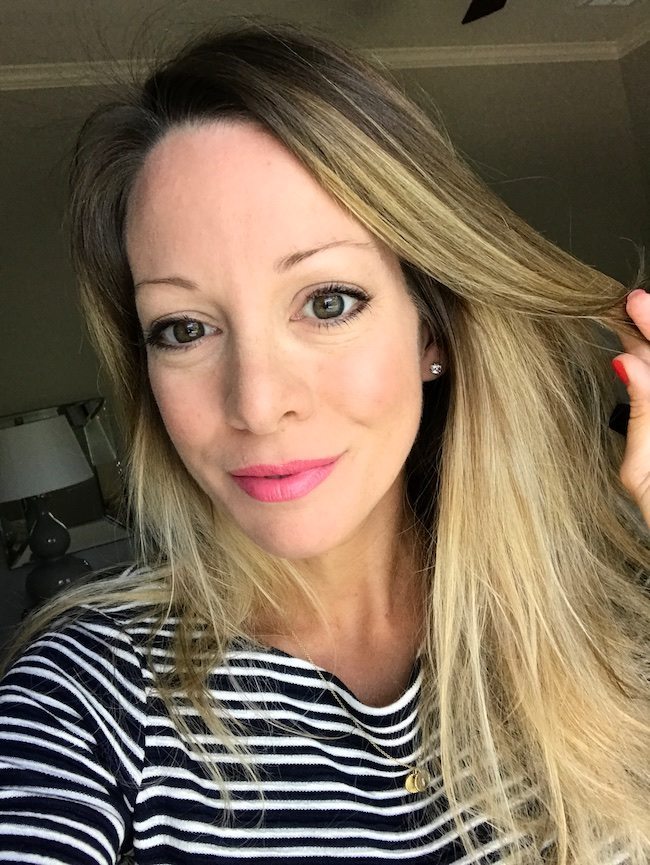 Before my microblading session, unless you were seeing me on Stories without makeup, you’re probably used to seeing my face all made up with makeup and my brows filled in with brow pencil (‘Fling’) and dipbrow (using this angled brush).  And always with the bold mascara.  #iheartmascara
But, I had to draw those eyebrows on everyday. ? And since I don’t wear makeup every single day — except mascara.  See above.  Always mascara! — the days I didn’t ‘put my brows on’ I felt particularly naked. 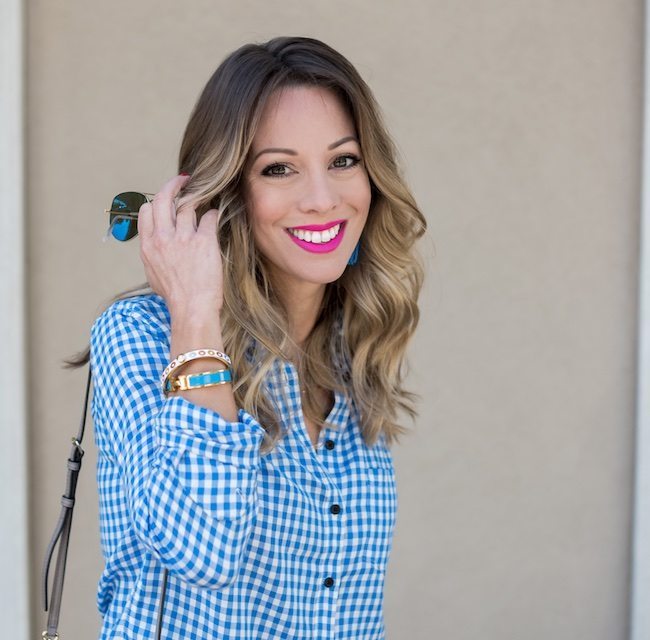 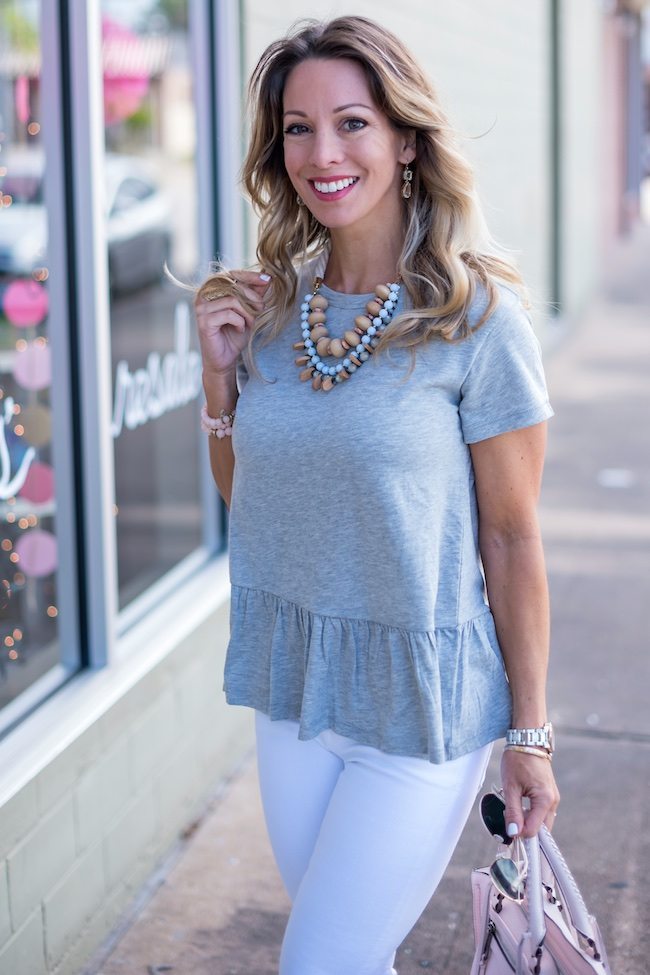 Microblading is a semi-permanent brow tattoo where the artist uses a handheld tool (regular tattooing is done with a machine) with tiny needles to draw fine hairlike strokes to mimic the look of real brow hairs.  The tool puts semi-permanent pigment into the skin, but doesn’t go as deep as a normal tattoo would.
I only heard about the procedure about a year ago.  Before that, I figured I was just stuck with my no-brows.  I didn’t even know there was hope for my brows!  But, once I learned about microblading, I was skeptical and didn’t know where to go or if I could trust someone to do my brows in the shape that I liked them.  I kept researching and watching videos, but it wasn’t until my friend Sara went and got hers done locally #youfirst! that I knew I wanted to go for it! Sara has a whole video of the procedure, so definitely check that out!
We both went to Lihn at Venetian Nail Spa in The Woodlands.

The day of the procedure I was nervous, but also really excited.  My mom and baby came with me, but they went out to lunch during the actual procedure, which took a total of about 2 hours. 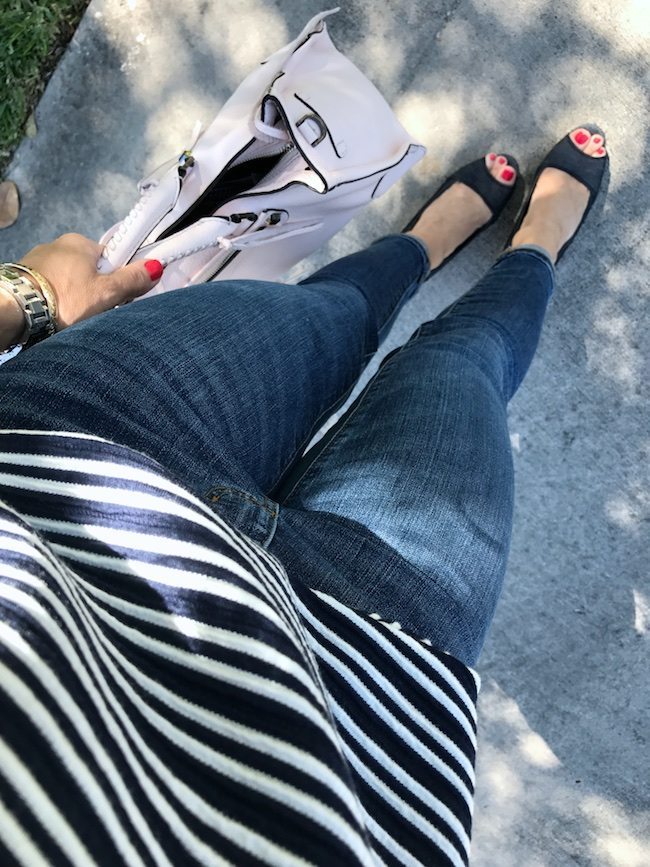 When I met with Lihn, the microblade artist, we first talked about my brows and I showed her pictures on my phone of how I normally filled mine in.  I told her I didn’t want them too thick or heavy.  She measured my face with a special tool and used an app on her phone to determine the best shape of brows for my face based on my bone structure and symmetry. 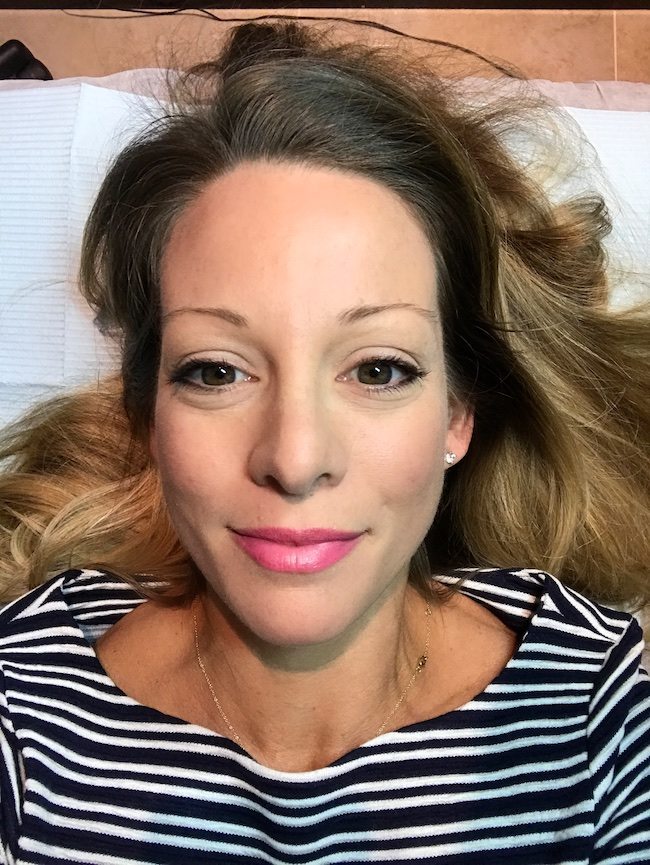 She said the inner brows should come all the way to your tear duct, which is way closer together than I’m used to because I had zero hairs there.  She measures with the tool, but draws on your face with a pencil and it’s painless. 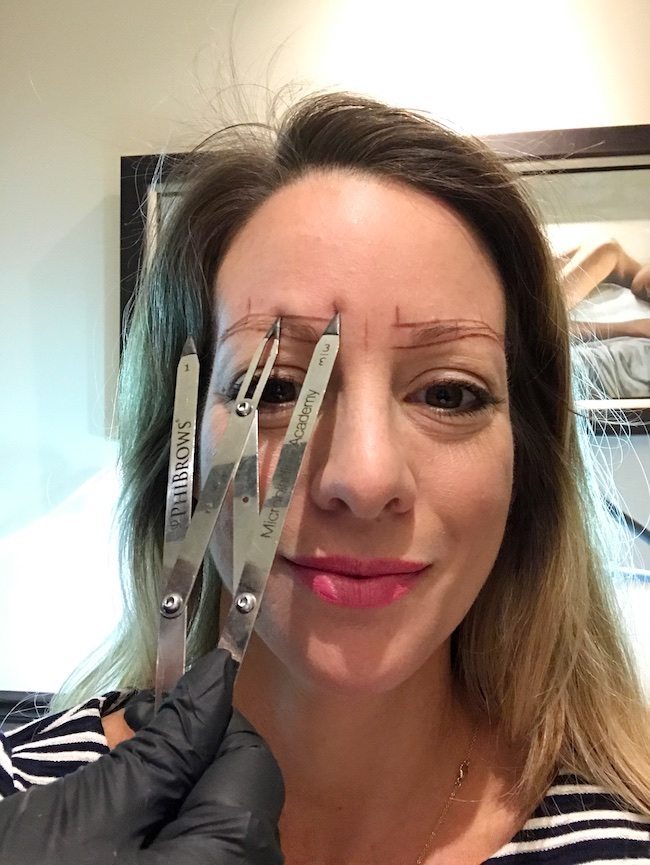 After she was done drawing, she showed me that she planned to fill in the inside of the lines.  In retrospect, I would recommend you go for a consultation and have the artist draw the brows completely on with pencil first so you can see what they will look like when she’s finished with the microblading.  This photo below only shows the outline, so I think it would’ve been less shocking afterward if they would’ve been drawn on first. 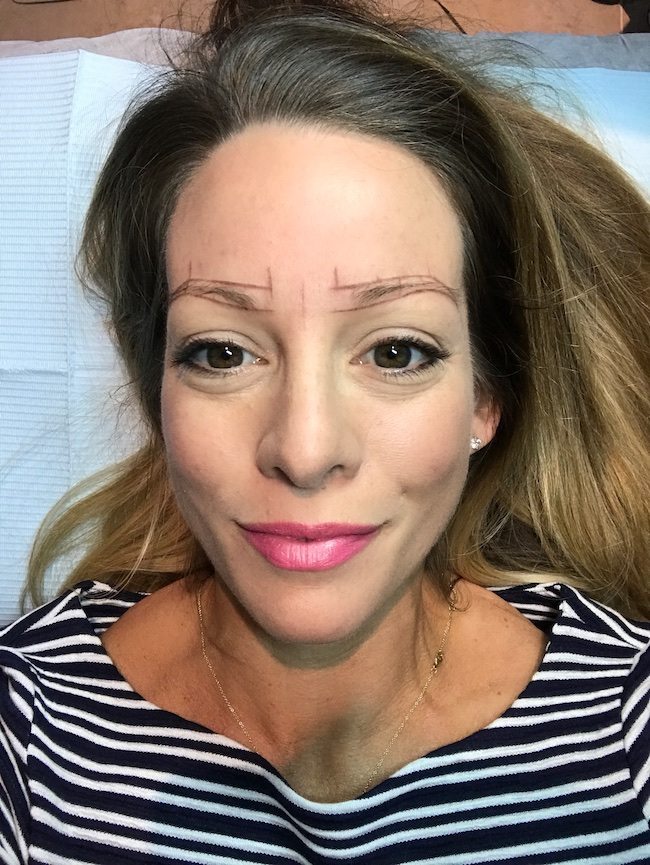 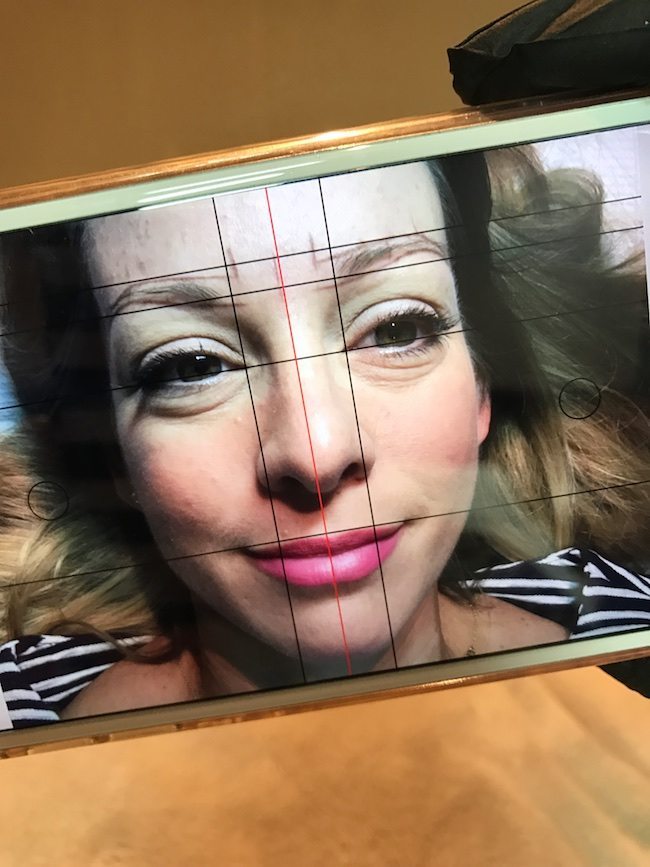 She mixed two pigment colors together to get my perfect shade and ended up rubbing a third color in at the end for kind of a highlight. 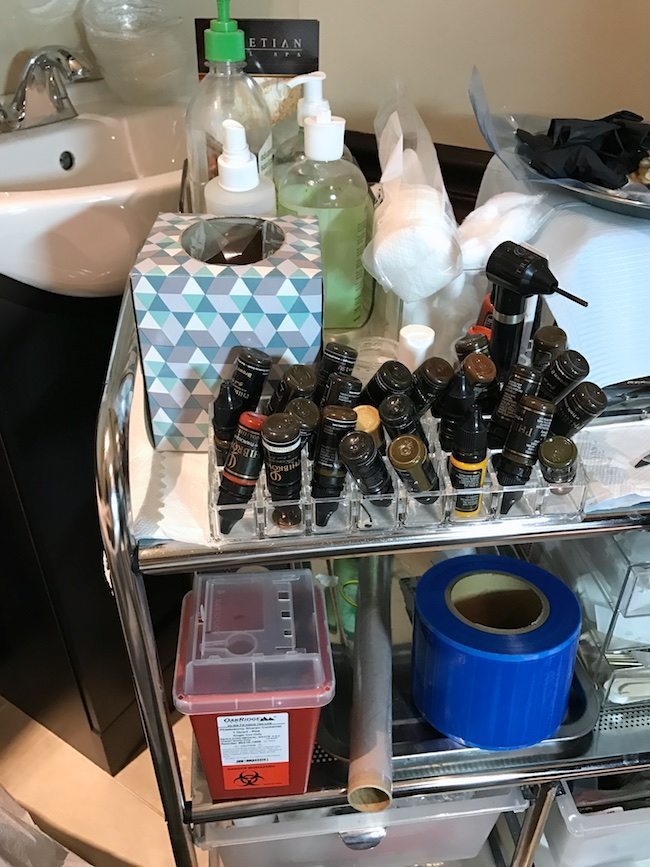 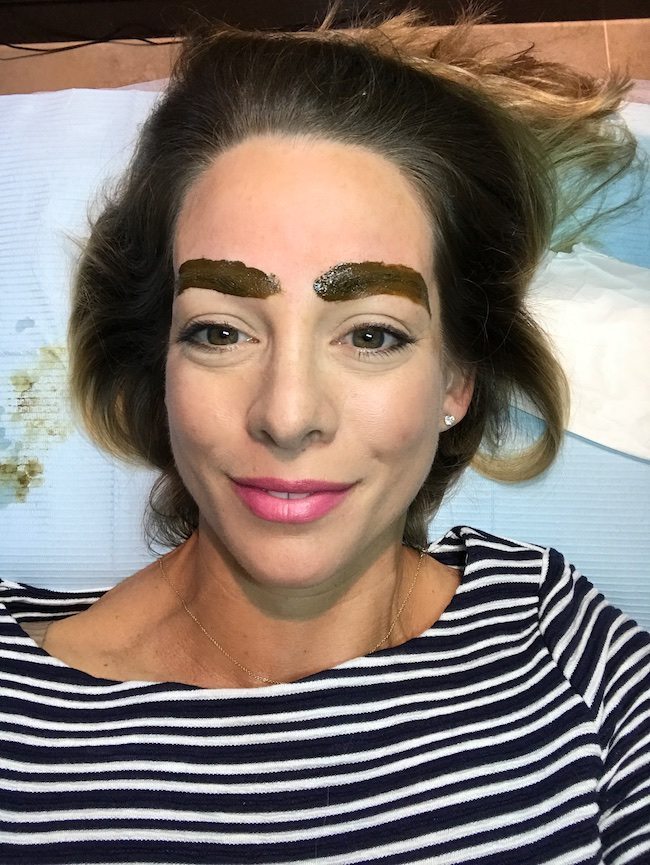 After the consultation and the brow measuring, Lihn started the microblading procedure where she makes tiny cuts onto the top layer of your skin with a tiny needle.  She did not numb my brows the first time around and the mild pain was tolerable, probably a 5 out of 10.  Sara described the feeling as a cat tongue scratching your brows and that’s pretty accurate. The sound is worse than the feeling though because it sounds like little scraping cuts on your skin, but they happen so quickly and one entire brow is done in about 10-15 minutes.
After Lihn had done both brows, she applied numbing cream and went over each brow again, filling in with more pigment.  I have to say, even though the pain was mild the first time, I would ask for numbing cream from the get-go next time.  It just makes the procedure more pleasant. After she was done microblading and rubbed in more pigment, and then cleaned them – it felt like with alcohol, but I’m not sure- the way she kept rubbing my brows made them feel a little sore but nothing unbearable.
The whole appointment took about 2 hours from the initial consultation, to the measuring/drawing, two passes over both brows, then after-care instructions (you’re supposed to apply ointment twice a day for about a week and there can be flaking and itchiness, but I didn’t really have that), followed by 10 minutes of me sitting in the chair stunned that I had eyebrows!
It’s the wildest feeling seeing brows on your face where you’re used to seeing none.  If you look closely at the third picture below, you can see where my brows are and then the “brow” hairs she microbladed onto my skin. 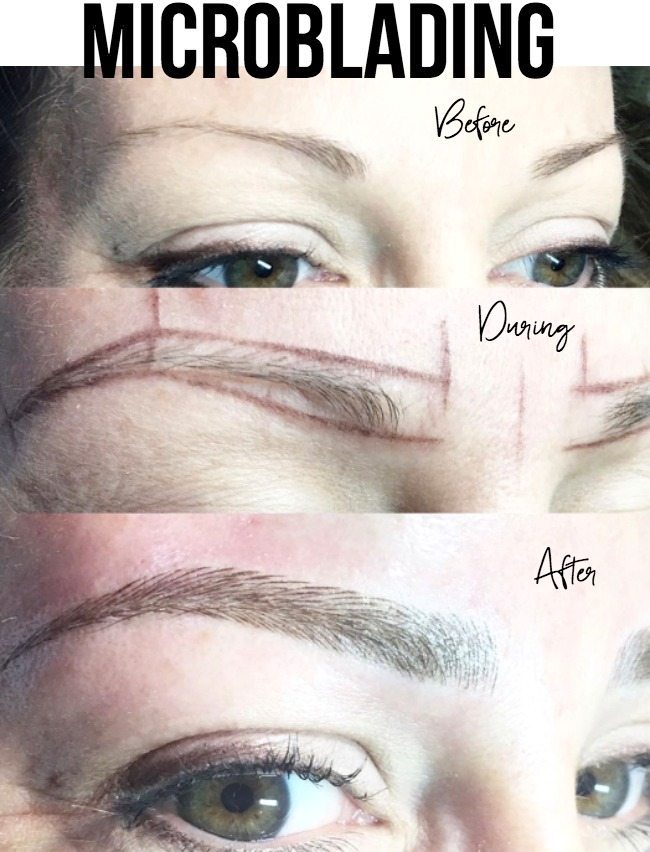 When I saw my brows for the first time, I was in total shock.  I immediately thought they looked too close together.  They also seemed so dark!  I was thinking, “holy shit, this is semipermanent, what have I done????!!!”  Lihn kept assuring me how good they looked and that they would fade a lot within 2 weeks and then I’d be back asking for them darker again. She says that happens with almost everyone.
For the first 2 days afterwards, whenever I caught a glimpse of myself in the mirror, I was stunned. My bigger, darker brows felt masculine to me. 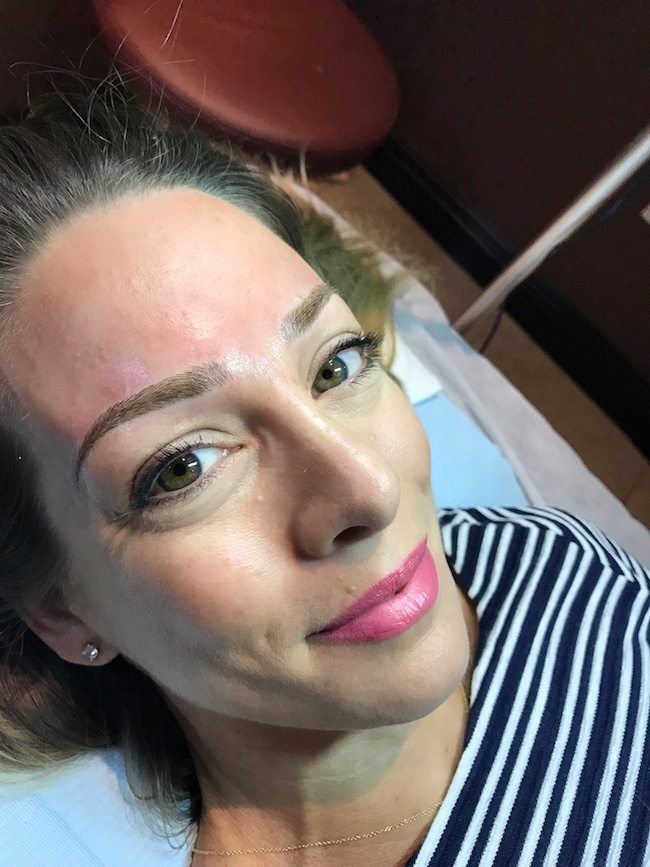 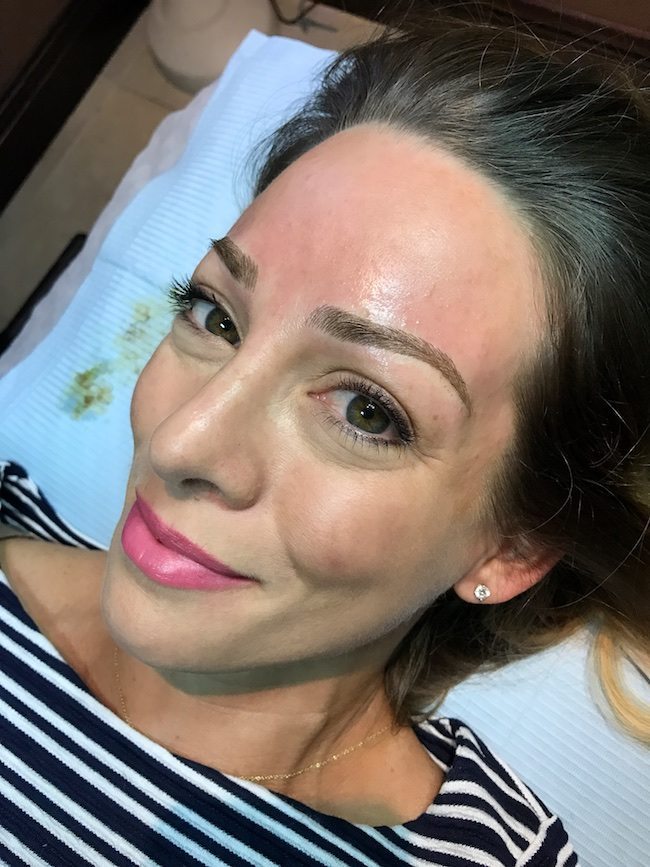 The picture below is from 2 days after my initial treatment.  No one seemed to really notice, but I was still feeling very self conscious at this point. 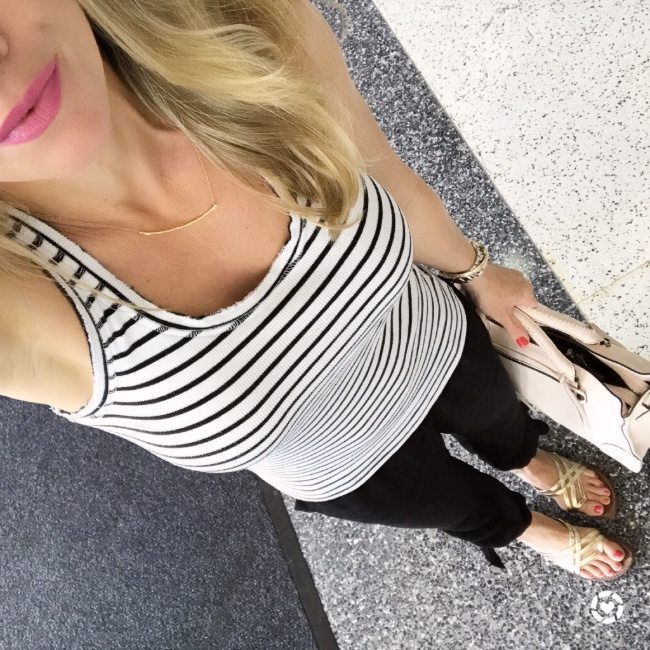 Tank XS under $20 | Ankle-Tie Pants XS  | Sandals | Bag | Lips – Talk to Me Matte with Gloss – Tickled Pink | Bracelet | Gold Bar Necklace | Pink Bag
But, after about one week, they already lightened up and I was really liking them!  I felt like the fuller brows actually looked more youthful, which was something I hadn’t anticipated.

The microblading fades approximately 30-50% during the first week, so that’s why a touch-up is needed.  I’ve heard after you go the first time, and 6 weeks later, it can last up to about 18 months. 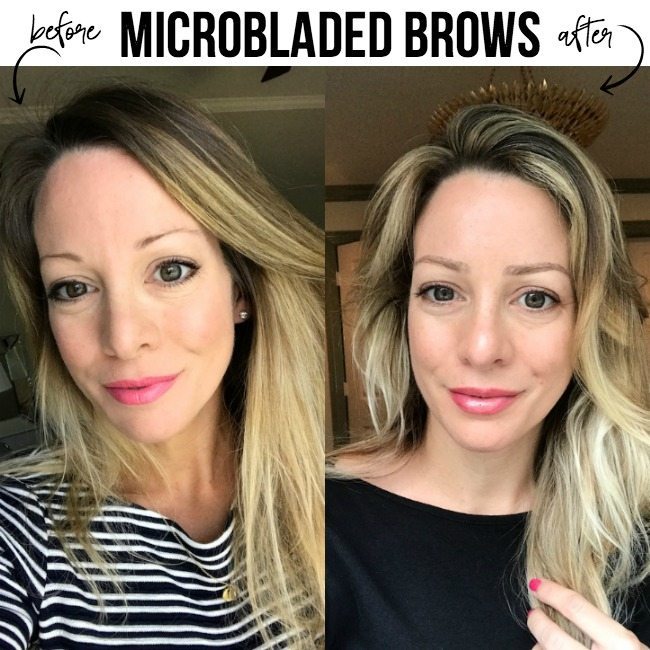 Now that I’ve had my brows for one month, I actually really do like them!  I snapped this iPhone pic yesterday without makeup (just a smidge of mascara) so you could see what the brows look like untouched.  You can see that they have faded significantly and I already made my 6-week touch-up appointment. 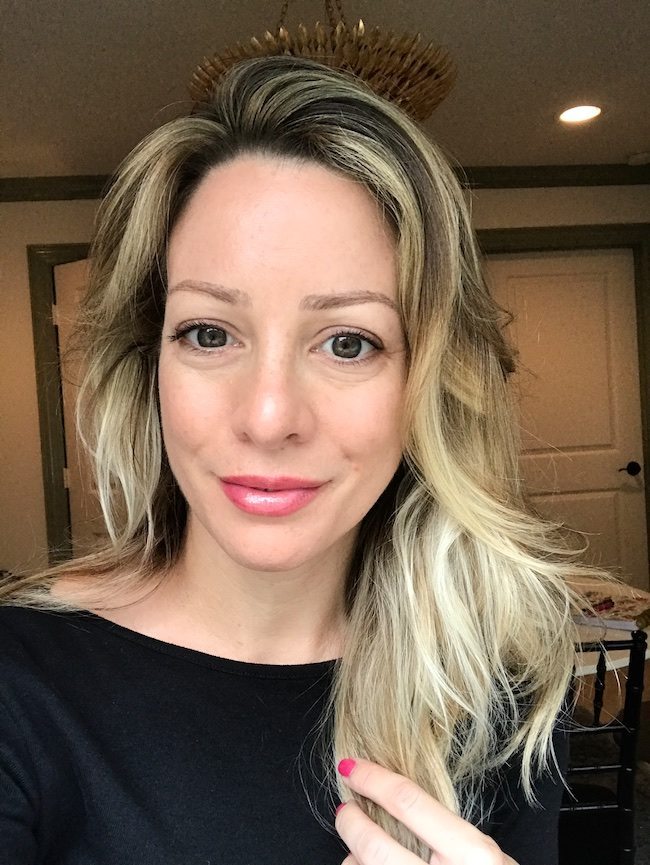 The part in the middle closest to my nose where I had no real hairs to start with have faded the most, but the strokes still look like real hair.  You want to really make sure that your microblade artist draws the hair strokes in a slightly slanted way that mimics the way real hair grows, but not curled or straight- unless that’s how your real brows grow.
Even though I’m very happy with how my brows turned out, I would recommend doing lots of research, asking friends or even strangers if you’re out and see someone whose brows you admire for recommendations, going to several consultations first before booking your appointment.  I’ve seen lots of bad microbladed brows online – just search #microblade on IG and you’ll see! 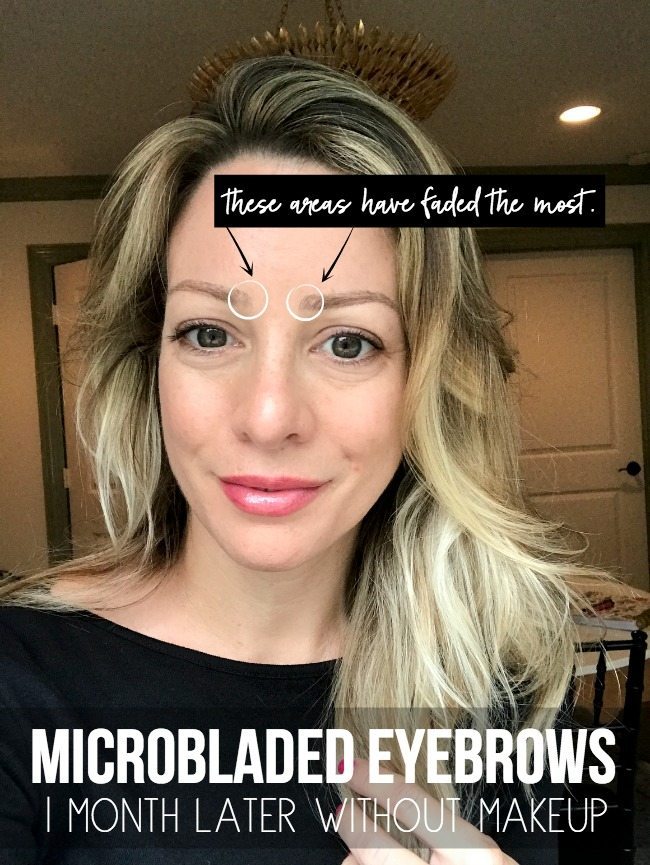 When I’m doing a photo shoot, I do still fill my brows in, but with the microblading, I already have a good base, so I don’t have to do to much. 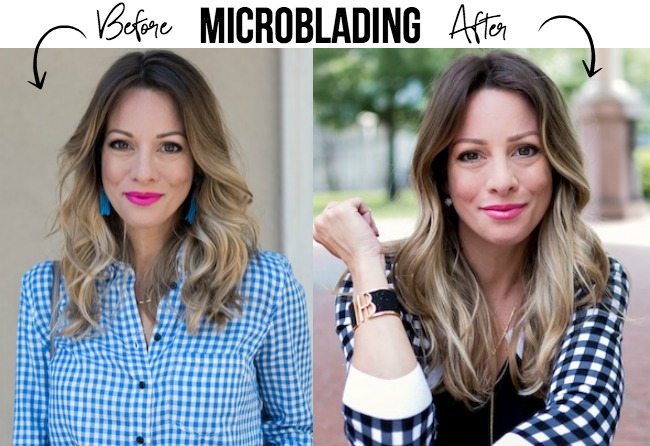 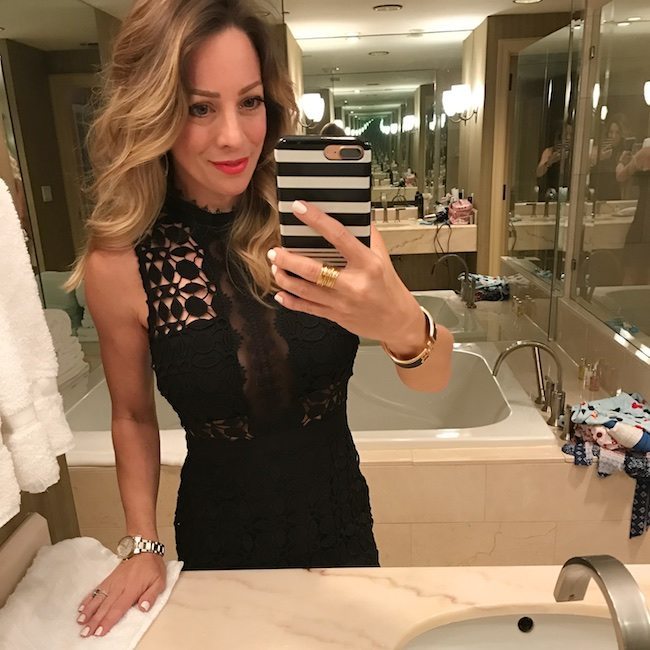 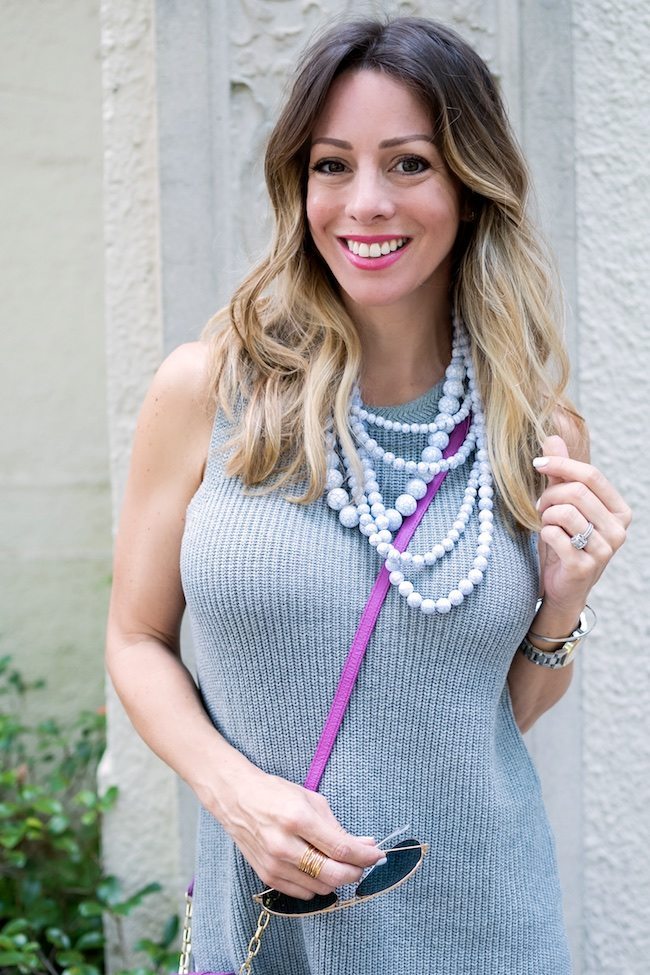 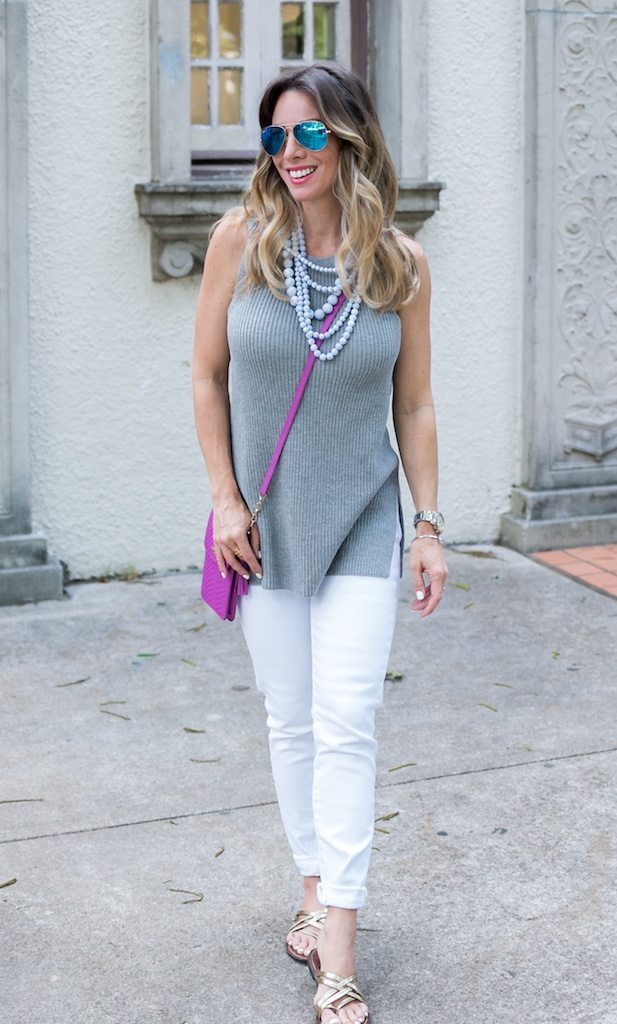 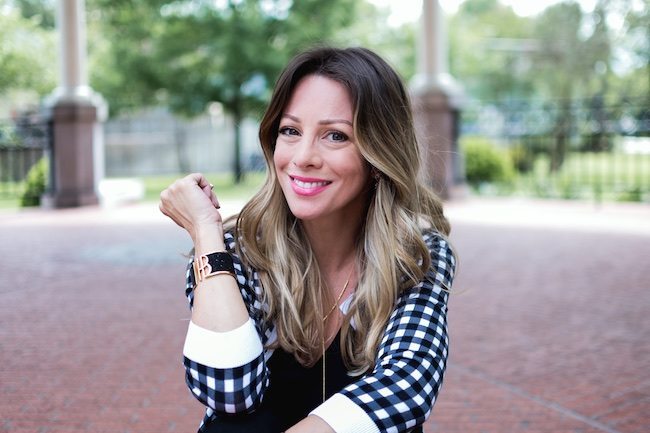 Gingham Cardi | Black Tank | Adjustable Necklace
I’m a convert now and looking forward to my touch-up appointment.  It’s so nice to wake up in the morning and have eyebrows already on my face!  I think it’s gonna be even better this summer when I go to the pool!  What do you think?  Do you have any questions I didn’t answer?