Thank you so much for all the kind sentiments recently on our new baby girl. Y’all love a new baby just as much as I do!  We announced her birth and name, but today, it’s all about the first little baby to steal my heart almost six years ago, her big brother James.  His birthday and her due date were just 3 days apart, so we thought we’d be smart and celebrate his birthday the weekend before.  Little did we know she’d come early enough to celebrate it together!  At the end of this post is our very first “family of four” photo.
James is obsessed with all things Star Wars, so of course he wanted a Star Wars party, complete with homemade lightsabers to give to all of his friends as a party gift.  We started with this customizable invite from Etsy.  You wouldn’t believe, but one of our sweet friends actually made the Jedi robe he’s wearing just because she knew how crazy he is over Star Wars.  But the coolest thing is that when she gave it to him, it included a special letter from Yoda addressed specifically to Jedi James with advice on being a Jedi.  It’s one of his prized possessions and he treasures it! 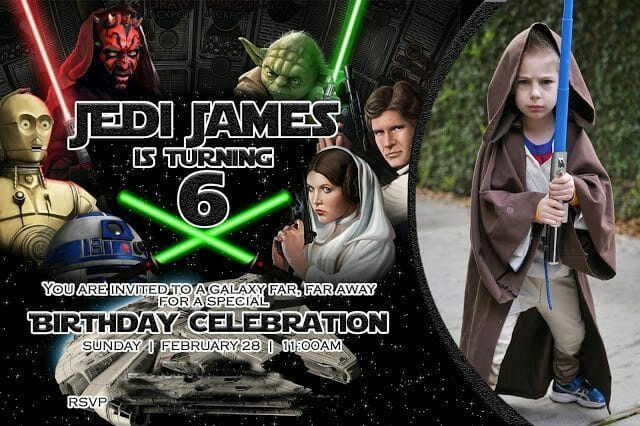 Etsy Star Wars invitation
The lightsabers were an easy, albeit time consuming, DIY project that James started on himself.  We bought pool noodles, cut them in half, then decorated them with duct tape.  At first, James was set on making each light saber authentic, just like each character’s lightsaber would actually look.  But, that was taking forever and cutting duct tape is really hard!  You need sharp scissors and a steady hand to get a clean cut. 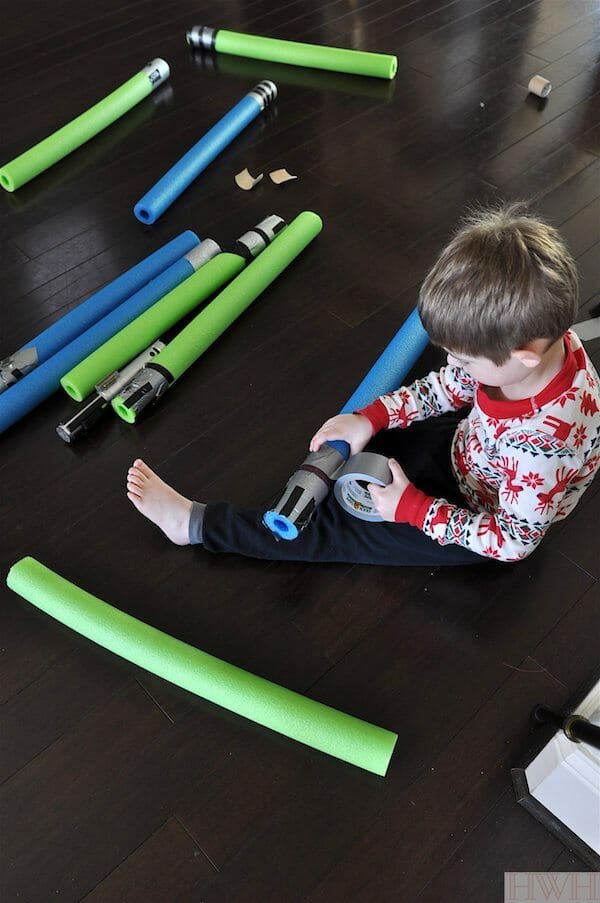 So we called in reinforcements.  I seriously think he was cursing me in his head as he helped make the remaining 30 lightsabers. #thanksbabe! 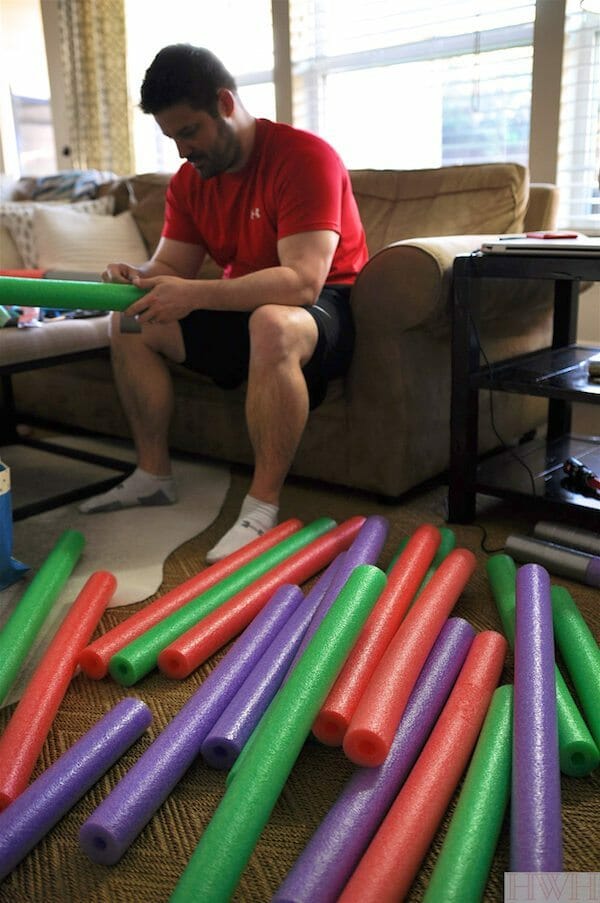 I think we made about 40 lightsabers total and then I attached the May the Force Be With You tags with curling ribbon. 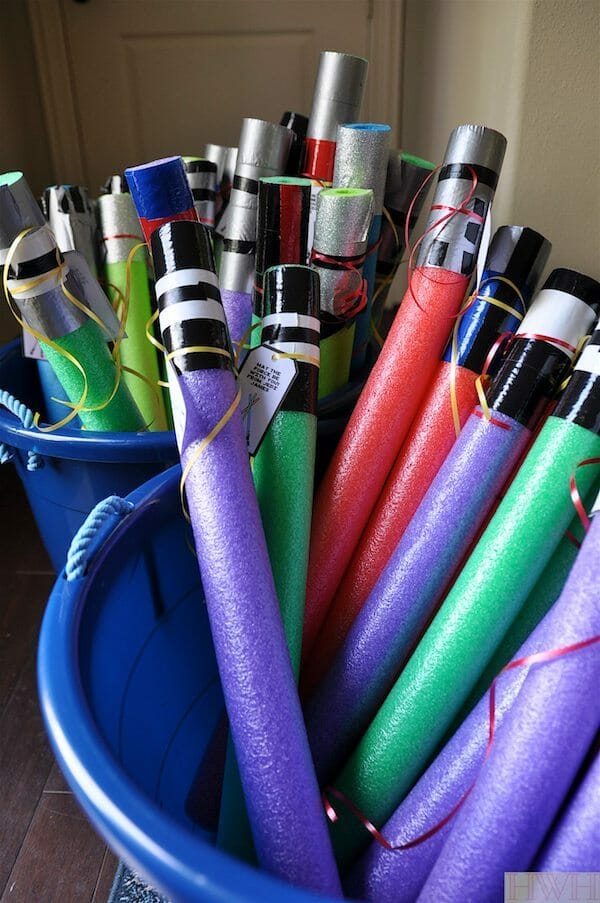 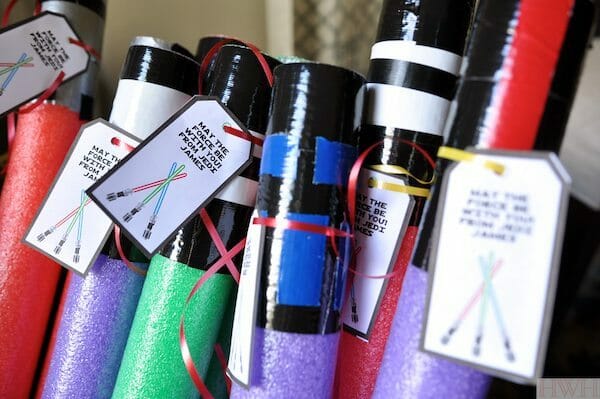 May the Force Be With You tags 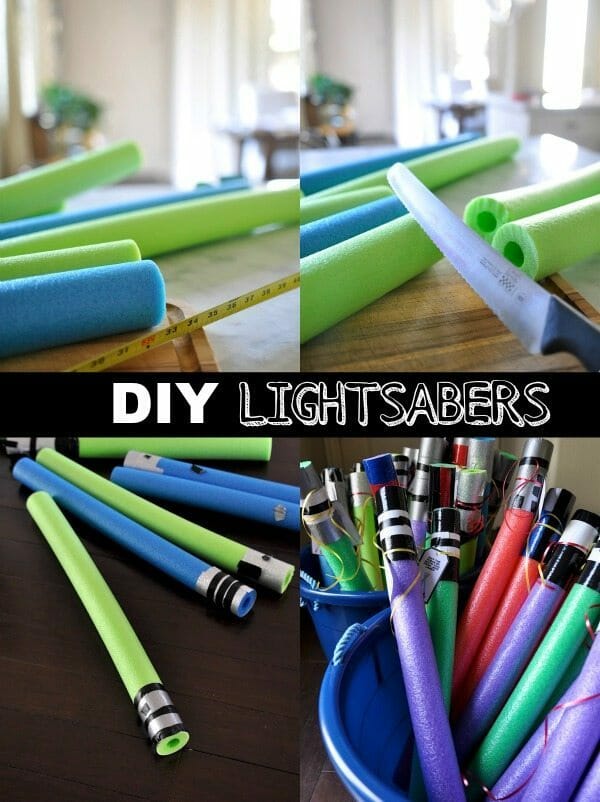 These lightsabers were a huge hit at the party, but I warn you, make sure to hand them out as the little guests are leaving the party!  Our eager guests grabbed many ahead of time and it was lightsaber battle crazy for a bit.  The kids loved it, but I thought it was too chaotic and I didn’t want anyone to get hurt. Some of those kids are strong!
As for the cake, a simple grocery store Darth Vader sheet cake was delicious and James picked it out. The Darth Vader figure is battery operated to make the heavy-breathing sound Darth is famous for.  It fed 48 and we barely had any left. 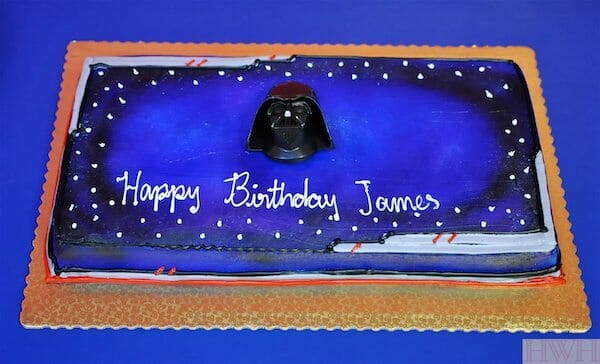 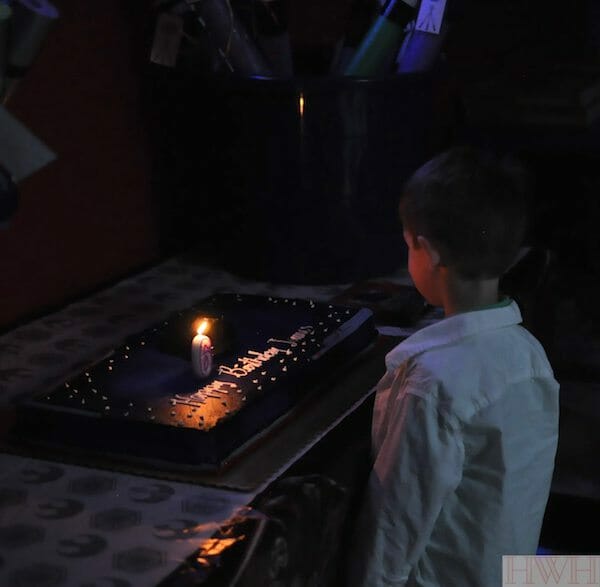 And here’s that party-of-4 shot I was telling you about.  The lighting at the party place is terrible, but it’s still a cute pic. 🙂  I probably wouldn’t have wanted to leave the house with such a newborn baby, but I didn’t want to miss our son’s birthday party (and a couple other events for him this weekend), so I bundled her up and brought her along.  Did you have to do that with your second too? 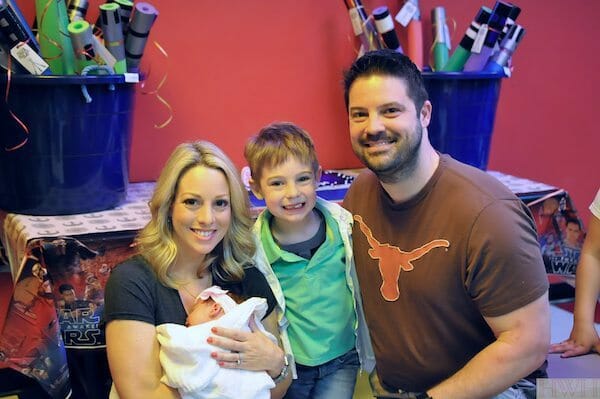 She did great and slept the whole time.  People are smart enough to know that newborn babies are fragile things, so we just kept her covered up and no one touched her.  I actually ended up feeding her in the car before the party and taking her back to the car a little early, just to give us a break.  It was actually really nice to visit with our friends and get to share our birth experience and be around people who love and support us so much.

Thank you note TIP:  When we got back home to open gifts, instead of just writing on a piece of paper the name of the gift giver and their gift for thank-you notes later, I wrote out the cards as James opened the gifts. Now, all he has to do is sign the cards, and I can drop them in the mail!  I did have to write fast to keep up with the opening of the presents and tell him to slow down a few times, but this worked so much better than having to write out all the cards later.  Mama barely has time for a shower, so I wanted to make sure the thank-you’s weren’t put on the back burner.
Also, I mentioned we had a couple other events for James this weekend that we brought Jordan to, and tomorrow I’ll share the things that made the outings much easier for us!
__________________
keep in touch!
subscribe  | instagram | pinterest | facebook | twitter | bloglovin