Hi friends! How was your weekend?!  As usual, ours flew by too fast and now we’re staring down the last week of summer break!  To celebrate, we’ve got some fun things planned this week, starting with a trip to the zoo this morning. There’s a brand new baby elephant named “Joy” that was just born last month!  I don’t think we’ve ever taken Jordan to the zoo, so I can’t wait to see how she enjoys it.

I think we’ll also go feed the horses, since that’s something James said he wants to do again.  In Houston, it’s at the Mounted Patrol Facility and you can bring apples, carrots and peppermint candy and feed the horses.  It’s a fun little afternoon outing.

If you’re in Houston, you can check out this Things to Do With Kids that I wrote last summer, full of fun things for you to do with the kiddos!

With the super lazy summer we had this year, all the routine and schedules I had thoughtfully implemented last year have flown out the window!  We’ve been staying up too late, sleeping in and (James) barely getting dressed half the time!

But, I know that’s what summer is for-  I just hope it’s not too painful getting back into the swing of things next week! Since kindergarten, I had things in ship shape with James getting himself ready for school without (much) prompting from the parents, but I know he’s gonna need a refresher.

I’ve updated his Morning Routine chart and his Chore chart because that’s what works best for his brain.  And if it’s written down and in plain sight, he knows what’s expected of him without the oh so pleasurable nagging.

I made him two charts in Pages on my mac, then simply printed them out and laminated them.  One chart is the Morning Routine, the second is the Household Chores.

He’s already had all these chores with the exception of setting and clearing the table, that we’ll start implementing now. I’ve been making him sweep the crumbs off the floor under his counter stool because he makes such a mess there that he should have to clean up.  He usually eats raisin toast for breakfast and somehow, half of it seems to end up on the floor everyday.

After we get home from school, the first thing he has to do is empty his backpack and hang it back up.  That way, I can also look at any important notes and review his schoolwork with him. 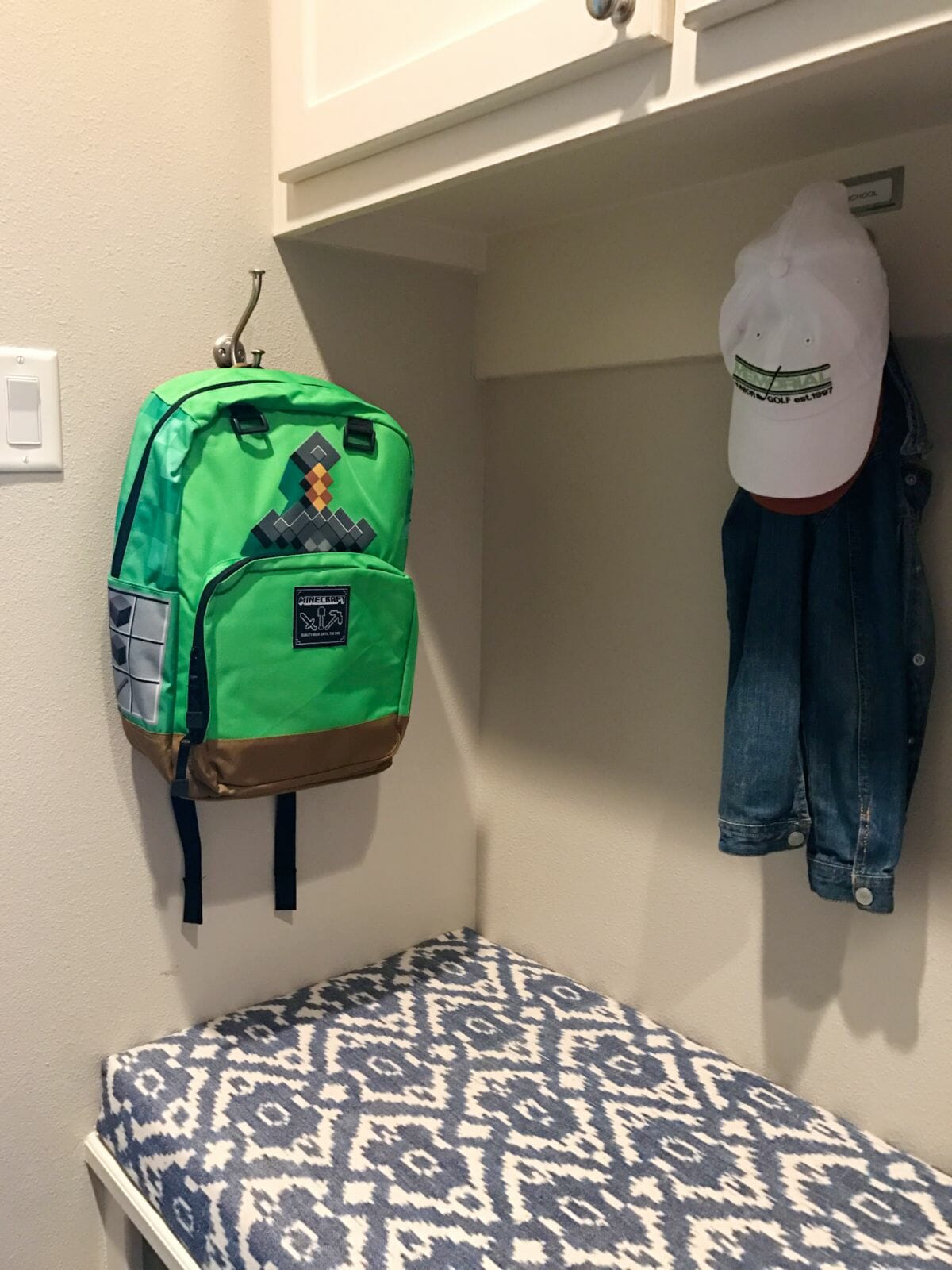 Then, he eats a snack and has downtime.  Homework time is usually while I’m making dinner and then the cleaning up is before bedtime.

We haven’t implemented an allowance yet, but I think that’s coming soon because we want to teach him the value of money with thoughtful spending, saving and giving.  I just need more time to consider how to do it before we start.  I welcome your suggestions about how you do allowance with your kids!

His Morning Routine is on the reverse side, so he can clearly see what needs to be done each day.  He should know by now, but this chart eliminates any excuses! 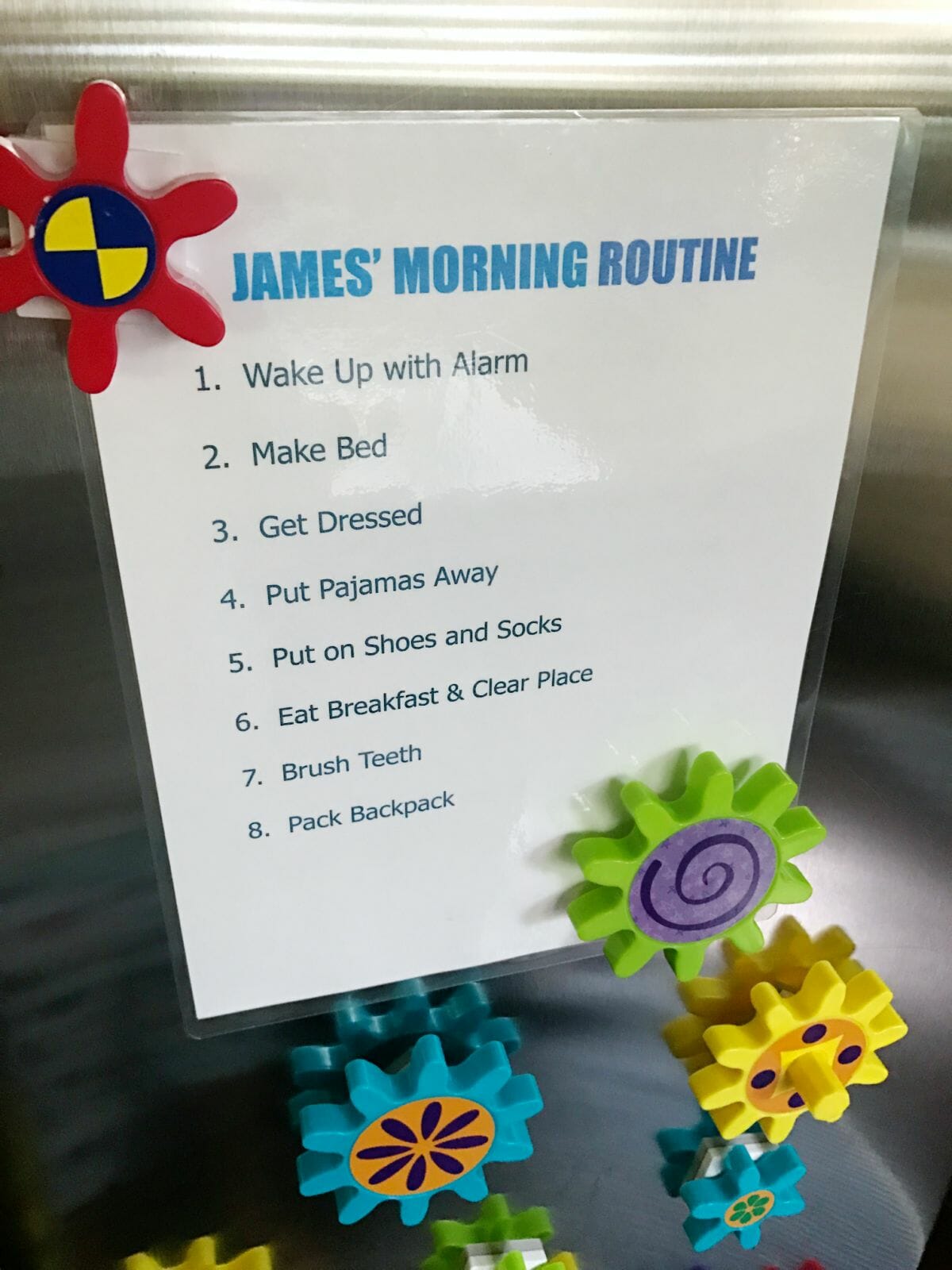 I know this sounds terrible, but this totally has me looking forward to school starting so I can clean out and organize our house again!  There’s so many things I want to get to that I haven’t been able to do with all the kids here!