If your house is anything like ours, mornings are hectic as we prepare for the day and try to get our son off to school on time.  Before our daughter was born, I wanted to make him responsible for getting himself ready for school in the mornings so I didn’t have to be all, “eat breakfast . . . get your shoes on . . . have you brushed your teeth yet? . . .  HURRY UP!!!!” everyday.  That hurry-up and yell routine stressed us both out and certainly wasn’t the best way to start the day.  I’m usually pretty patient with my son, but if there’s one area I find myself quick to lose my temper it’s when I’m trying to get us both out the door on time, in a hurry, and he’s dilly dallying around after I’ve told him 10 times to do something.

I knew we needed a new system to give him the tools to get himself ready for school and what we did has been working pretty well for us.  It’s not 100%, but I’d say he’s ready for school 4 out of 5 days on his own, without any prompting from us.  If not, the consequence is he doesn’t get to play on the iPad after school, a strong motivation for him.

Our son is in kindergarten, so he’s physically capable of getting himself ready in the morning, he just needed a structure to follow.  He’s the kind of kid who thrives with routine, predictable systems, and charts (wonder where he gets it?) so I knew if HE KNEW exactly what was expected of him each day, and he was given a timeline to complete each task, he could do it on his own. 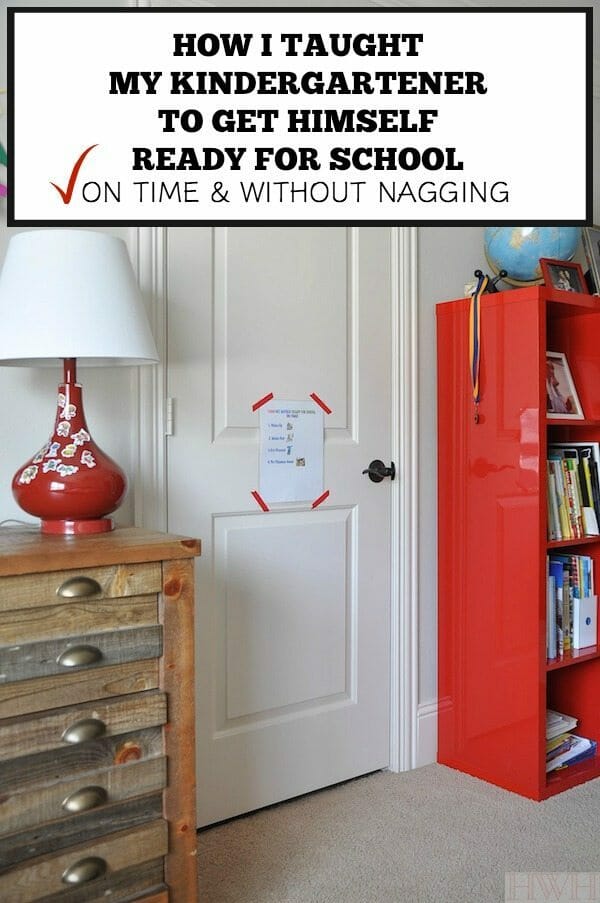 We started implementing this system at the end of Christmas break last year, before his baby sister was born.  I wanted to give him time to adjust to this change before the other life change occurred.  I sat him down a few days before school was about to start back up and explained that he was going to be in charge of getting himself ready in the morning and that I wasn’t going to tell him what to do at all. We discussed that he was a big boy and that he didn’t need me ordering him around in the mornings, he could get ready by himself, all on his own.  I think having him take ownership made him feel excited about the challenge and proud to be getting this ‘new’ level of independence.

Together (doing this whole thing together is key because it encourages the independence), we talked about everything that needed to happen in order to be ready for school in the morning and made a list:

Wake up
Make bed (I showed him how to make the bed, but I don’t require perfection)
Get dressed (he lays out his clothes the night before)
Put pajamas away
Put shoes and socks on
Eat breakfast (I make it)
Brush teeth
Pack lunch and snack (it’s ready to go in the fridge, he just has to put it in his backpack)
Get backpack

Before we made this list, he never made his own bed in the morning and did not put his pajamas away.  I wanted him to start doing this chore, so I figured now was a good time to implement it. He’s also starting to learn how to fold clothes, so folding and putting his clean pajamas back in the dresser drawer is also appropriate.

Next, we made two lists, one for the things that happen upstairs, and a second chart for the downstairs chores.  I prepared them on my computer, but he helped, choosing the clip art and the color of the words. He also chose where to hang the paper so he could see it. I laminated both pages to keep them lasting longer. 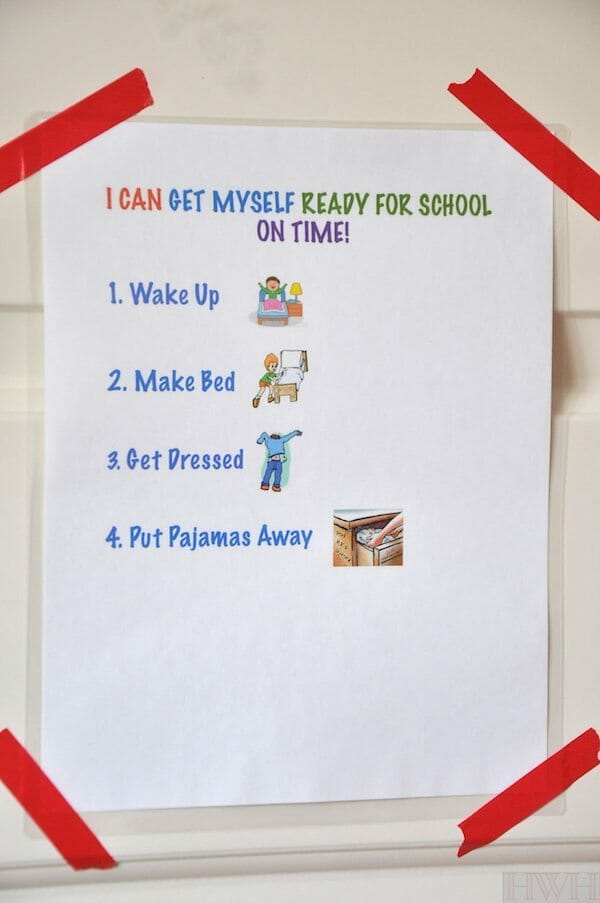 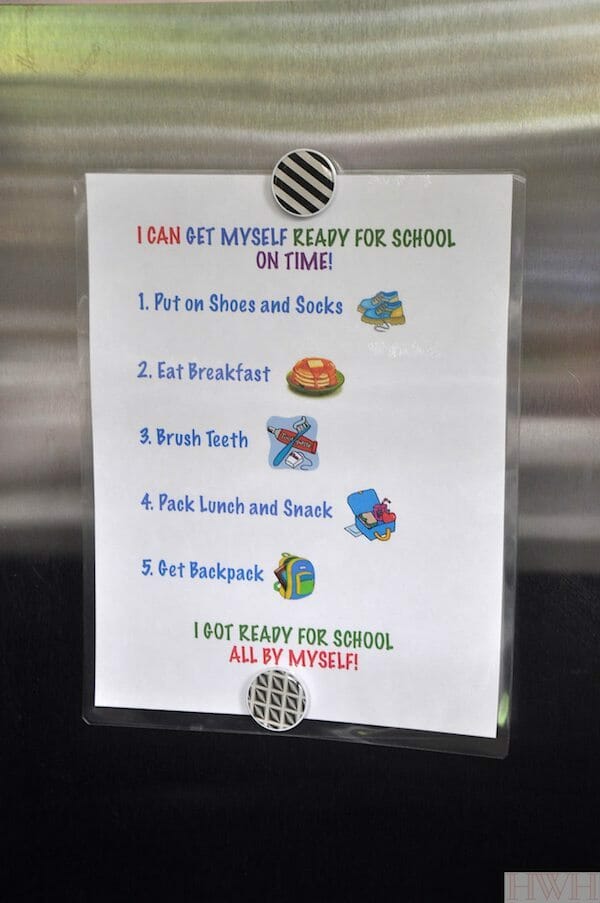 Spelling out each task for the morning and having it where he could easily see it was the first step, the second was setting timers so that he could complete everything on time.  Many kids tend to get distracted or don’t have a great sense of how long it takes to do something so we set a few alarms on my phone. And to make it fun, each alarm is set to play a song he likes and chose. 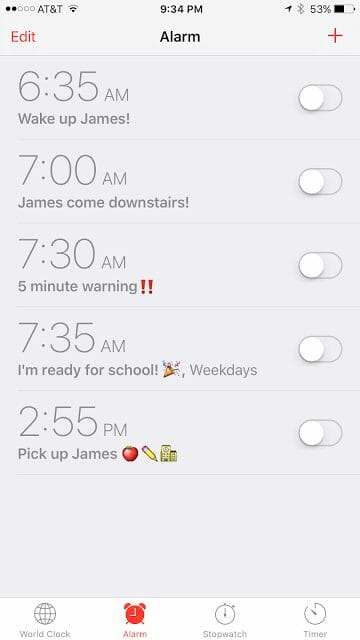 6:30 a.m.  I make sure I’m awake to go put my phone in his room.  Then I leave and go about getting myself ready, making his breakfast, etc.  (since our daughter has been born, my husband takes James to school though).

6:35 a.m.  The alarm goes off playing “Freedom” by Pitbull.  That ought to get you going in the morning! Then James is supposed to make his bed, put his pajamas away, get dressed and come downstairs.  (I originally had the wake up time at 6:45, but realized he needed an extra 10 minutes, so I moved the wakeup time back).

7:00 a.m.  Alarm goes off that signals he should be downstairs by now.  This was something I added after a couple weeks into the routine because sometimes he’d get distracted or maybe start playing or even crawl back in bed, whatever he was doing up there, but he needed to know it was time to be downstairs without me having to be the one to remind him.

When he gets downstairs, he still needs to eat breakfast, clear his place (had to add that), put his lunch/snack in his backpack, brush teeth, put on shoes and socks.  The whole time, he’s got the countdown on my phone so he can see how much time he’s got left. 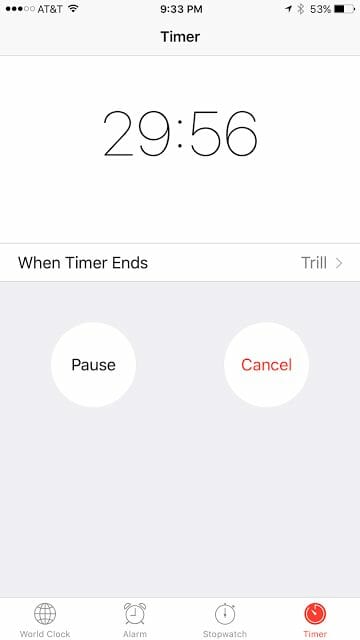 We actually can leave the house at 7:40 to make it to school on time, so if he’s not ready at 7:35 and I have to get onto him or help, we have that 5 minute cushion.  IF he gets everything ready with time to spare, he can play on his iPad before school.

Day 1 – he was up and at ’em without any prompting at all!  It was the first day back to school after the holiday break, so his momentum was high and he was eager to be responsible for himself.  He was ready a full 10 minutes early (that never happens!) and so, so excited and proud of himself!! Seeing how good it make him feel, made me feel great too.

Day 3 –  I find that Wednesdays are the hardest days to get our mornings going, and this one was no exception.  James was really tired and had a hard time getting up and did not get ready on time, but it was still better than before because I didn’t nag at all.  I just told him very calmly after he missed the deadline that he wouldn’t get to play on the iPad after school and he accepted it because he knew what to expect.

Since then, he’s done so super well and in retrospect, I bet we could’ve started this system at the beginning of the kindergarten school year.  He loves to watch the timer countdown to zero, and is always shouting out how much time he has left.  I had to explain when he’s eating breakfast with 30 minutes ’til we have to leave, that he’s got plenty of time and doesn’t have to scarf it down!  Now, he’s getting a better understanding of how long things take.

The best thing has been, I literally don’t tell him one thing to do in the morning (that’s the whole point!), even though I had to catch myself a few times when I wanted to “check” on him or make sure he’s getting ready.  I remind myself that we’re teaching him independence and part of that proud feeling he gets by being independent would be robbed if I didn’t keep up my end of the deal.  No nagging, Mom!