Month 13 had to be one of the most exciting months so far because James.Started.Walking!  I had imagined that Jimmy and I would teach James to walk by sitting across from each other in the living room beckoning James to “come to mama” but that didn’t happen.  He just started walking one day right after turning 13 months and within 2 weeks, he gave up crawling completely.
Here he is just last weekend as dad was doing the yardwork.  Ever tried to snap a pic of a walking baby??? And he doesn’t like to hold my hand while he’s walking.  He wants to do it on his own, thankyouverymuch! 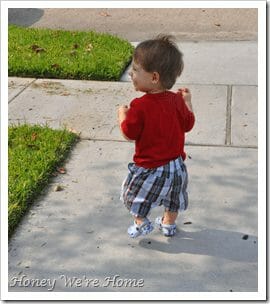 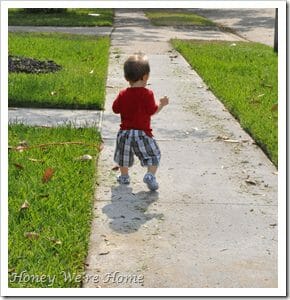 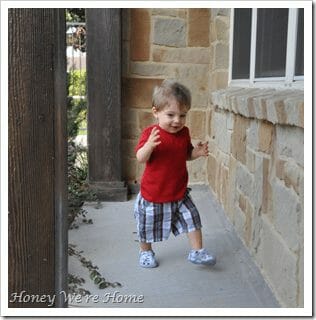 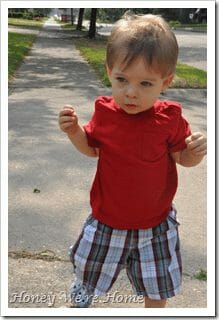 So cute how he walks with his arms by his side like that!
And he loved his first time at the beach. 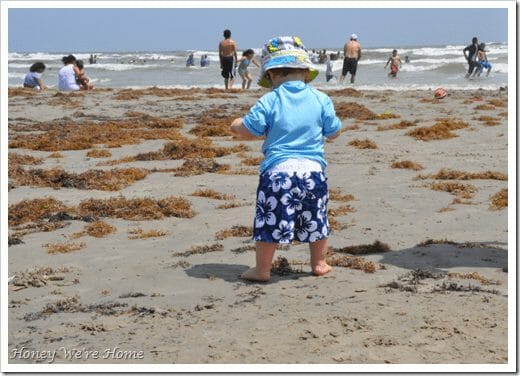 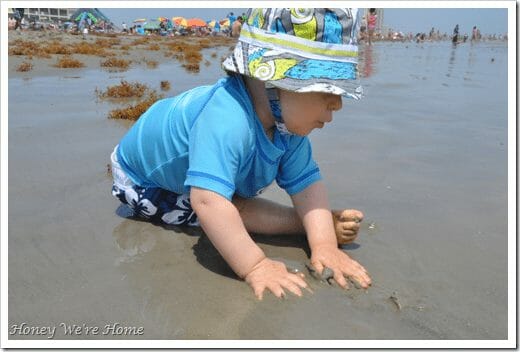 Getting to splash around in the water was so much fun for him.  Squeeeeals of laughter and delight! 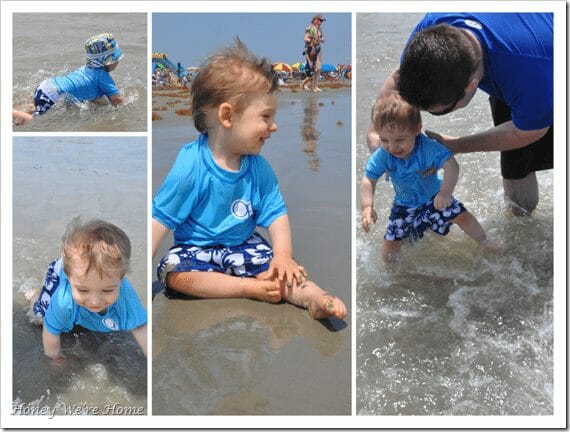 Our babysitter taught James how to drink from a straw and he’s obsessed!  He loves to say “Ah!” after a sip of a cold drink and then laugh at himself. 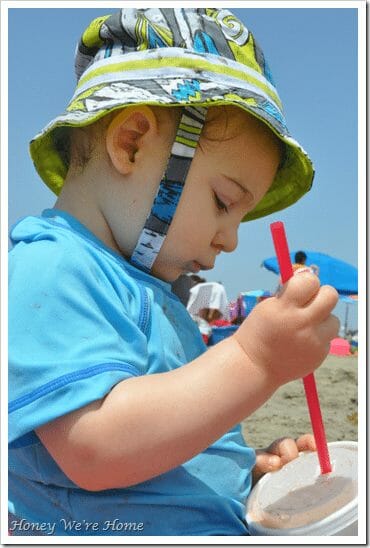 And we were finally able to turn the car seat around.  I kid that “King James the 4th” loves to get chauffeured around town. 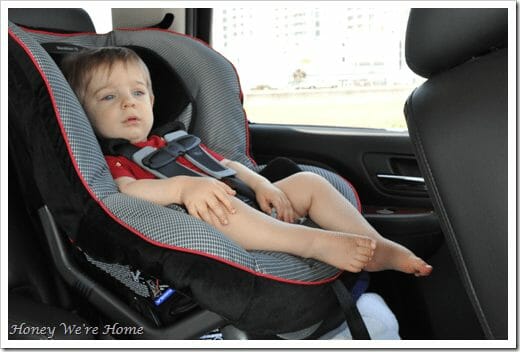 The trip to the zoo with the fam was so fun!  Love James’ The Beetles tee:)  But now that he can walk, he’s not so content to sit in the stroller. 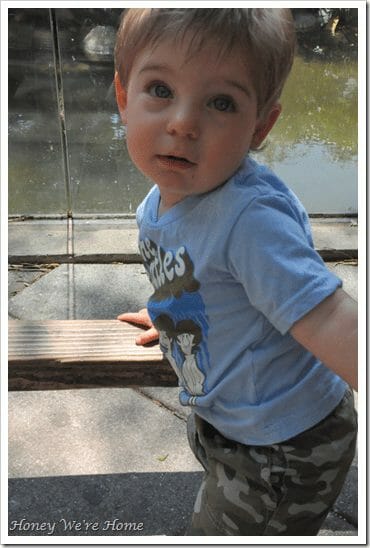 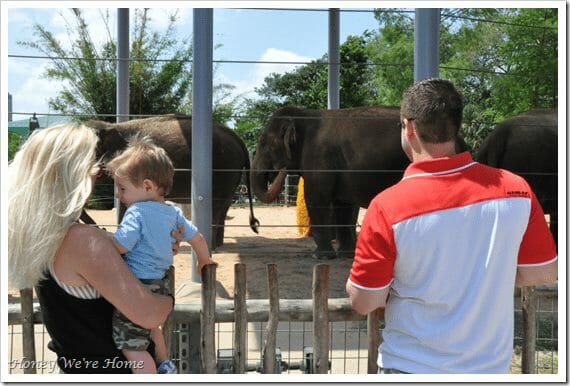 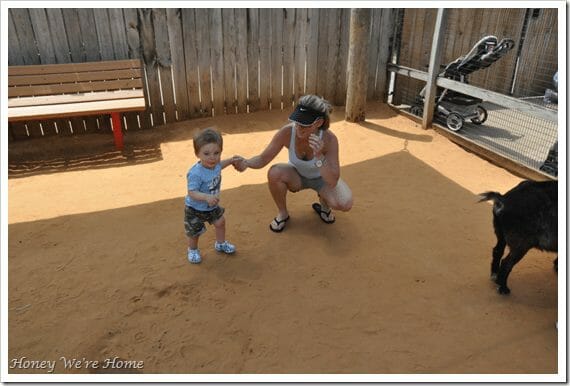 Ug, now he can climb up onto the couch by himself.  He just hikes one leg on top of the seat cushion and pulls himself up.  He’s always after those dang remotes! 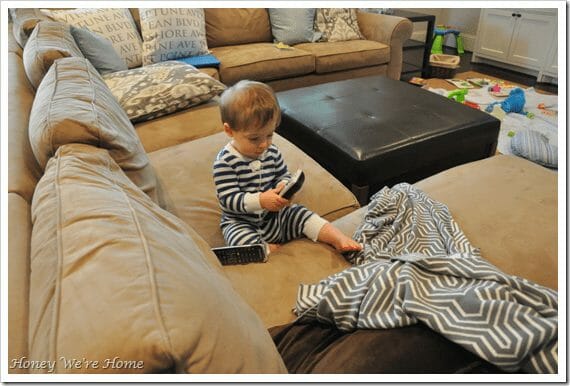 His basketball hoop is a new favorite toy.  Also, notice the ugly baby gate. (James was crawling halfway up the stairs so we needed it, but the good thing is that he learned to crawl down on his belly, feet first, so he can get off the couch or bed that way too).  I don’t know how he figured that out.  As for the gate, I’m petitioning for an iron gate that matches our staircase, but Jimmy was in favor of the $20 two-gates-rigged-together-option. 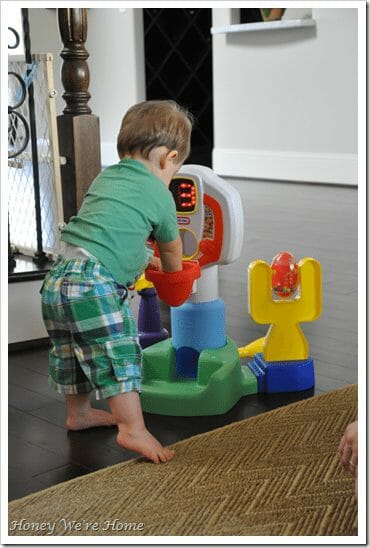 Enjoying some time in the little blow up pool with the cuz! 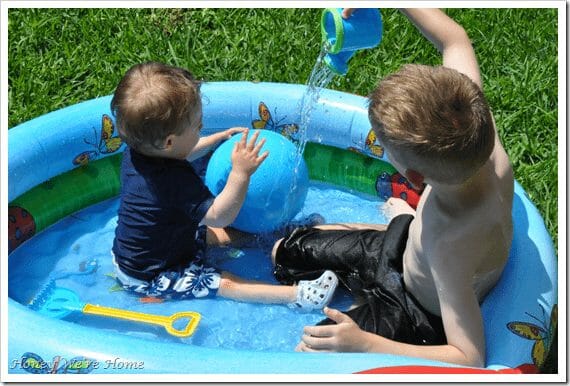 And sitting in his basket of books, while eating a book. 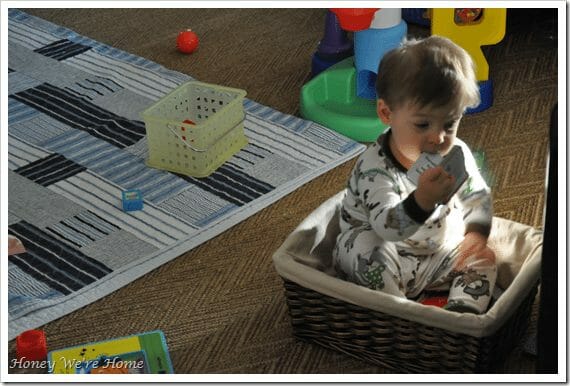 He “talks” nonstop and can say:

mama
dada
peek-a-boo
book
baby
and when he sees the lion in the book, he says “roar!”

He waves “bye” but waves to himself instead of to the person leaving.  Laughs and smiles at anyone who will engage him. Strangers at the grocery store beware!   He’ll put something in my hand if I open my hand and say, “Give it to mama please.”  His favorite foods are bananas, yogurt, moon pops (kind of like a rice-cracker), and grapes, but he loves to “share” my oatmeal and dad’s cereal in the morning.  We usually eat our weekday breakfast while curled up on the couch and James crawls right up in our faces and opens his mouth, waiting for his bites.
I’ve started finding things in the oddest places too.  Like my cell phone in the pantry or a half-eaten moon pop in one of the kitchen drawers.
He’s made connections like when the garage door goes up, dad is home and when the phone rings, he looks for it.  He’s not much of a morning person (like his mom), because he cries in his crib when he wakes up and is fussy until he’s fed (like mom before her coffee)!
But if you ask for a kiss, he’ll plant a big-ole-open-mouth wet one right on your lips!
__________________
keep in touch!
subscribe  | instagram | pinterest | facebook | twitter | bloglovin