Can y’all believe Jordan is six months old already?!  And she just turned 7 months old yesterday! Since our son is 6 years old, it’s obviously been awhile since we’ve had a baby in the house and little Jordan is making me vividly remember those early days with James.  This is where it really gets fun though, right?!  She’s just the cutest thing! I can put the top of her hair in a teeny bow now and it keeps it out of her face.  So adorable!! 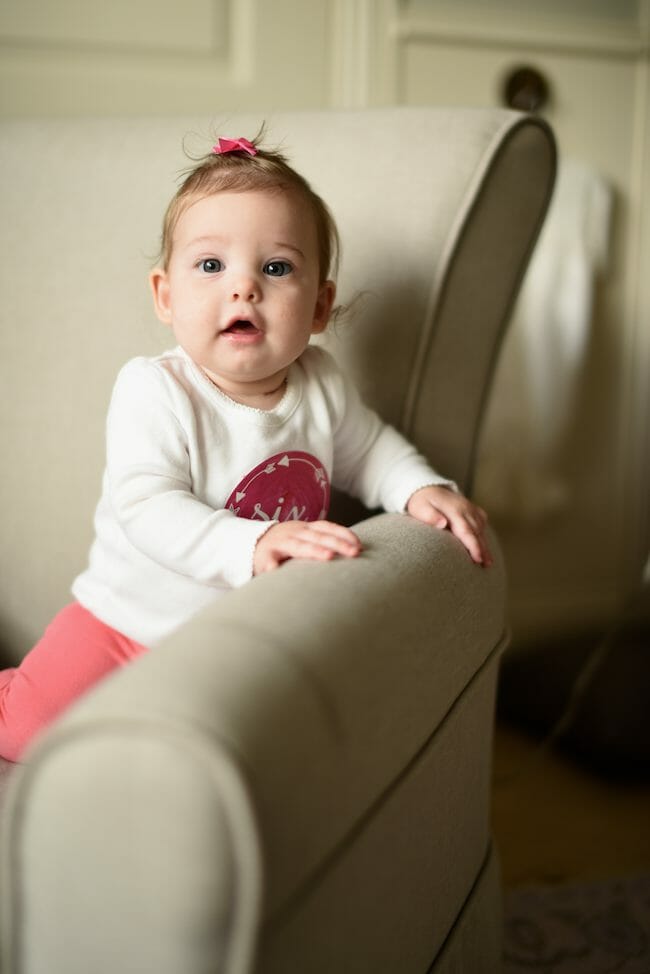 But this girl is already on the go and so much so that I can’t keep my eyes off of her.  She started rolling and sleeping on her tummy at 4 months, scooting at 5 months, and now full-on crawling, sitting up, and even pulling up at 6 months! We had to lower her crib mattress because she pulled herself up in there!  She’s also tipping over some, and has banged her head twice, so I went ahead and put her crib bumper back on so it would soften any falls.  Hopefully, she’ll be steadier in a few weeks and then I’ll go back to the mesh bumper if she needs it.  I still had to tie the bottom ties in the pics below, in case you were wondering. 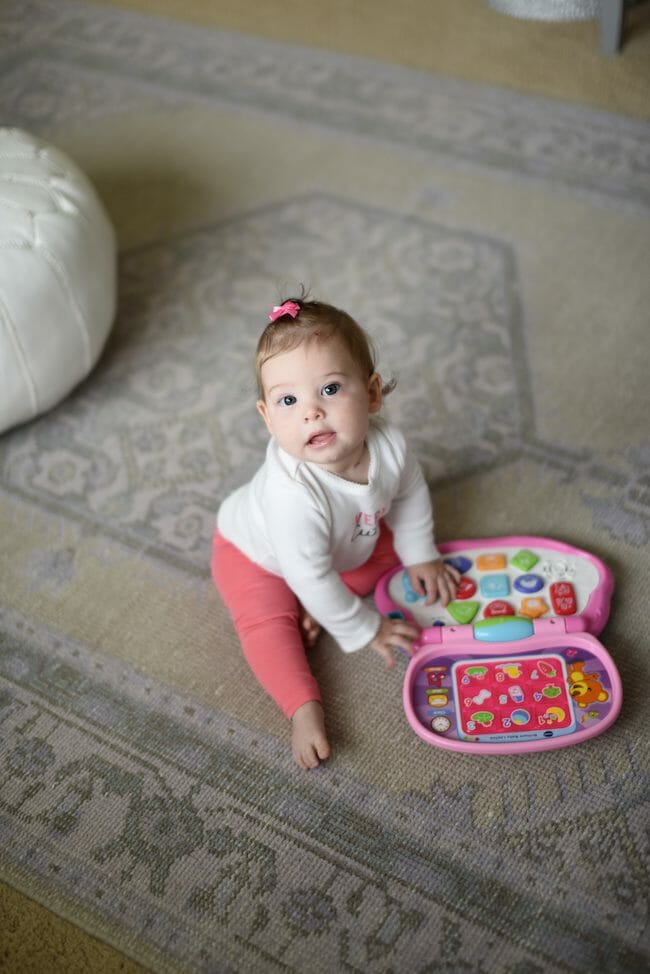 Not much holds her attention for long, but this baby laptop gives me a few minutes while she’s enthralled with the animal sounds and music that it plays and it also lights up.  I also appreciate that you can choose a loud or quiet volume, but it’s good that this toy’s sounds are pleasant! 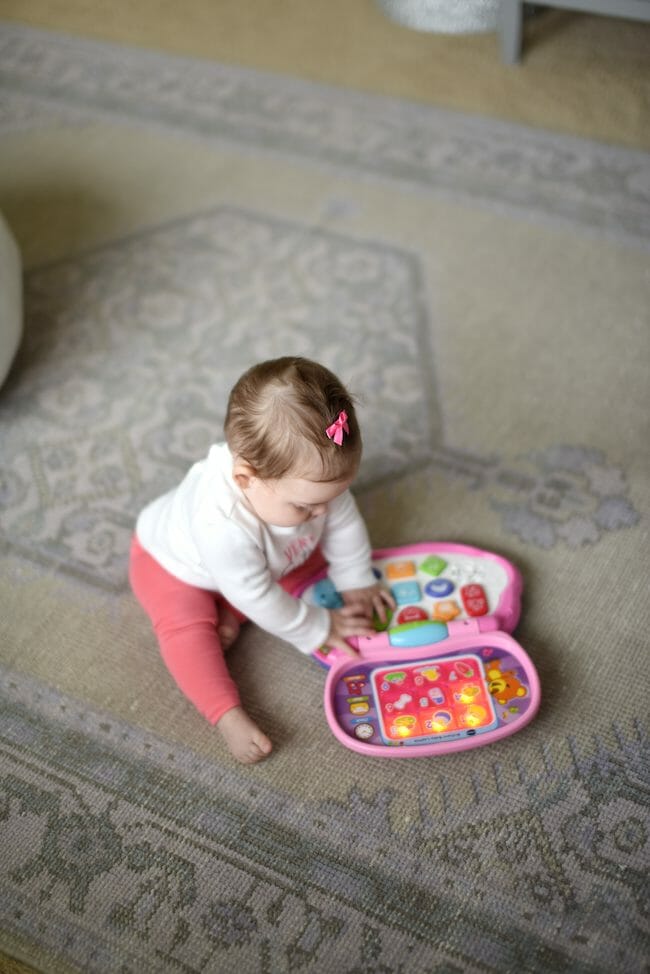 It’s also sturdy enough for her to bang around on and crawl on.  I  bet it will even keep her entertained in the car soon! 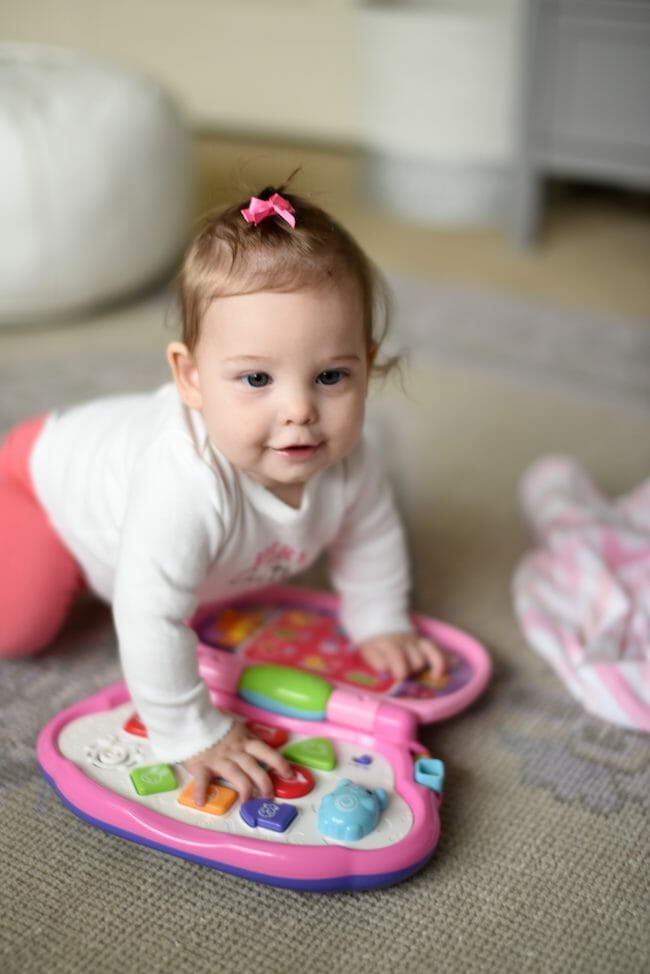 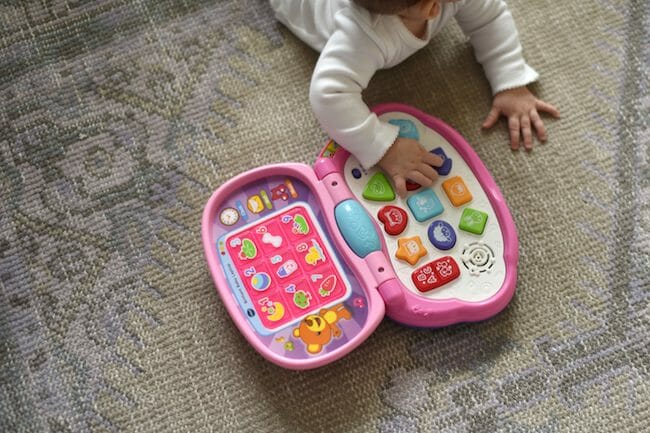 What she’s really all about though, is her big brother!  She lights up when he’s around and always wants to be a part of what he’s doing. 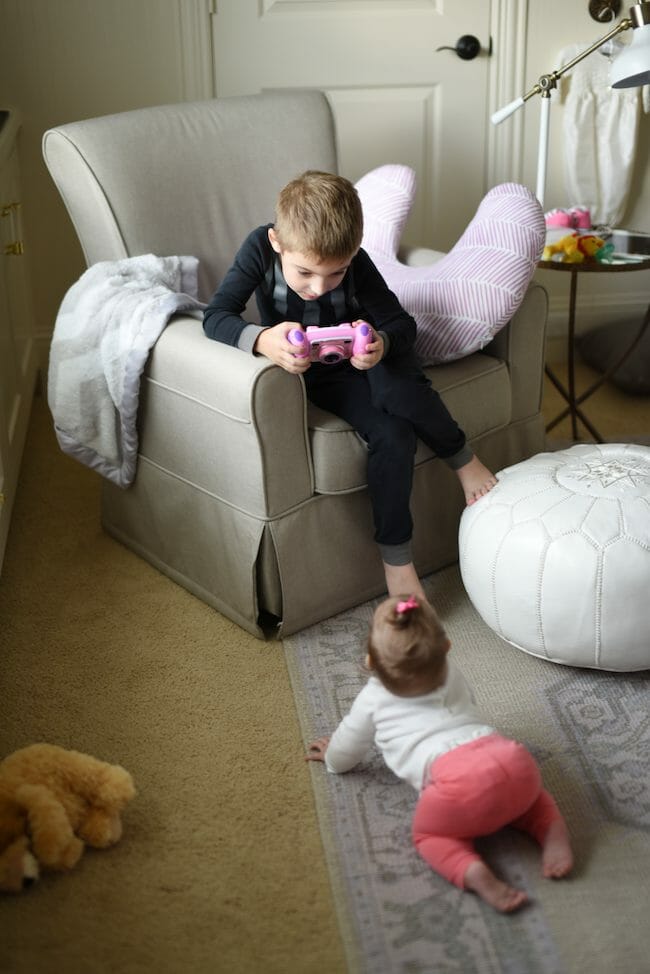 VTech sent a Kidizoom Camera Pix, which operates as a real camera/video camera and also plays games, so I was a little worried about it being a complicated set up, but James opened it up, inserted 2 AA batteries and figured it out all on his own!  He set the date and time too, but that’s all there was to it!  Super user friendly! 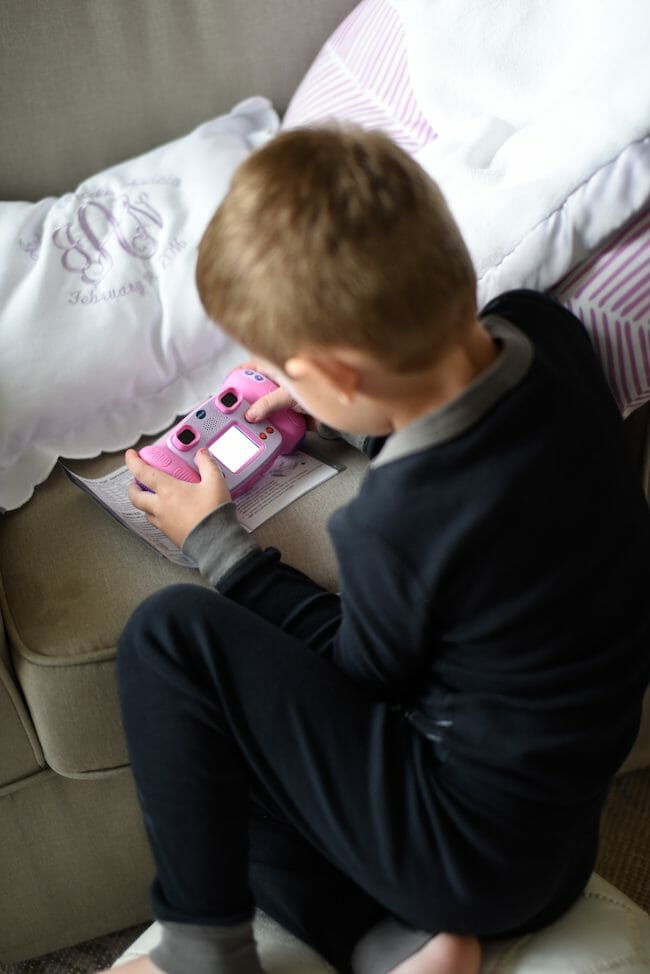 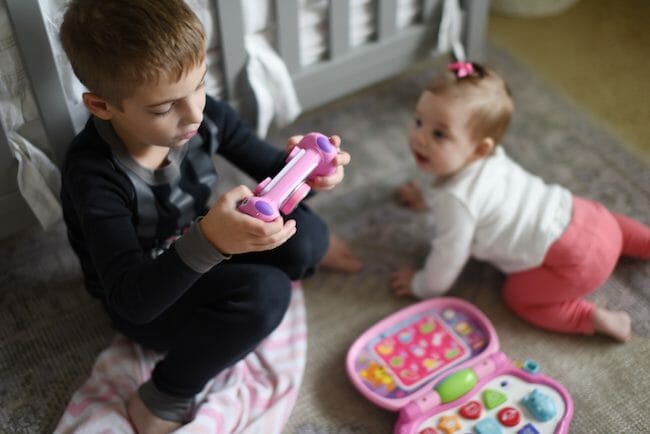 It even takes selfies! 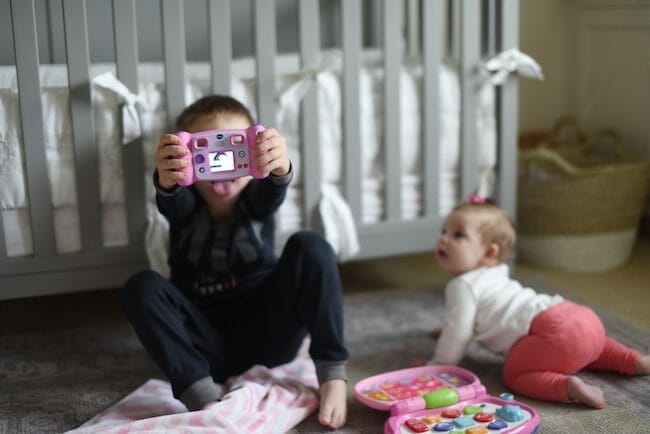 I love the look on Jordan’s face while she’s watching him! 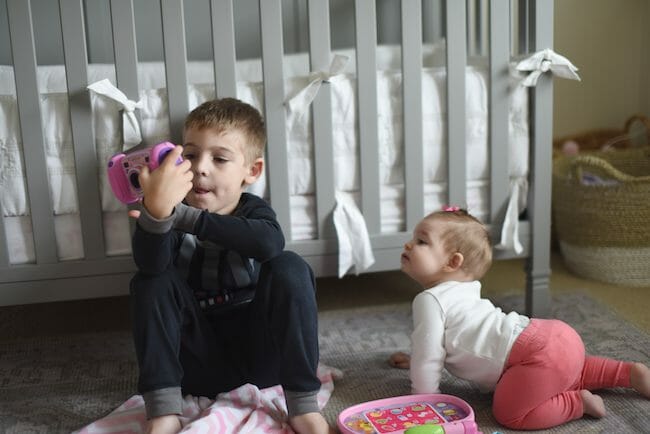 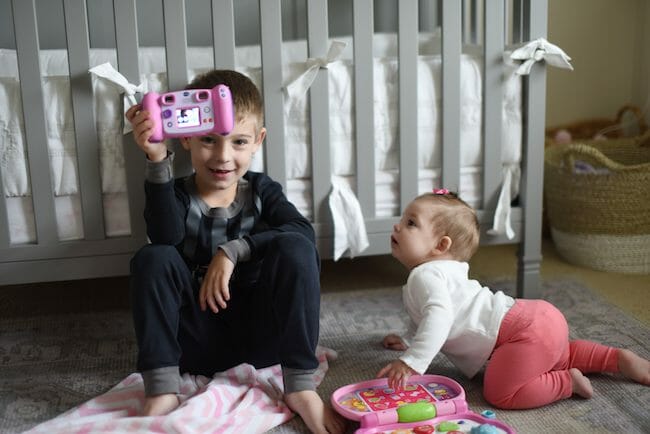 James was super into the four games it plays and got right into those.  Of course, Jordan wants to see what’s going on too, but sometimes he wants to play alone! I get it, I had two little brothers and my first brother is 6 years younger than me, the same age difference as James and Jordan. 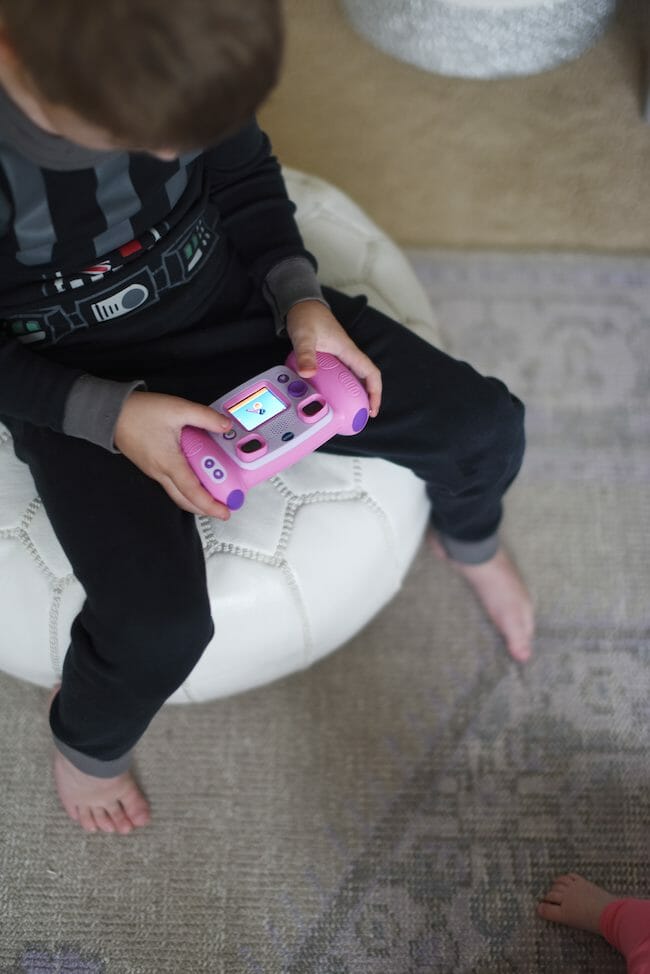 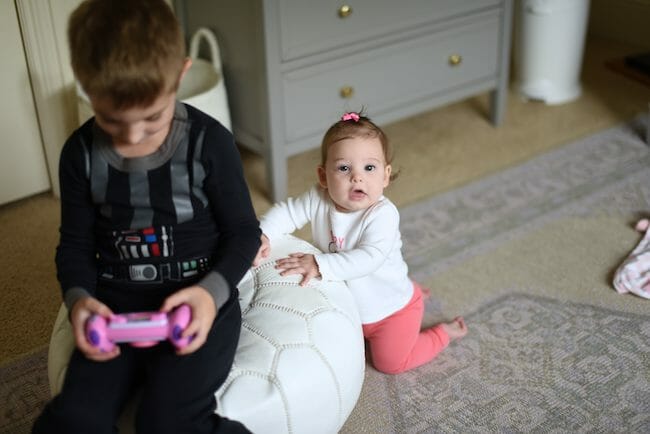 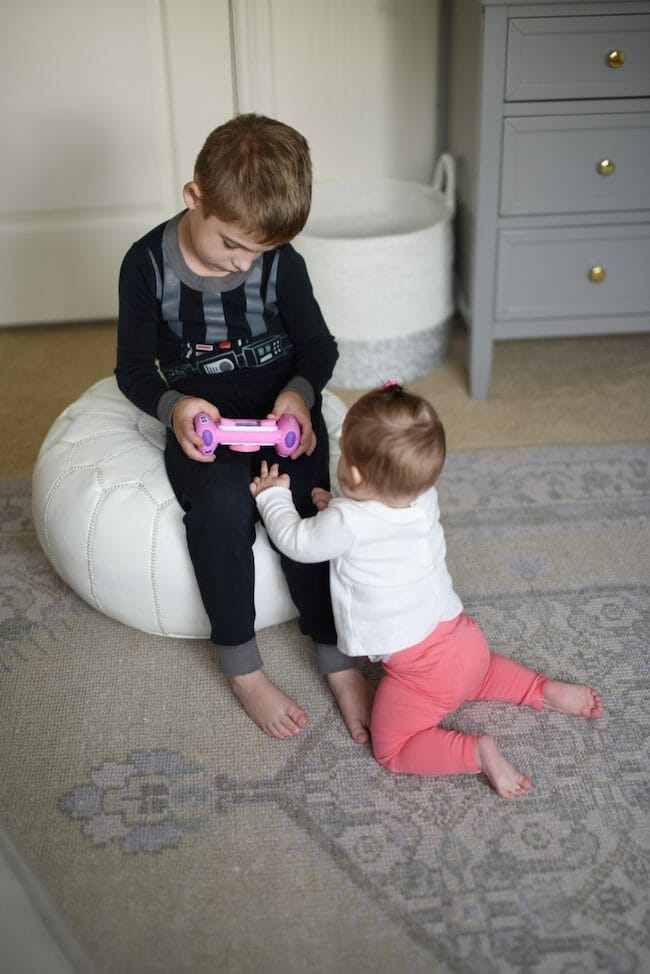 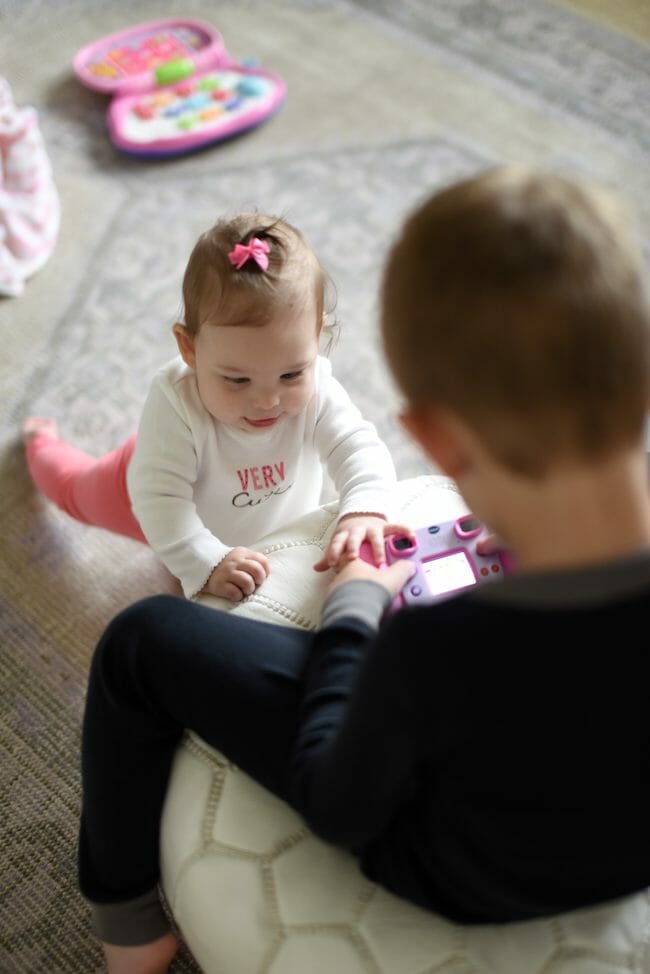 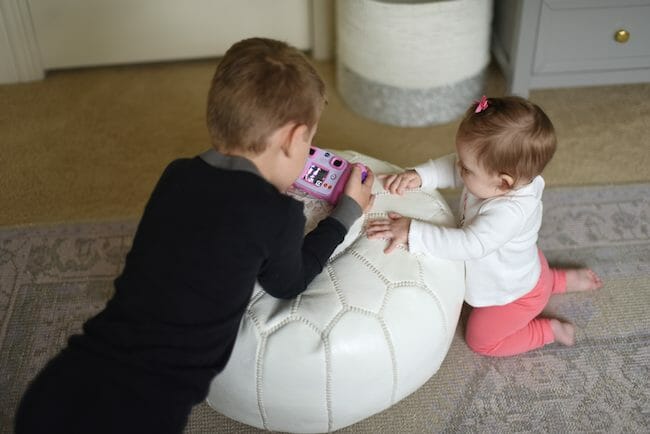 So I told him, just show her what you’re doing and you can teach her.  She’ll probably lose interest soon enough anyway! So, he took her picture and showed it to her!  He’s such a good big brother! 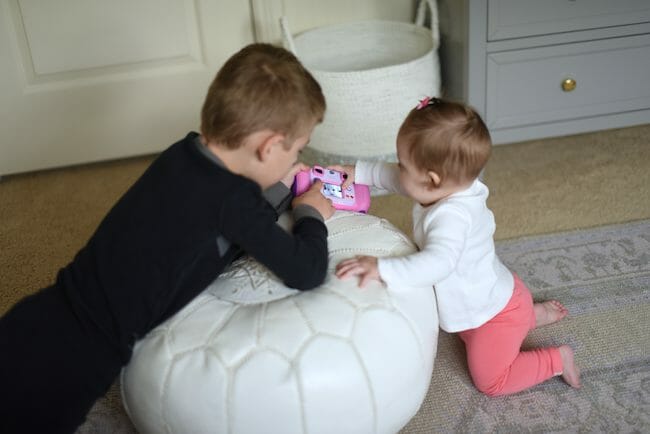 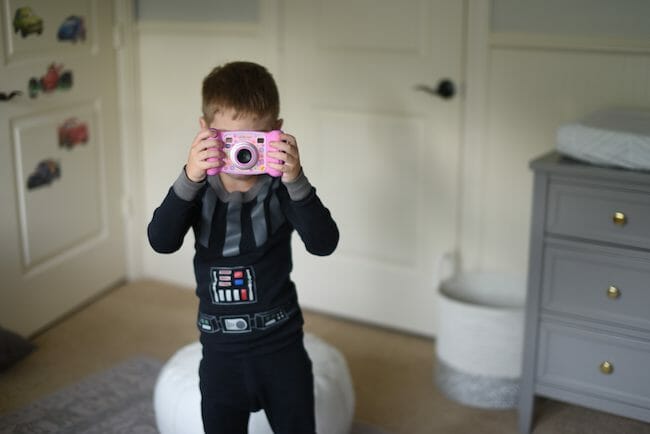 Life with these kiddos is really the best.  I’m so thankful to be their Mom! 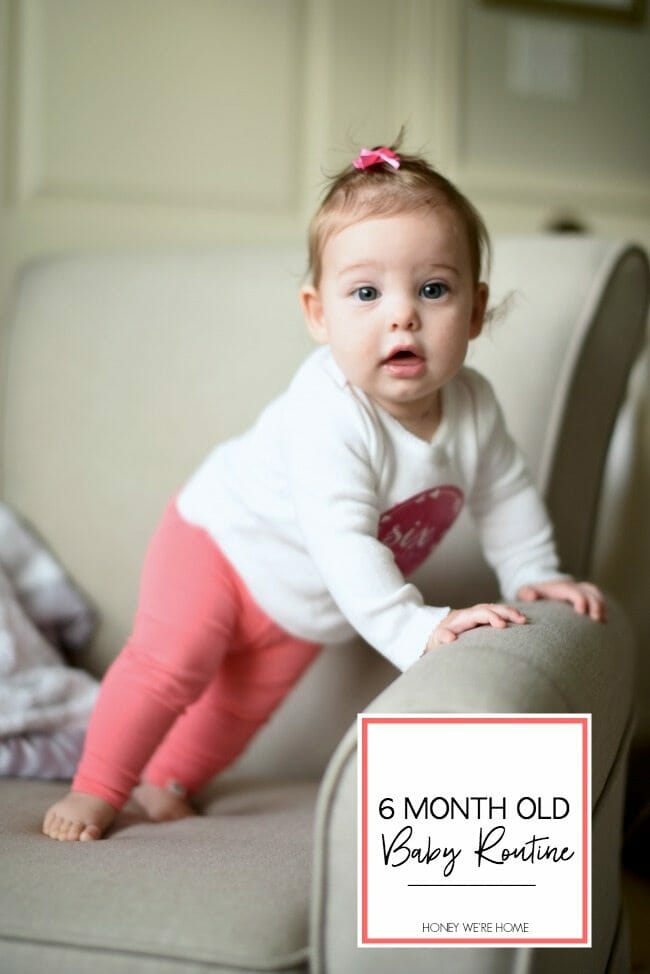