We only have one week left before the big, final reveal of our nursery on the One Room Challenge and I’m really crossing my fingers that everything falls into place!  There are still some last minute orders that have yet to arrive.  #pleasehurry!
I mentioned before that had it not been for the ORC, we probably wouldn’t have gotten started on the nursery yet, especially since we didn’t yet know the gender, but given I’m drawn to neutral spaces anyway, I figured Sita and I could design a neutral nursery and then add in touches of color once we found out.  Now that we know we’re having a GIRL, we’ll be adding touches of lavender to make the room more feminine. It’s going to be such a pretty room!
As far as this week’s progress post goes, all I have to say is thank God for professional painters, and specifically, thank God for Ruben and his crew!  In two and a half days, they painted the entire nursery, including the built-in bookcase (which had to be caulked and primed), walls, beadboard, and stripes on the ceiling!!!  (They also painted the closet and attached bathroom and cabinets while they were at it). Aside from being pregnant, I could never have done this on my own.  And even if I could, I’m sure I wouldn’t have wanted to and it wouldn’t have turned out nearly as good!  If you’re in Houston and need a quality painter, let me know! I highly recommend Ruben!  He can also share where to get the best authentic Mexican food in town. #bonus! 🙂
Let’s start at the beginning.  You might remember that this nursery used to be our 5-year-old son’s room and it had dark blue walls and a light blue ceiling.  We had a built-in bookshelf and bench seat constructed and installed in the room, but it still needed to be caulked and primed.
After the bookshelves were installed, we were left with a room that looked like this. 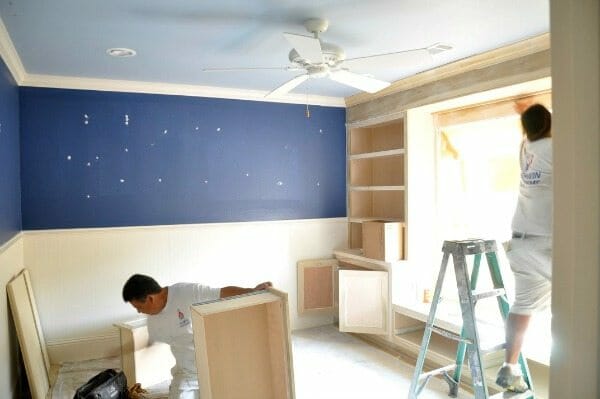 The guys first got to work caulking the bookcase and trim. 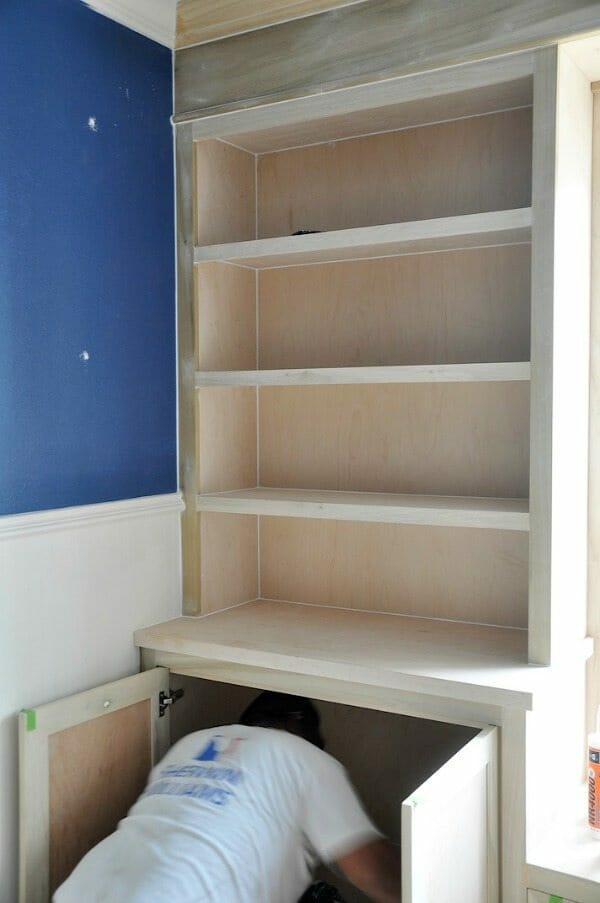 For the stripes on the ceiling, we had originally planned to wallpaper, but given the expense, I knew we could achieve just as good a look with paint.  Also, I didn’t have any recommendations for wallpaper installer and I knew it would require a professional.
So, the next step for my awesome painters was measuring the ceiling so we could figure out how wide to make the stripes so they could all be consistent and we wouldn’t end up with a tiny stripe at the end of the ceiling.  This is also where having Sita on board really helped – I quickly confirmed with her via text that the stripes would go from wall to window instead of longways, and we were in agreement that they would be about 12 inches wide.  We also wanted the chandelier to be on a grey stripe if possible, to make it pop, but based on the measurement of our ceiling, it ended up centered between a grey and white stripe. 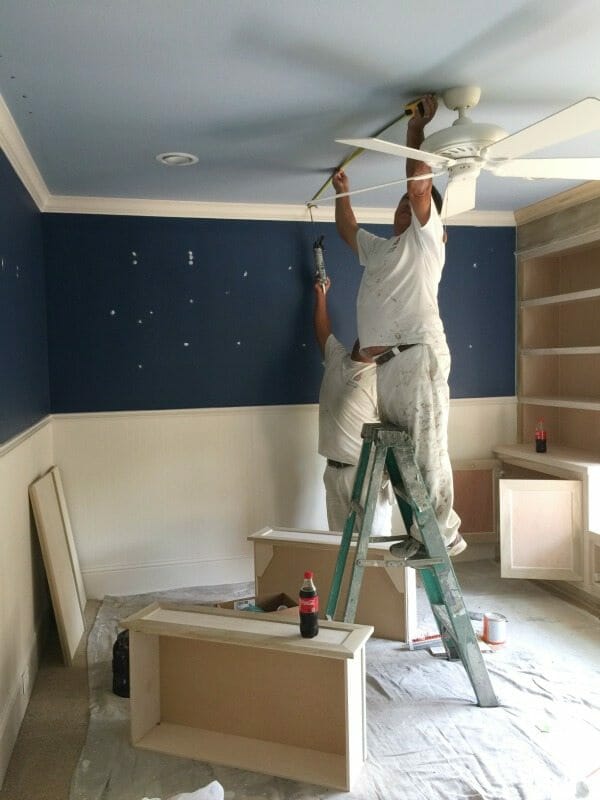 I was fortunate to work with Sherwin-Williams on this project and they provided the paint.  It was great to know that Sherwin-Williams has a paint line that is baby friendly, the Harmony paint line. It has a zero VOC formulate that helps reduce common indoor odors to help rooms stay fresher longer. It improves indoor air quality by reducing VOC levels from sources like carpet and fabrics and gives walls a washable, durable finish. 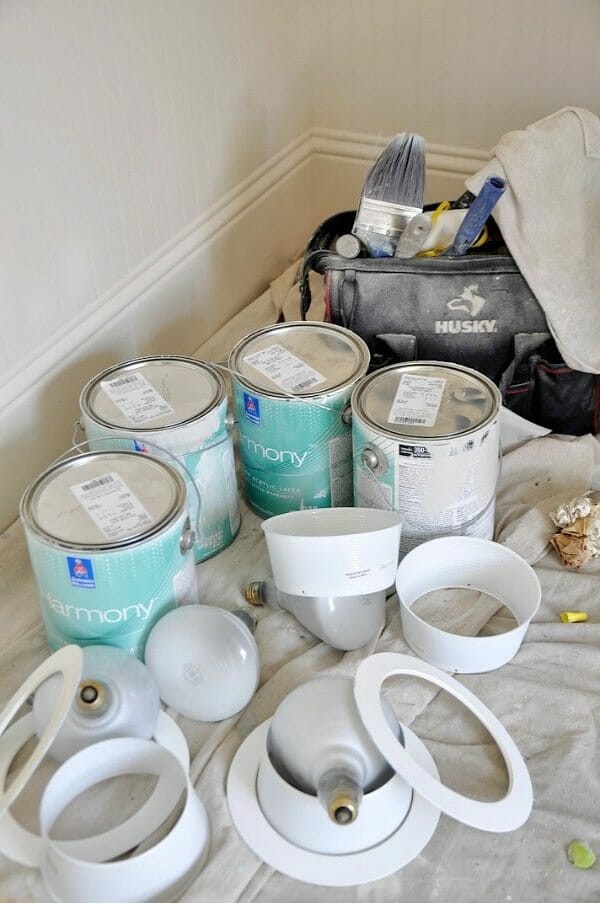 Since our beadboard, doors and trim are already painted Sherwin-Williams Divine White, we decided to stick with that color for the bookcase and the white stripes on the ceiling.  Divine White is a creamy white, not a bright white, but it’s calm and soothing.  The contrasting color I choose is Agreeable Grey for the upper walls and corresponding ceiling stripe color. 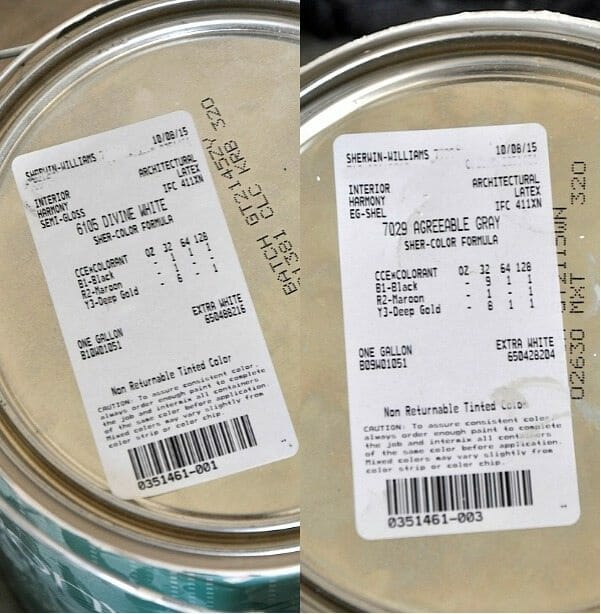 The painters first painted the entire ceiling Diving White, then used a level and pencil to mark the stripes.  They used painters tape to mark where they would paint. 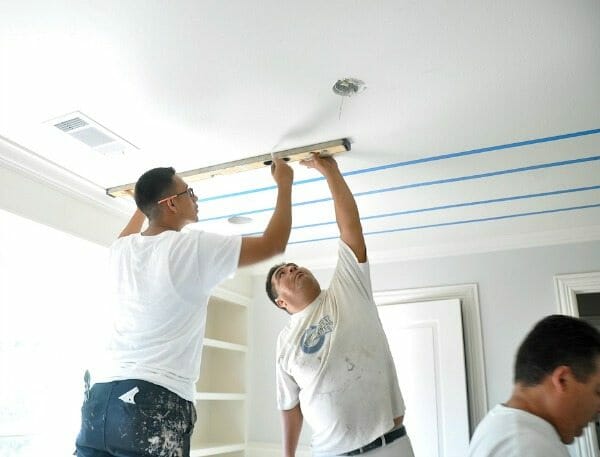 What a job to get those lines straight! 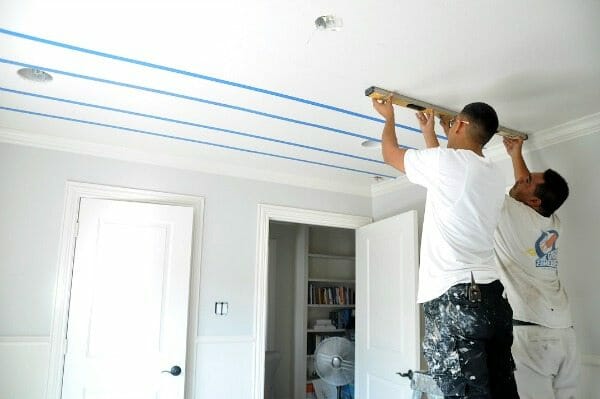 Finally, it was time to roll on the Agreeable Gray. 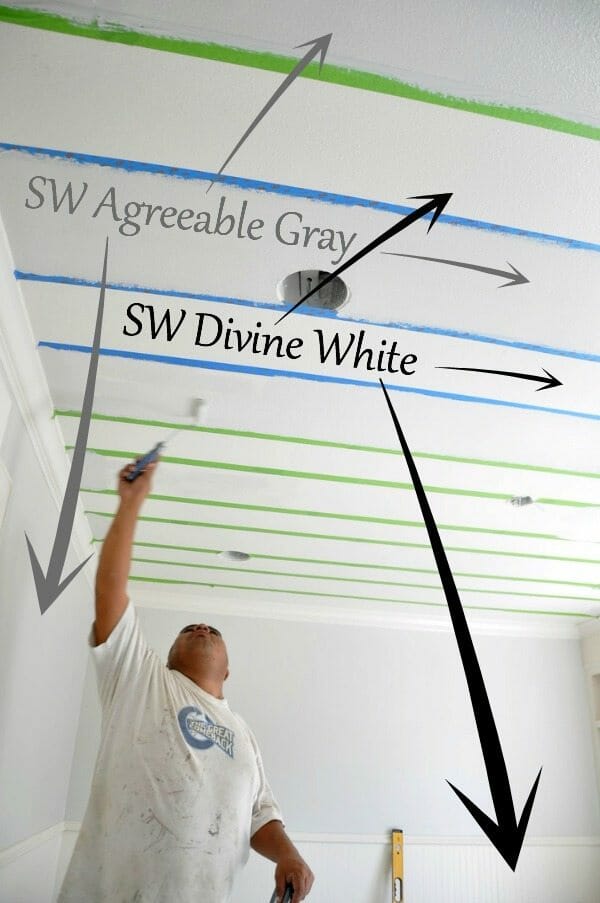 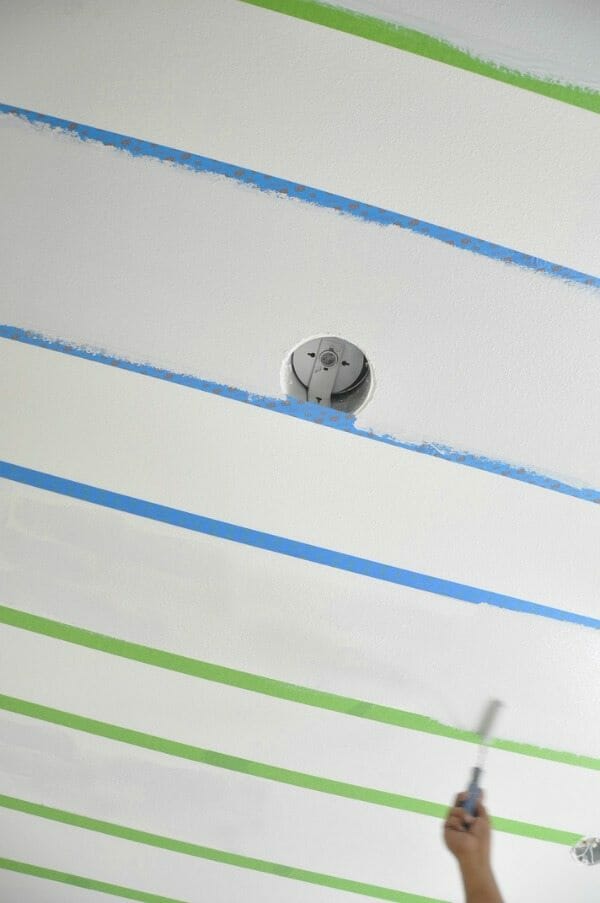 After all the stripes were painted, they removed the tape and reinstalled the lights. 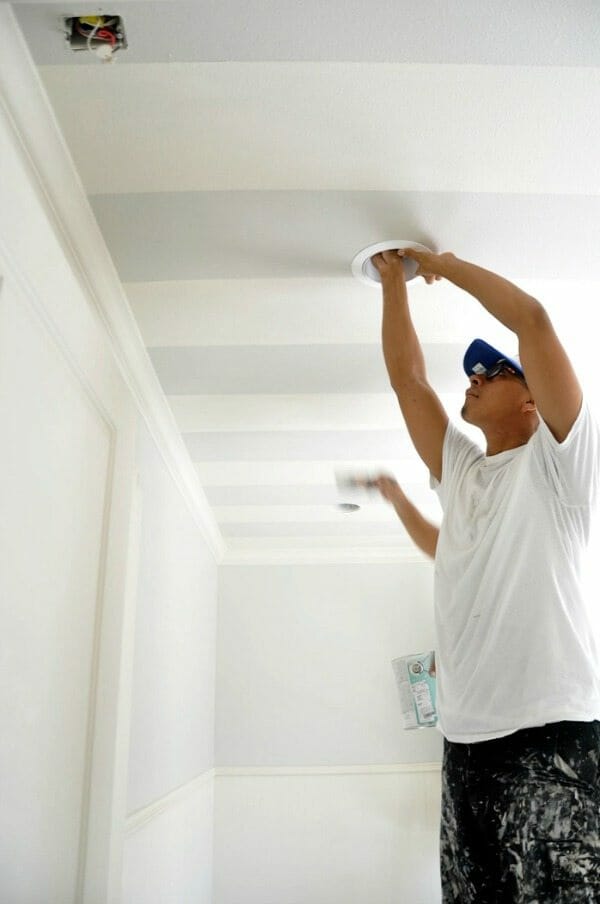 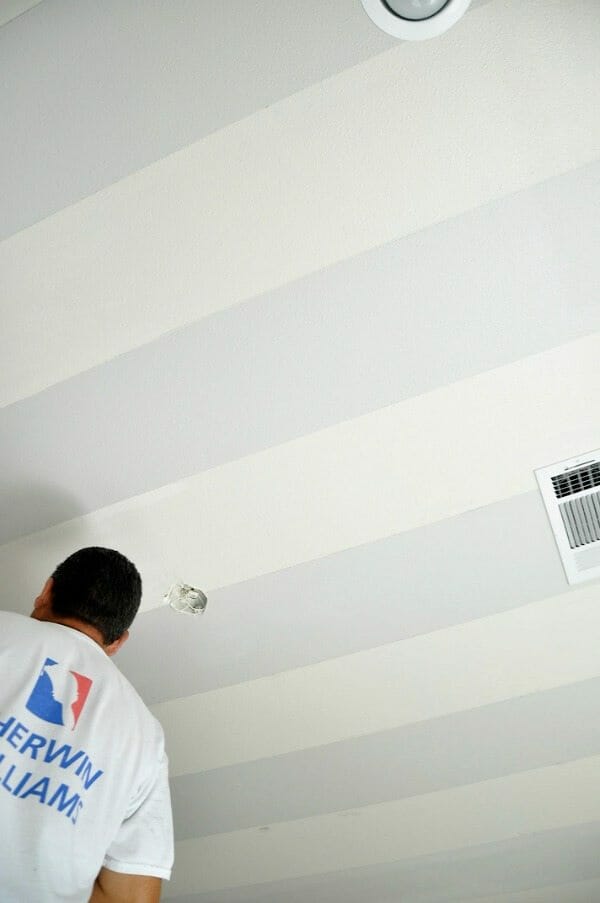 Using an angled brush along the line, they touched up any spots that needed it freehand.  Those guys are good! 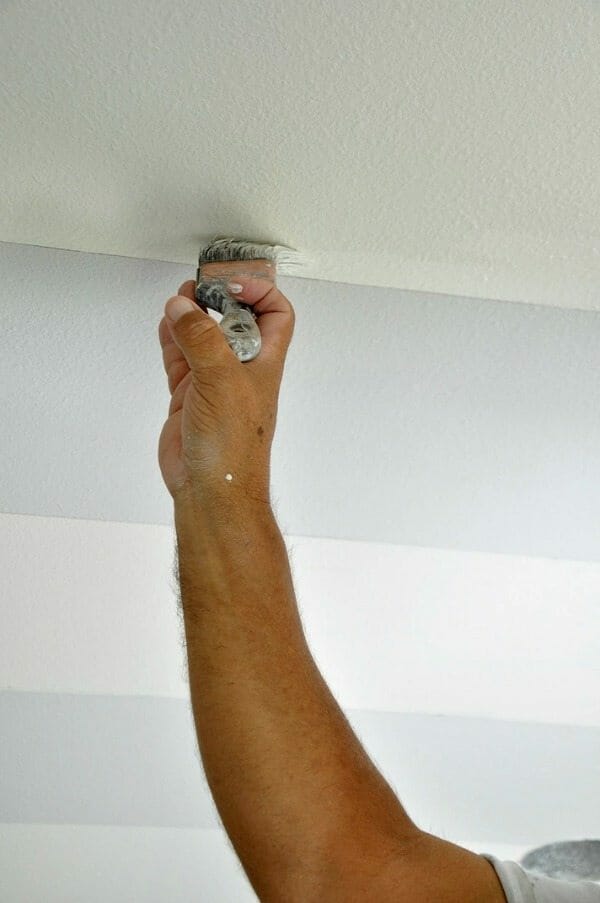 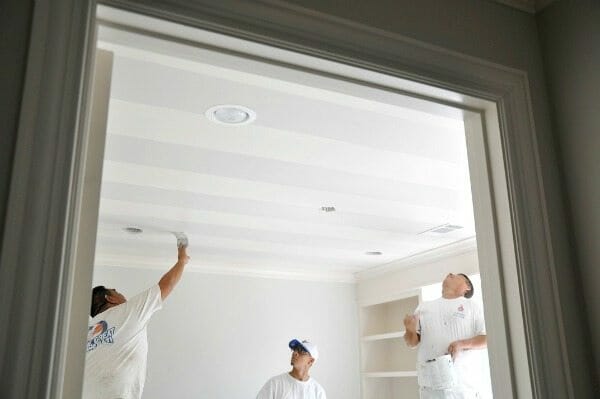 I’m so very happy with the way it turned out and it looks amazing with the grey furniture in there! 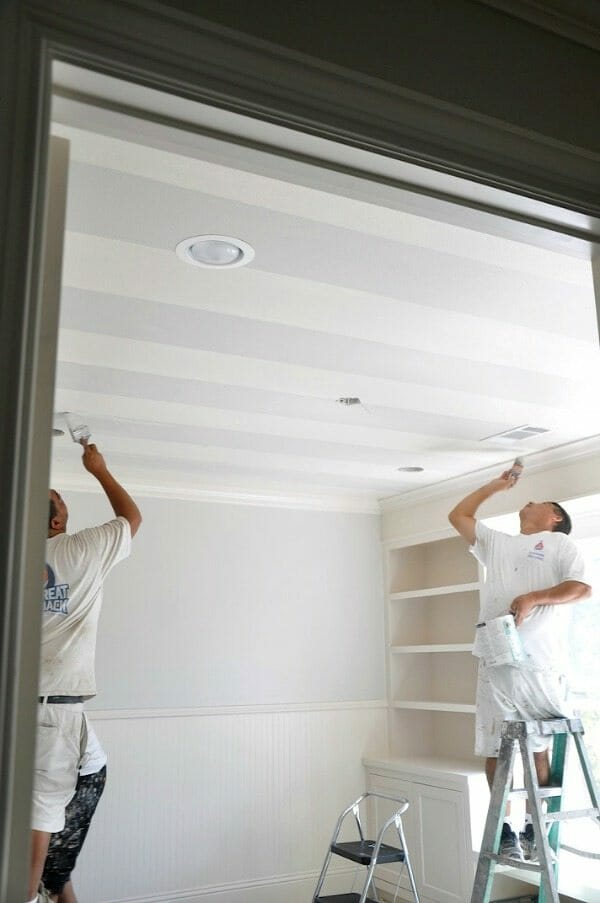 So, still left to do is:
TO DO LIST
*Paint walls and ceiling
*Assemble furniture (crib, dresser, and glider)
*Receive rug, pillows and pouf
*Floor lamp arrived (thanks Bassett Mirror Company!)
*Receive mirror

*Pillows arrived (thanks Arianna!)
*Roman shades are on the way (thanks Melissa!)
*Choose bench seat fabric and build bench seat

*Choose bookshelf hardware and receive and install
*Choose dresser hardware
*Accessorize bookshelves
Get caught up on my past ORC posts here:

Each of the bloggers below are also participating in the One Room Challenge and you can click on their name to follow along with their progress too.  I can’t wait to see what everyone has up their sleeves!  See you next week!