Are y’all recovered from the long weekend? It feels like an extra case of the Mondays around here, but after a cup of coffee I’m sure I’ll be up and at ’em.  There’s still so much to do after being out of town for the weekend and the laundry I meant to do yesterday is still sitting in piles, but at least it’s out of the suitcases!  We spent Labor Day weekend at a rental house near San Antonio with my whole family and it was the first time we’ve gotten to spend such a long time together since my Dad passed in March.  He would have loved to have been there, and was greatly missed, but we all agreed that it was a fabulous weekend and we’re already marking ‘same time next year’ on our calendars.
__________
This week is the 14 week mark for our pregnancy and I’ve been so touched by your sweet comments and thoughtful words of encouragement as I’ve shared our happy news lately.  I love this blog community so much! After over 5 years of blogging, it really feels like I’m sharing this journey with old friends!  And it’s so cool to hear that some of you are also expecting, so we are on this ride together!  🙂
I won’t do weekly bump updates, but will share every month or so how it’s been going, especially since I really want to do this pregnancy different from my last one!  You might  remember I gained somewhere around 55 pounds with James and felt pretty miserable and unhealthy.  Not to mention it took a long time to lose the weight and feel like myself again.  I always knew if I was blessed to become pregnant again, I would be mindful to eat healthy and continue to workout.  My priority is a healthy pregnancy for the baby and me and, after a bumpy start, I’m already doing way better than I was the first time! 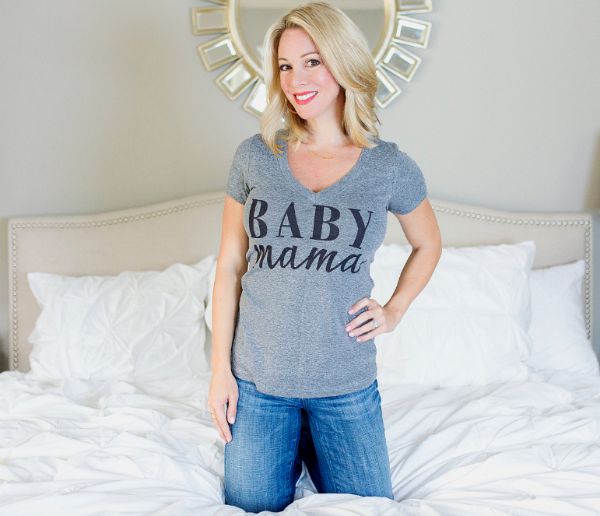 baby mama tee (size Small) | jeans
5-9 WEEKS
If we back up to when I realized something was amiss, about one week out from my bikini contest, I was noticing that my lower tummy wasn’t coming in as tight as it did the year before and it felt like I couldn’t get the scale to budge lower than 105 pounds.  In 2014, I competed at 100 pounds (I’m 5’0).  I had missed my cycle but a the few pregnancy tests I took said negative, so I was really worried that I had messed up my body by getting my body fat too low (although I was also confused because my body fat really wasn’t too low, sticking right around 18-19%).

Finally, the Wednesday before I competed, I took one more test ‘just because’ and was so floored to get that positive sign.  I was home alone in my kitchen reading the result and immediately started bawling.  Big hot happy, joyful, blessed tears!  But I still couldn’t believe it!  I think my first call was actually to my mom and we cried together on the phone.  Then, because this particular test was one I had never used before, I started doubting whether it was accurate and so I called another chemist/scientist friend and texted her the result image.  She assured me I was pregnant and when I told her I was going to the store to get more tests, she was like, “you are definitely pregnant, because that’s something only a pregnant woman would do.  The chemistry of these tests don’t lie.”  But, I still bought two more test different brands and when they all came out positive, I felt confident I was actually pregnant.  My husband was pretty excited to hear the news too.

Suddenly, competing in the bikini contest felt so insignificant but since it was only a few days away, I went ahead and finished, although I didn’t take any diuretic and made sure the spray tan was safe to apply.  The day of the contest, my lower belly was pooching out so bad, I wanted to shout, “I’m pregnant” but of course I didn’t.  Turns out, I was 5 weeks along when I competed.

The next week, at the Haven blog conference was the first time I started feeling really bad.  Every morning I felt like I was going to be sick and actually considered going home early.  My two roomies, Cassie and Jen, were my saviors, bringing me a light breakfast and Ginger Ale each morning and encouraged me to stay, reminding me I could always come back to the room if I needed to and they were still having a great time despite my low energy and how lousy I felt.  Later, I found diet Ginger Ale at my grocery store and it actually does help settle an upset stomach.  It tastes fine too. 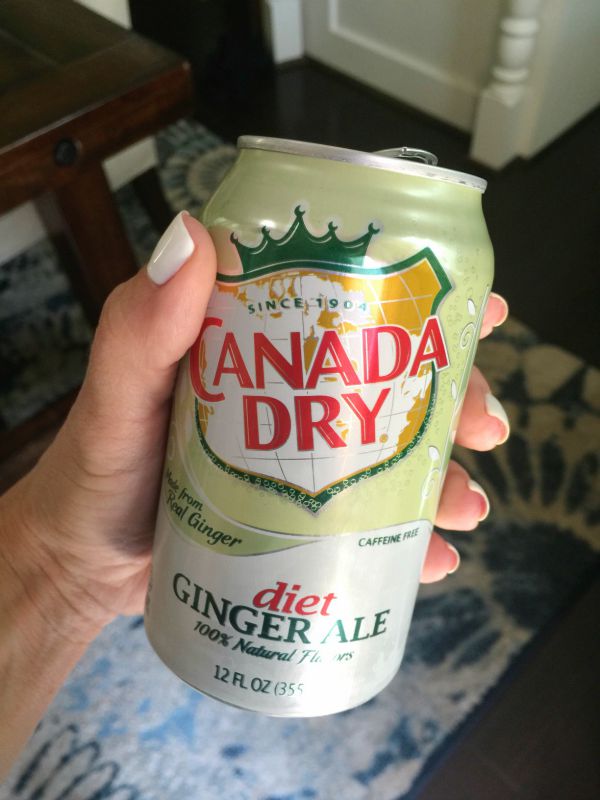 Back home, from weeks 6 to about 10, I was so beyond exhausted that I could barely keep my eyes open.  You moms can probably relate to that I’m sure.  It’s tiredness on another level and I kept wondering, “What did I do when I worked full-time and couldn’t nap during the day?”  I know like other working moms I just muscled through it and went straight to bed when I got home.  This time, I was able to sleep on the couch some during the day while James played in the living room. 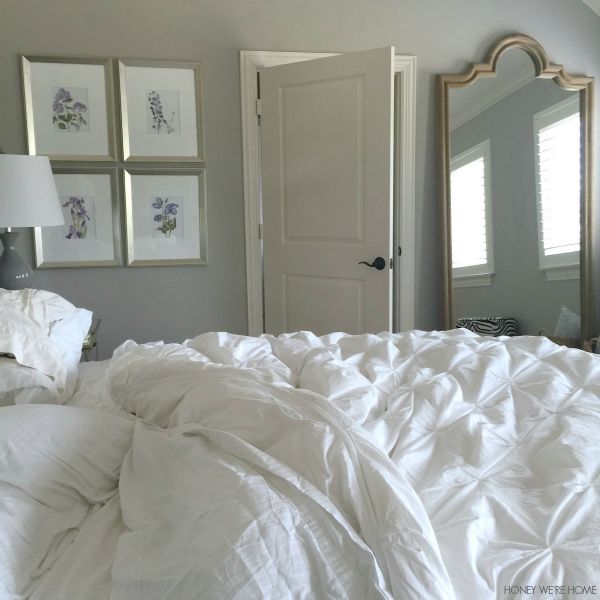 I’d gained 5 pounds by this point, up to 110, even though I was still working out with my trainer 2-3 times a week.  I’m not surprised though because I was so hungry and eating everything! And not healthy food either.  We’re talking McDonald’s Big Mac and Mexican food.  I can only liken it to feeling halfway nauseous, but more like a hungover feeling where you just crave greasy food.  Even though I knew this was definitely NOT how I wanted to be eating, I felt like I couldn’t help it.  But, after a few weeks of eating like this, I was feeling really sluggish and knew that was not at all healthy, so I had to change or I’d be on the same track I was on with my first. 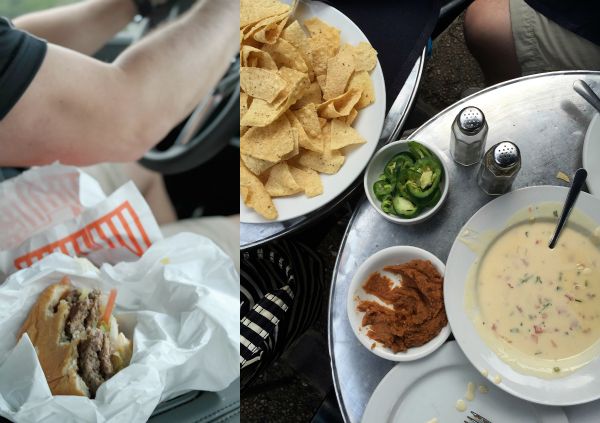 Also, by 9 weeks, my skin started breaking out.  I went to my dermatologist and he recommended two topical locations (Finacea and Acanya), and they help some, but mostly make my skin extra dry.  Did y’all have trouble with breakouts?  Any solutions you can share?  With James, my back also broke out terribly, but so far, it’s mainly just my forehead and slightly on my cheeks.
10 WEEKS
James went back to school when I was 10 weeks along and I was only glad because I had been so , so very tired that I was napping on the couch in the afternoon and he was just sitting by me playing video games.  He was fine with that, but I felt bad that I wasn’t up for doing more.  I was just starting to feel like I could make it through the day awake and just go to bed early when it was time to go back to school.
Getting to go for the first ultrasound was so thrilling!  When I heard the baby’s heartbeat and saw it on the monitor, I swelled up with emotion.  The nurse printed out the picture and I instinctively kissed it!  The baby’s heartbeat is healthy and strong and our due date is March 7! It’s so overwhelming and suddenly so very real when you see and hear your baby for the first time.  I wanted to tell James right away, but we waited just a bit longer.  And when he found out, he was so sweet kissing my belly and full of questions.  He is so excited to become a big brother. 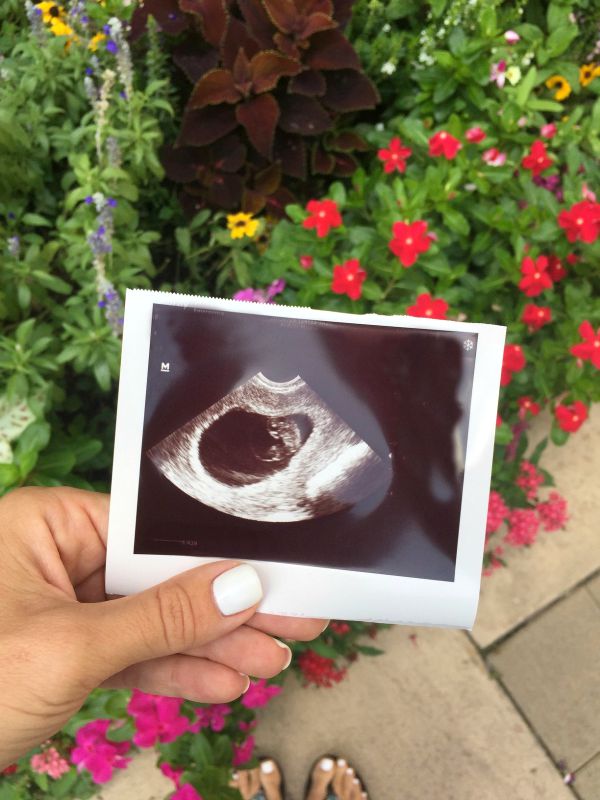 12-13 WEEKS
Like magic, right around the 12 week mark, I started to feel much, much better and had more energy.  Don’t get me wrong, by 9:00 p.m., I’m definitely ready for bed, but during the day I can actually function all day.  I’m started adding in cardio (30-45 minutes) and have had some great workouts with my trainer.  I plan to keep going 3 days a week, although we take it easy now and I make sure to listen to my body with how I’m feeling.  My doctor gave me the go-ahead to continue, so I feel good about it.  I didn’t workout at all while pregnant with James and I regretted it. 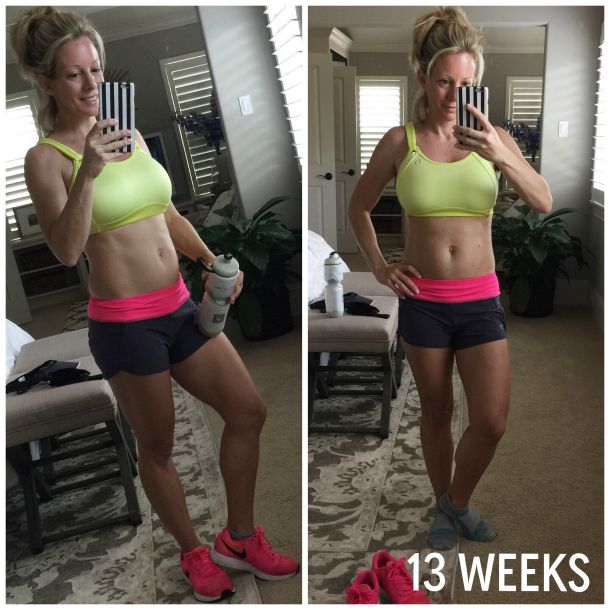 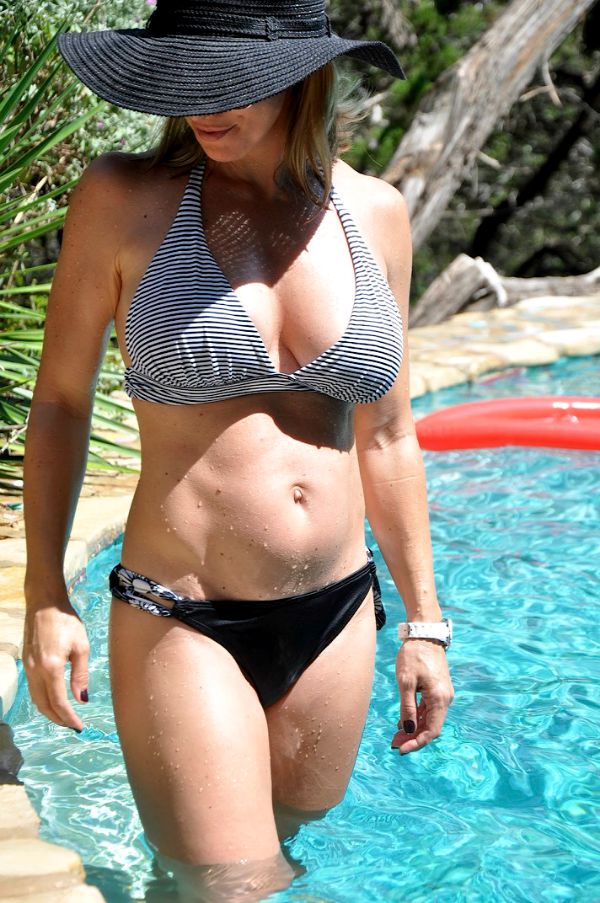 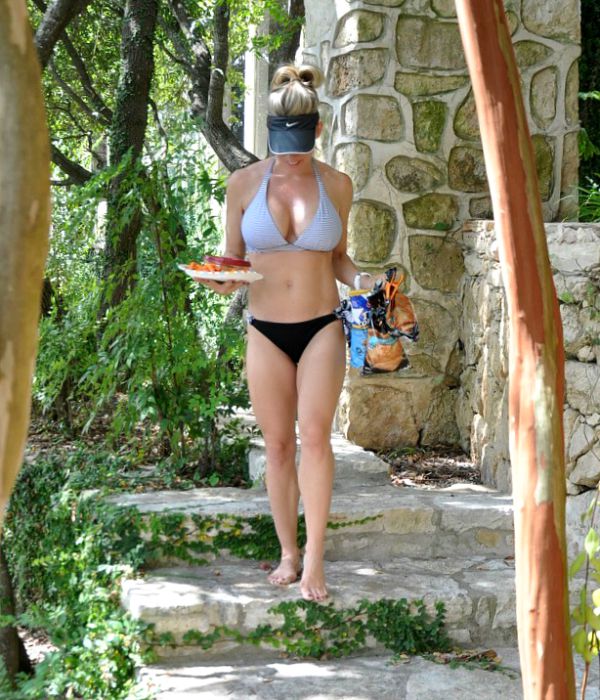 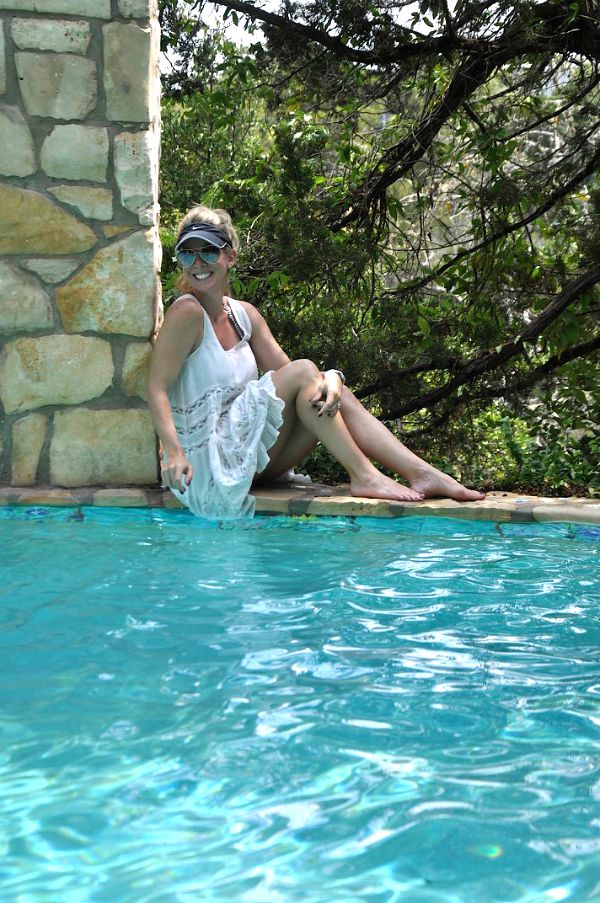 I knew this Free People tunic would come in handy as a bathing suit cover up! I also wear it with jeans and it’s great as a loose-fitting dress.
Also, I’m back to eating healthy and don’t really crave sweets that much.  The wildest thing is I’m not really interested in coffee anymore.  I was a coffee-aholic before, going to bed thinking about my hot coffee in the morning.  Now, I don’t even want it.  But, with the doctor’s okay, I do have one cup after lunch, just for a boost of energy, or maybe just an iced tea.
I’ve been eating my protein pancake for breakfast (with peanut butter and a cup of 1% milk), a grilled chicken salad for lunch, a yogurt with granola and fruit for a snack, and lean meat, veggies and potatoes for dinner.  This is just generally, but a good idea of what a typical day looks like for me.
I’ve also been thinking lately about how my heart is so full of love for my son that it feels like how could there possibly be room for more?  I don’t know if any of you experienced that while pregnant with your second, but I’m sure it’s normal emotions and I just thank God that He gives us the capacity of love beyond what we think we are capable of. 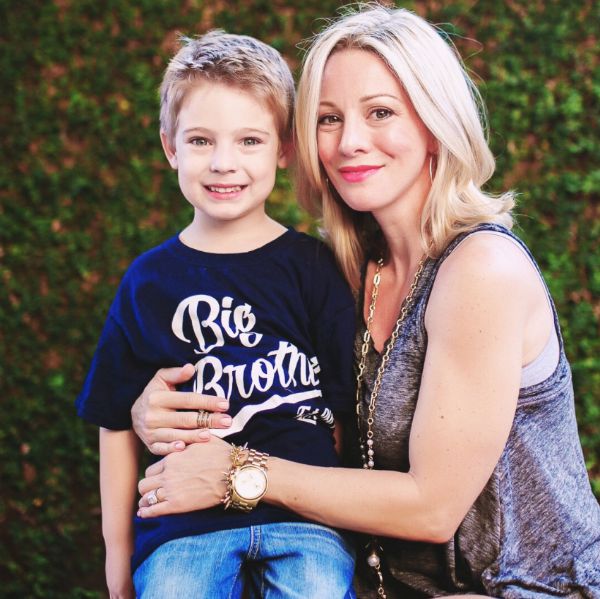