Have you gotten your man or dad a gift for Father’s Day yet?!  Did you just panic a bit being asked that question because your answer (4 days away from the big day) is still a sheepish, “no”?  I’ve often found myself in the same boat, usually for a child’s birthday party, and I always resort to my secret source that isn’t such a secret – Amazon!  I have Amazon Prime, which gets me free 2-day shipping and I have found it to be totally worth it, especially in a pinch.  I used it on Tuesday and ordered a Father’s Day gift that will arrive today!
All of the Father’s Day gifts below are from Amazon, so you can order them today and get them in time for Sunday!  And they are “man approved” at least by my husband.  He did throw out some of my ideas- a cookbook? “men don’t read cookbooks,”  this coffee mug? “lame,” and he also said no on the robe and apron.
Even if you’re already covered for Father’s Day, keep this list handy for Christmas or his birthday! 😉 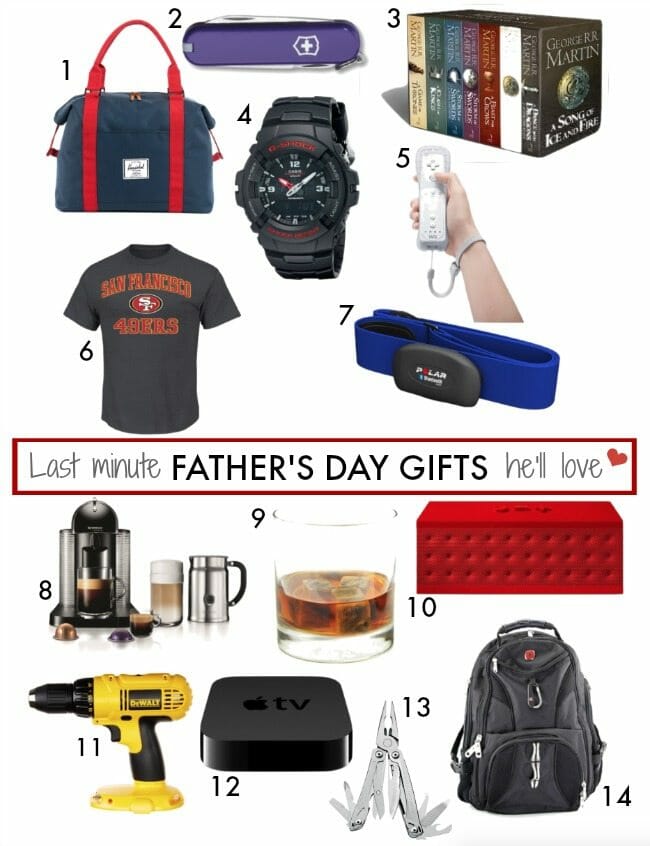 1 ::  Herschel Supply Co. Duffel Bag $59.99 (3 colors)- I featured this bag before from Nordstrom, but if you don’t have time for that, you can get it quickly on Amazon.
2 ::  Classic Swiss Army Pocket Knife $20, $12.49 – Even I have to admit, his pocket knife comes in handy on lots of occasions.  And like our shoes, they can never have too many.
3 ::  Game of Thrones 5-Book Boxed Set $26-$47 (paperbacks) – My guy is hooked on the show and I try to avert my eyes and ears while it’s on.  Several of my girlfriends are hooked too, but I just can’t . . . He said if you like the show, you’ll probably like the books (but they’re really long reads).
4 ::  G-Shock Watch Black Resin $99, $57.22 – 1,440 postive reviews on this one.  Wear it casually or during workouts.  Comes in lots of colors/styles.
5 ::  Wii $211 – A lot of guys are still kids at heart and like playing video games.  Which one is a matter of personal preference, but my husband said the Wii is good for playing with kids.  Or maybe that’s just his excuse . . .
6 ::  HFL 49ers Tee $19.99 – Sports gear of almost any kind gets a thumbs up, especially in your man’s favorite team.
7 ::  Polar H7 Heartrate Monitor $79.95, $49.95 – Of course I swear by this particular heart rate monitor because it’s accurate, easy to use and, if you have an iPhone or iPad, you can use the app and bluetooth to wirelessly sync the data.  I can’t live without mine and my husband loves his too.  It’s also crazy to compare when we’ve worked out for the same amount of time (even if we’re both on the bike or doing something similar), how much more calories he’s burned than me. 🙁
8 ::  Nespresso VertuoLIne Coffee & Espresso Maker with Aeroccino Milk Frother $349, $244.26- If he’s a coffee lover, you’ll be in his good graces forever with this gift.  It’s pricey, but makes damn good coffee.
9 ::  Sipping Stones – Set of 9 Whisky Chilling Rocks $24.95, $11.95 – these stones (made from natural soapstone) chill your drink without watering it down.  My husband is pretty excited over these, but he’s a whiskey drinker.
10 ::  Jawbone JAMBOX Wireless Bluetooth Speaker  $199, $99.99 – I actually gave this to my husband as a gift a couple years back and he said it’s a hit.  It’s compact, so it’s easy to move around the house, take into the garage/outside or travel with.  It comes in other colors too.  My son and I are known for jamming out and impromptu dance parties with this thing.
11 ::  DEWALT 18-Vold Drill/Driver Kit $189, $99 – every man needs one of these for all those household chores.  Unless you enjoy doing them yourself.  Then, every household needs one.

12 ::  Apple TV $69, $65.99 – We received this Apple TV from Stank (Stacey + Frank) for Christmas and it’s awesome.  You can watch all your iTunes moves and TV shows, Netflix (OITNB!! MadMen!!), view photos all in HD.  You can also access purchased movies and shows from ICloud or stream videos and games from iOS devices using AirPlay.  My 5-year old can operate it, it’s that easy.
13 ::  Leatherman Wingman Multi-Tool – for $35 you’ll probably put a pretty big smile on your man’s face with this tool set.  Apparently Leatherman is a really good quality brand.  My husband specifically picked out this one.  It comes with a combo knife, pliers, wire cutter, wire stripper, small/medium/Phillips screwdrivers, scissors, wood/metal file, bottle/can opener.  I guess guys like feeling like MacGyver.
14 ::  Swiss Army Travel Great ScanSmart Backpack $130, $49.49 (other colors)  Maybe it’s just my guy, but his obsession with backpacks rivals my obsession with bags.  I asked him why he likes them so much and he just said, “they’re good for holding my stuff.” Okay, duh, maybe I shouldn’t have asked.  I’d never want to explain why I need so many bags! 😉
I hope this helps!