I’m so excited to tell you about the new group exercise class I tried last Monday, “cardio kickboxing”.  My husband said he was going to do it with me, but when we got there, it was only women lined up, so he politely declined. (don’t blame him!) I’m so glad I tried this class- it was my absolute favorite of all the group classes I tried! 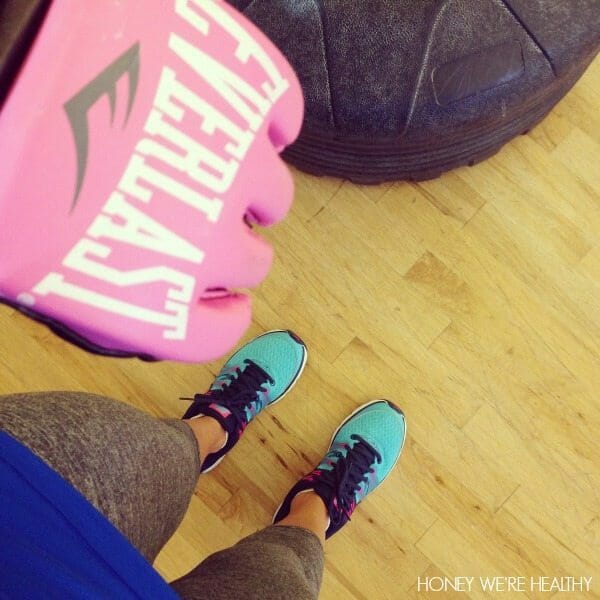 It was a new experience for sure, I’ve never worn boxing gloves before or punched a heavy bag.  The bags were all stored in one corner of the class and you had to move it to the room to use.  They are so heavy, you have to squat down with your back against the bag to even move it into position for class- that’s a workout in itself.  Most people were two to a bag, but I had my own.
The class was an hour long, but went by fast.  The instructor played awesome music and was great at explaining what combinations to do.  I watched the two women in front of me (they seemed experienced and knew what to do) so I just followed them.  I have to say it feels GREAT to let go and take all your stress, aggression, and anger out on that bag.  I put a beating on it for sure.  Even though I was wearing gloves, my knuckles were all red at the end.  I was thinking I’ll buy my own gloves for the next class and maybe tape my knuckles. 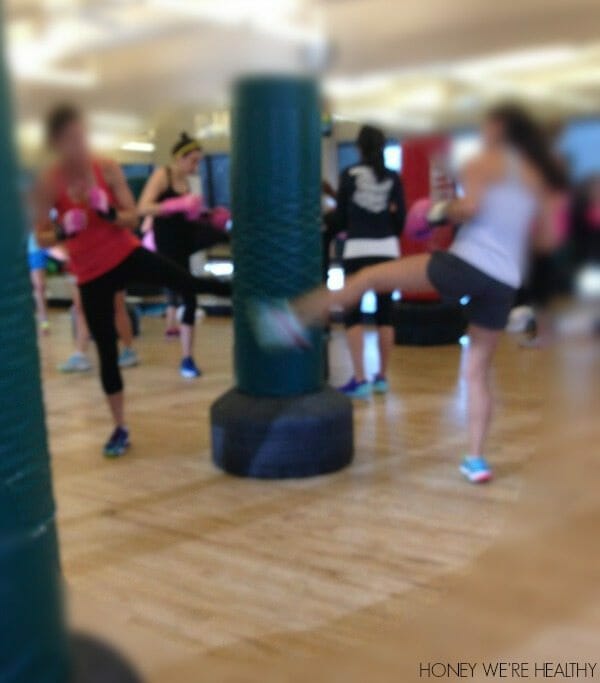 But, the problem is, I hurt my right shoulder in the process.  I woke up on Tuesday morning and it was kind of sore.  By Wednesday, it hurt to move it.  I still have a range of motion, but I can tell I strained it because it hurts to lift it shoulder height.  Passing anything to my son in the backseat of the car is a killer.  I’m so bummed because I want to go back to kickboxing, but I know I need to lay off it for awhile so it can heal.
I didn’t do any other exercise for the rest of the week, but I think I can run or do the stair master this week.  Or maybe one of the other classes and just not use the weights.  That would be more fun!
Have you tried kickboxing?  What did you think?  Any injuries or pointers to avoid injury?  I’m going to talk to the instructor about my shoulder and see what he says.