Even though my son has been out of school for about a month now, it’s only finally feeling like summer to me because he was going to a local day camp part-time.  For the rest of the summer, he’ll be at home with me (and will maybe go to camp here or there if he wants to – some of his friends from school are there and you can go by the day if you want).  I thought about putting together a generalized schedule for our days, because we do tend to operate better here with some sense of routine, but I decided against it for now.  I’ve been living by my schedule these last few months- I’m ready for a break!  We’ll just take each day as it comes and roll with it for awhile.
My son loves to play with his toys (Star Wars, Legos, Power Rangers) and watch videos on his iPad while he plays, but I want to get active with him.  I play with his toys with him sometimes, but since it’s summer and we have more time, I was thinking we could incorporate some things we might not normally do.  With his interests in mind (he’s 4), I made a general list of fun things we could do this summer.  Even though it’s called “Summer Fun Bucket List”, I’m not focused on checking things off the list as items we must or should complete this summer.  It’s just for reference . . . 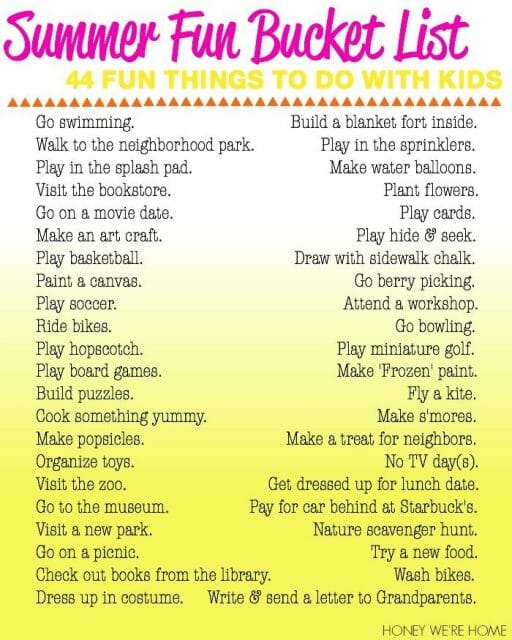 I printed and laminated the list and told my son about my idea for fun things to do this summer and he was excited to read it with me.  After hearing each item he would say, “That’s cool!” or “That would be so fun!”  But, when I got to “try a new food” he politely said, “No thank you.”  He kills me! 🙂 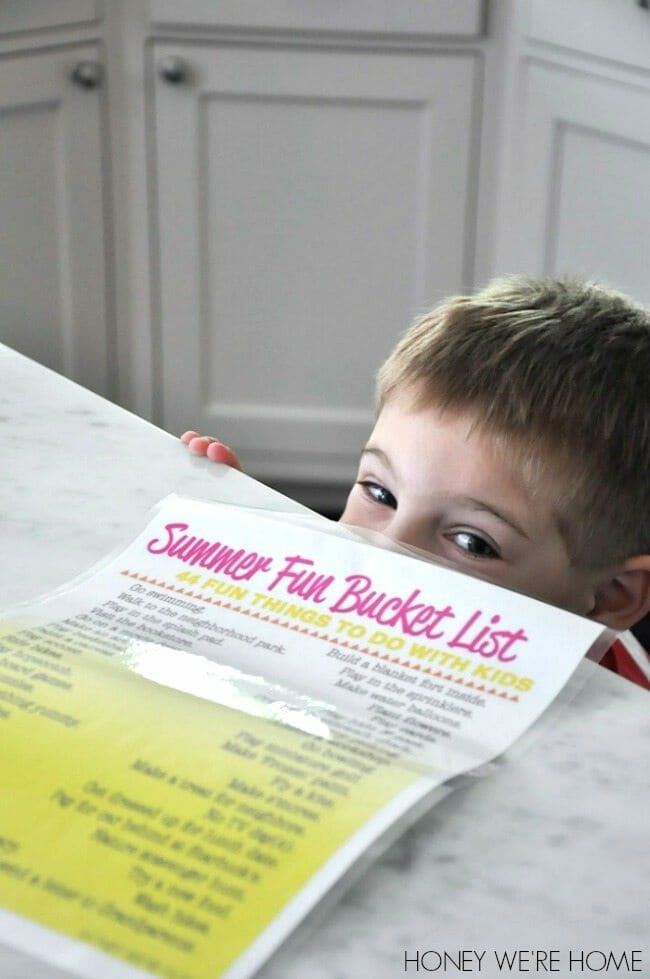 I wanted to put the list somewhere around his height, and chose the chalk wall in our kitchen at first.   But, I quickly realized it would get all chalky there – he hadn’t been playing with the chalk much anymore – until I put the list there!  I just looked at the original chalk wall post– James was 2 years old and still in diapers! 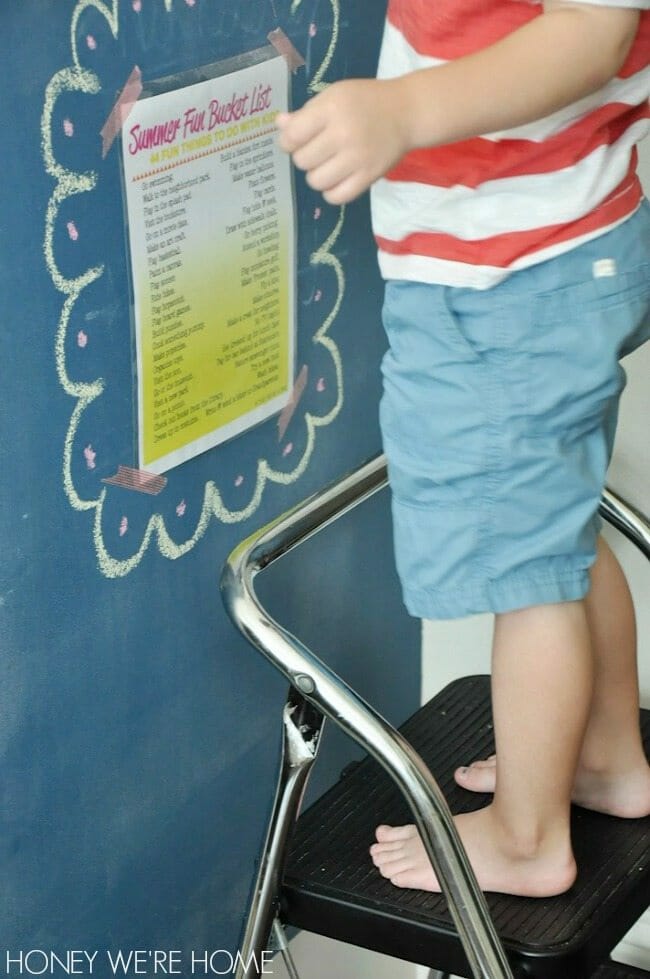 So, I moved it to a lower kitchen cabinet, just opposite our 2014 monthly wall calendar. 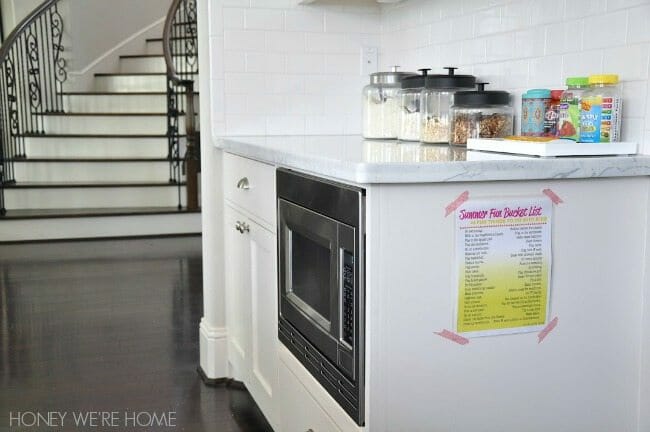 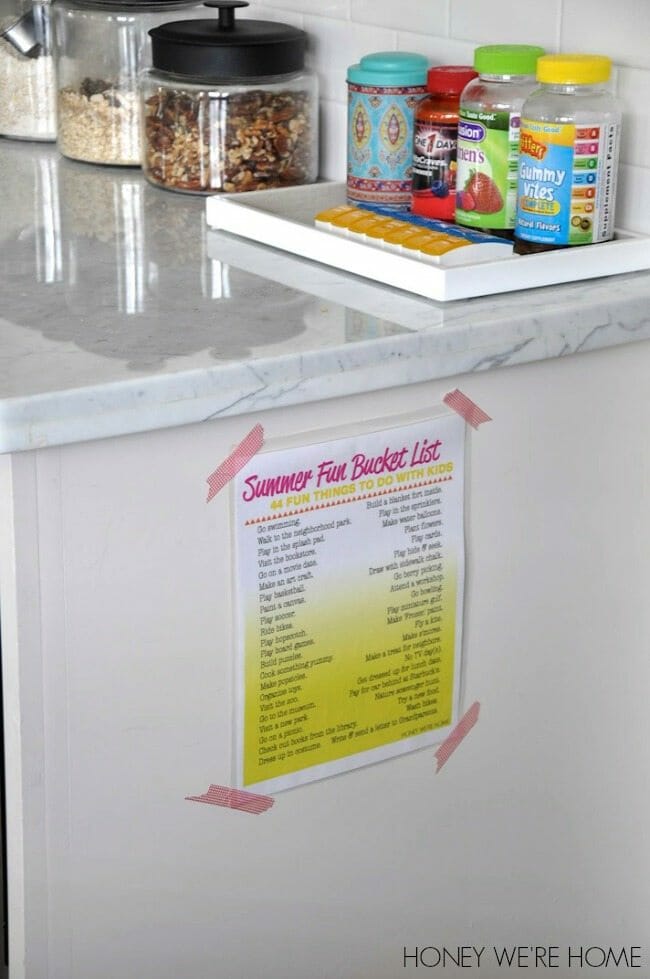 He chose “go to the bookstore” for our first outing and we did that yesterday.  Some of the things we might have to plan in advance (we’re planning the berry picking with another family), but for most of them, we can just decide in the morning or use the list later in the day if we are feeling like we want something different to do.
I made the list in PicMonkey and it was easy.  Would you like to see a tutorial on how I did it?  If you’re home with your kids this summer, how do you handle your days?
____________________
On Honey We’re Healthy: Just 2 days until my bikini contest!