I have struggled with writing this post- started writing it a million times in my head but couldn’t commit it to the blog.  I think it’s because I haven’t reached my “goal” yet, but I decided instead that it might be worthwhile to talk about the process and celebrate my progress, even if I’m still not completely back to my pre-pregnancy body.  And I’m not sure I ever will be since things like wider hips just might be here to stay.  Really, I’m okay with that since I’m pretty small-framed, it’s nice to have some curves!
Let’s start at the beginning.

All my life I’ve been in pretty good shape, but I didn’t start working out until college.  I liked the way lifting weights helped turn my skinny body into a stronger, more muscular shape.  In the six months before I got pregnant, I was working out with a trainer a couple times a week, doing a couple days of cardio, and eating pretty clean. 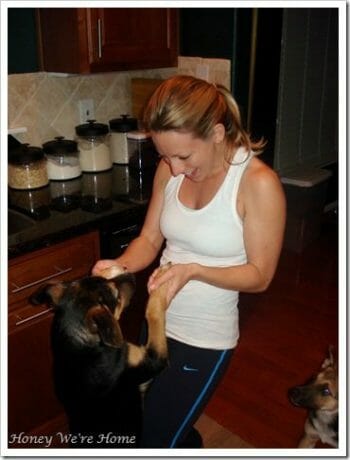 My goal was to get in bikini shape for my sister-in-law’s wedding in Vegas that June.  I also colored my hair dark brown!  This pic was taken in Vegas at the Bachelorette party.  I’m about 5’1 and weigh about 106 pounds here.

I also got pregnant that month!  Here I am about two weeks pregnant.  And morning sickness was starting to kick in. 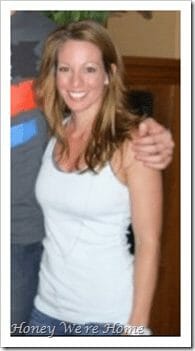 At the VERY beginning, I liked the changes to my body during pregnancy, i.e. bigger boobs!! 😉  But, then, for the first trimester of my pregnancy, I was exhausted.  I barely made it home from work without falling asleep.  I had no energy.  I stopped working out completely.  I gained weight- fast.  I remember one of my early prenatal visits and when the nurse lifted up my shirt to examine me, she kinda laughed and said, “you’re already wearing maternity jeans?”  Yes, ma’am- my regular pants already didn’t fit.

I started eating whatever I wanted.  And what I wanted wasn’t healthy.  Things like ice cream and calorie rich Mexican dishes.  And even in the 2nd trimester when my energy returned, I still didn’t work out.  I didn’t work out my entire pregnancy.  I was so miserable, even though I was relatively healthy, but putting so much weight on my small frame was hard on me.  I’ll spare you the gory details.

Fast forward to Christmas.  I remember that all I felt comfortable in was sweatpants- the thin kind you can almost sleep in.  And I still had 3 months to go!  At work, I was miserable – waddling to court and mediations, sweating, and pretty much wearing flip flops daily because my feet wouldn’t fit into regular shoes. 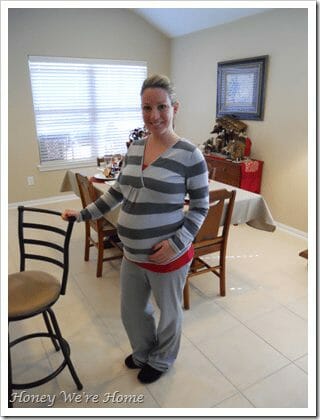 Yet, don’t let that stop me from eating the CHEESECAKE! 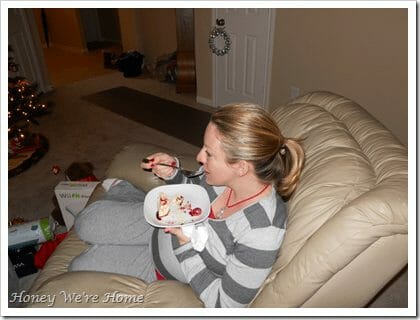 Oh, notice the Wii Fit sitting next to me? I asked my brother for that for Christmas, thinking I could start using it at home during that last trimester.  You guessed it- it’s NEVER been opened!
Mid February- still 6 weeks to go!  Didn’t think I could get any bigger? Ha!  Here I am standing on our home’s foundation, wishing the house would hurry and get finished so we could move in! 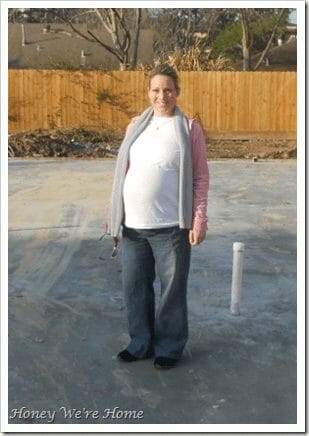 And here I am at the very END of my pregnancy, and after gaining about 55 pounds! My poor swollen face and hands!

Ahhhh, welcoming the arrival of the baby!!  After James was born in March 2010, I was so looking forward to losing weight so that I could feel like myself again.  I was just so uncomfortable during my pregnancy!!
Within one week, I lost 20 pounds.  James was 7.5 of those:)  Another week later, I had lost 5 more pounds- that’s 25 down, and only 25 to go! 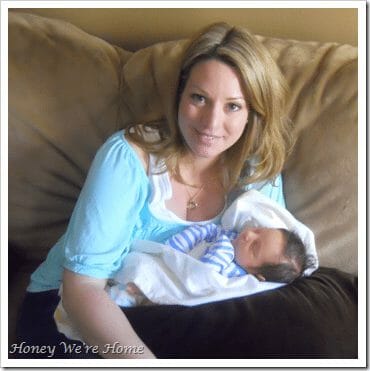 Even with 25 pounds lost, I was somewhat horrified to discover that, at this point, I still looked pregnant.  (But I’m happy to be standing in my future closet!) 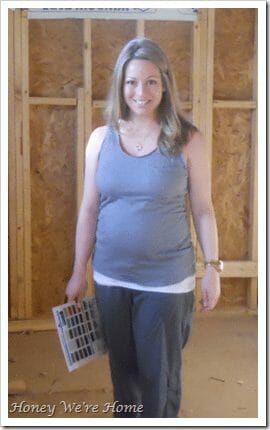 I read this book during my pregnancy, “The Girlfriends Guide to Pregnancy”, that said regarding the weight loss, “nine months up, nine months down.”  But I didn’t want to believe that.  Not me, I thought smugly.  I’ll be back in 6 months!
WRONG!
One month after James’ birth, I went back to working out with my trainer (about once a week).  I also began really watching what I ate.

To achieve the body I’d really love to have, I’d have to eat something like this:
• 6:00 a.m. Half a cup of oatmeal and five egg whites with chopped bell peppers and onions.
• 9:00 a.m. Turkey meatloaf and one rice cake with two tablespoons of cinnamon cottage cheese on top.
• 12:00 p.m. Five ounces of stir-fried chicken with half a cup of brown rice and steamed veggies.”
• 3:00 p.m. Two corn tortillas topped with black beans, pepper, onions and five ounces of grilled chicken.
• 6:00 p.m. Turkey meatloaf with a four-ounce sweet potato and one cup of steamed broccoli.
• 9:00 p.m. Six boiled egg whites, cut in half and stuffed with water-packed canned tuna (mixed with celery, onions, mustard and spices). Plus, one toffuti pop.

But since I’m not trying to get that muscular, or that lean, I eat a modified version that looks more like this:

Obviously, this is not consistent.  Sometimes I eat better than others, but I am good at eating small portions and stopping when I get full.
By Mother’s day, 2 months later, I was starting to feel pretty good, but still had a belly and don’t remember what I weighed. 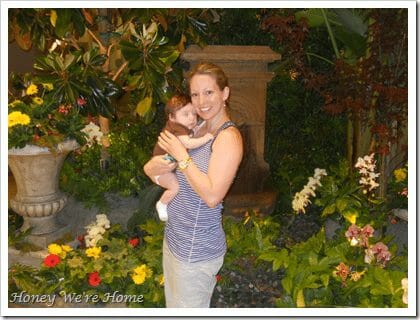 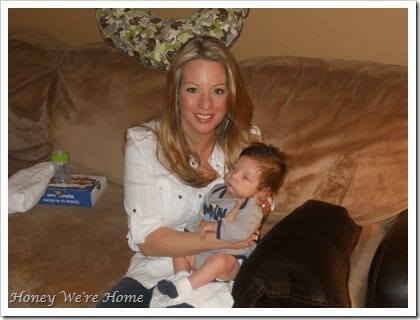 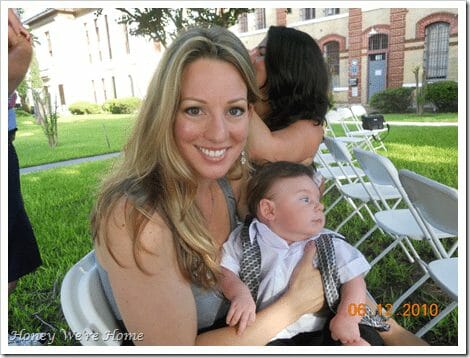 By this time, (7 months), I had lost 40 pounds (Yay!), but with only 15 pounds to go, I kinda lost steam.  Then came the holidays and the toffee and I hit the wall.  I stopped working out with the trainer and just enjoyed all the food that goes with the holidays, probably adding on about 5 pounds.
November 2010
We bought a running stroller, but I only used it a couple of times. 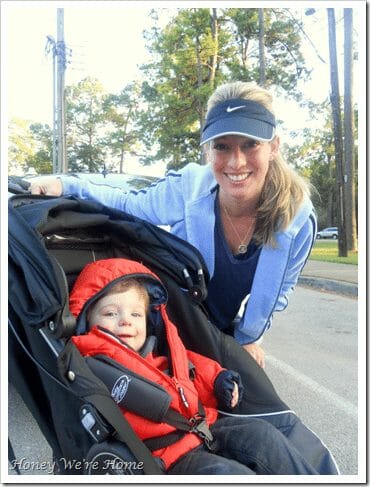 January 2011
With two months til James turned one, I was really hoping to lose those last 10 pounds.  But although my weight was coming down, I really needed to tone up.  My arms were actually pretty strong (I think from lifting a carrying a 20 pound baby around)!  I started back up with the trainer (still only once or twice a week) and she stressed that I really needed to be doing my cardio and start eating more often (I’d gotten into a habit of eating only breakfast, a light lunch, having a Starbucks in the afternoon and then a not-so-great dinner).
So I started jogging again.  And eating better. 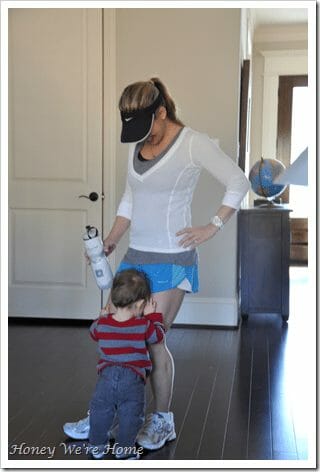 And now, I jog with James in the running stroller a few times a week.  James usually falls asleep and I love the workout and the clarity and peace of mind I get after a run. 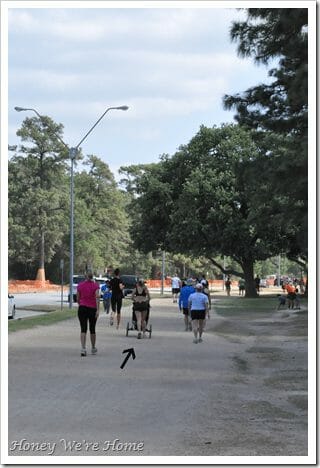 I love being outside and we’re fortunate to have a park with a 3-mile track nearby. 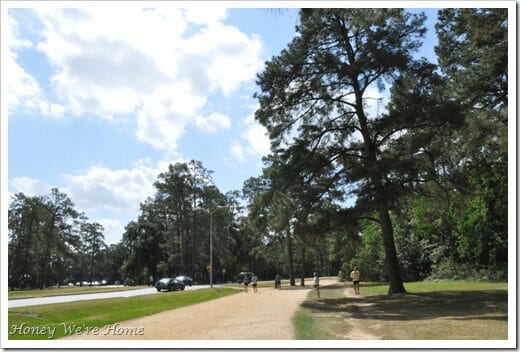 Last weekend, we went to the beach.  I wore a bikini and didn’t feel embarrassed.  I still am not down to my pre-pregnancy weight- 5 pounds to go, but I’m honestly not concerned with that.  I’m more focused now on gaining muscle, and increasing my cardio.
My brunette hair has been properly dyed back to blond, has grown and been getting regularly cut by my new stylist, and I finally feel like myself again (and my son is almost 14 months old now!)  So 9 months up and 9 months down would’ve been great, but it’s taken me a bit longer.
These pictures were taken almost exactly one year apart. 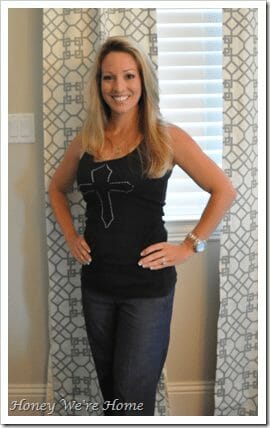 *here’s an updated photo from July 2011, taken during a boot camp session. 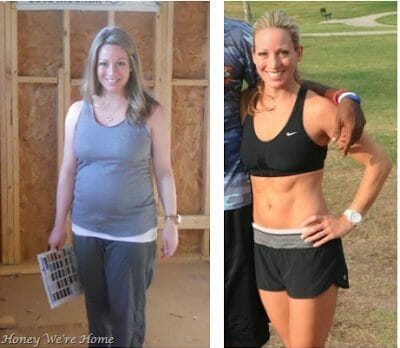 I shared my story because I know that when I was pregnant, I was really interested in what was going to happen to my body during and after pregnancy.  I would like to be able to say I was all glowy and never felt more beautiful, but for me, the exact opposite was true!  Maybe I’m not that evolved or self-actualized or whatever.

We want to have another baby in the future, so hopefully, I will do pregnancy a little better next time- so that I feel better and enjoy it more!  I would love to hear from you and what worked for you, what didn’t, how you felt about being pregnant, and any other tips you might want to share.UPDATE:  As of May 2015, I’m training for my 2nd NPC Bikini Competition.  You can follow along on my recent posts here: